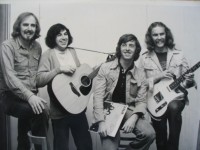 In the late 1960s contemporary Christian music in the UK was in its infancy. It took the pop rock revolution of the 1960s to give confidence to those with more contemporary music leanings to try and awaken the slumbering Church. I clearly remember the severe threat that even acoustic folk music presented! A few early pioneers had the courage to suggest the use of "Kumbaya" in a service, accompanied by guitars. How clumsy and awkward that song sounded when, in a spirit of compromise, the minister insisted the organist play it too. There was no acknowledgement that some of the faithful might appreciate more modern music. It was as if there was only one acceptable form of church music - organ and choir. It had served the Church well for over 200 years and many folks asked what was the problem? Why the need to change? And should the Church use worldly music anyway? But a musical revolution was beginning to ferment in the churches.

I joined the revolution as one of those early pioneers shortly after becoming a Christian in 1966. Inspired by hearing a Manchester Christian group called the Calvary Links, I found myself at Bispham Parish Youth Fellowship just north of Blackpool. Some Links fans there had formed their own Christian beat group. It was a real novelty in those days, reflecting the guitars, drums and bass format which had come to dominate the mainstream music landscape. The group was called The Revelations. The lead singer had just left. I had just arrived. I was a shy 16 year old who loved Simon & Garfunkel. I was asked to audition. My only qualifications were that I could sing - I'd been a church chorister until my voice broke - and I had a new found faith. I got the part. I found out later that I was the only one who auditioned!

There were very few Christian bands with drums in the mid to late '60s. Churches were afraid that modern "jungle" rhythms had tribal voodoo connections and were inspired by the Devil. They pulled up the drawbridge and hoped the Christian beat group fad would soon die and that the Church would soon return to the more acceptable format of choir and organ. Some churches even today, in 2008, have the musical drawbridge up. Joining The Revelations was my first opportunity of fronting a band. We had a regular gig in The Shippon, a disused cow shed next to the church hall which had been converted for "the youth". It was not unusual to squeeze 80y or more teenagers in for pop and crisps, a spot from The Revs, and an epilogue from a real Rev. Occasionally the band would have an outside engagement, but the churches we visited generally were not geared up for this. Trying to arrange amplifiers, drums and a PA system around pulpits, pews and the chancel steps was never easy, and finding an earthed three-pin socket almost impossible! But for us it was exciting, pioneering stuff and helped us to communicate the message in a more relevant way to our generation. I had no idea then that this tentative beginning would eventually lead to appearances in some of the largest concert venues in the UK.

Locally there was an organisation called Blackpool Christian Businessmen's Committee. They were committed to promoting the Gospel. They did this through evangelistic events, campaigns, talks and youth weekends. Monthly traditional meetings were held at the library lecture hall in Blackpool and comprised of a choir plus a guest speaker.

The demand for a more contemporary approach grew and more Christian musicians emerged. The businessmen opened an occasional coffee bar behind the promenade in downtown Blackpool, called The Net. Today it would be considered uncool and corny. The ambience was provided by fixed coloured spotlights and draped around the walls and ceilings were real fishing nets from Fleetwood (where there was still a fishing industry). The Revelations played there on a number of occasions. To us it represented a major gig, although I don't think the word gig had been invented then! This was all in the days before anyone had heard of health and safety. A few months after our last appearance at the Net coffee bar, the whole building collapsed, fortunately with no one inside!

Coffee bars with juke boxes and occasional live music were great places to hang out with friends if you didn't fancy the youth club disco. I was blissfully unaware of the darker goings on beneath the surface and of the emerging drug culture. The pop culture was captivating. Leading spokesmen and songsmiths like Bob Dylan and Paul Simon seemed to sum up my own confusion or feelings on so many occasions. I also liked The Beatles, The Stones and The Who, and generally anything a bit rebellious. So I admire the efforts made by those Blackpool Christian Businessmen to provide a wholesome, non-threatening venue, in the heart of the town centre, with no particular denominational association. The only agenda was for young people to have a place where they could meet informally with friends and share their faith.

At that time I remember selling my entire collection of Stones vinyl albums and singles in the late '60s for a few quid. I didn't realise that 40 years on the Stones would be international icons of the music industry who continue to sell albums and pull in crowds at concerts, or that my collection would probably have been worth a small fortune by now on Ebay.

By 1968 I had written a handful of songs. My first band, The Revelations, evaporated as friends left for university and I was left with no outlet for my music.

There was also an aching void in my life resulting from the death of my father when I was 17. Into that void came a band of brothers and an opportunity. It was at a Blackpool library lecture hall event that I met the guys who would later become my close friends in Canaan. I was booked to sing a couple of songs and so were they.

Dave Lloyd had been running a weekly coffee bar in Lytham with Dave Lewis, and they had been introduced to Gus, a new Christian. As music was the common denominator, and Gus was a mean guitar picker, the three of them met and began to play regularly to the disaffected youth of Lytham at The Hut. The Hut was a disused storage building in one corner of a builders' yard which belonged to the Lloyd family construction business.

After the library lecture hall gig, the four of us began to meet regularly at The Hut to learn songs, and it was Gus's semi-pro musical experience which pulled the rest of us up a notch or two from our amateur enthusiasm, to the point where we could see the potential for sharing our faith through music.

Early influences for me were The Moody Blues, Crosby, Stills and Nash, Neil Young, The Eagles, and anything melodic or country rock. A close harmony acoustic/electric style developed and we managed quite successfully without a drummer for a couple of years. Drums would add a considerable complication to the whole thing. Transport would become more difficult, the general decibel level would increase and we would have more problems in hearing each other singing and playing. There were no in-ear mics in those days.

The basic line up was Dave Lloyd on bass, Gus Eyre on lead guitar, Dave Lewis on 12 string acoustic guitar, mandolin and harmonica, and myself on lead vocals and guitar. We mainly used songs written either by myself or Gus, but we all worked on the arrangements. There is something good about working in a creative team; one idea sparks another from someone else; there is a freedom to think outside the box and try something new.

The name we initially decided on was Threshold, occasionally mistaken for fleshold. It later became Canaan, occasionally mistaken for Canine. The names of some 1970s Christian bands were quite inventive, like Out Of Darkness, After The Fire, and Water Into Wine Band; others kept to more scriptural references such as The Advocates from Lincoln, Trinity Folk from Liverpool (later Parchment) and ourselves. One early Christian beat group I went to see in Preston in about 1967 was called (no joke) The Cobblers. I don't think they'd thought it through.

Just googled Canaan after finding their first album in some LPs I am sorting through. I recall it being a very radical for a of Christian music back in the day. Enjoyed the article and another memory bump was Chorelana, I think they came to my childhood church Roxeth Green Free Church, and inspired me - 43 years of playing bass and counting!

I became a Christian at one of your 'gigs'!! It was at Springfield Greenlands Methodists Church in maybe 1975? There was a guy giving his testimony who spoke about how he had found Jesus when he was in prison. Don't suppose you know his name do you? I've often wanted to tell him what an affect it had on me. Thanks for all you did all those years ago.

It's great to remember Canaan.I was a bit naughty in I the past I played some of their songs at live gigs and the congrigation found them rewarding.Thank you and bless you.K.G.

Any tips on guitar playing from Gus would be welcome.

hi guys.bought your albums when they first came out,i still play them and I am continually blessed by them, so much so that i would like your permission to learn and sing some of your songs at my church,so others can be reminded and blessed the same way the lord has blessed me through your music. i look forward to recieving a reply by e.mail from you. your brother in christ jesus. bob

I am looking for a track listing for a cassette release CW8 "As The Light Is"
In particular tracks 6, 8 & 11 which i can't identify can anyone help?

Gosh, what a trip down memory lane! Mention of all those names brings the memories flooding back.

Good to hear the history. Brings back good memories of University at the time. I remember the LP and would like to buy a copy, vinyl or CD. Still have some faith, but the clarity seems to have gone!

Also would like a cd copy. i recorded my vinyl onto tape but not a good copy. I knew Gus Eyre - he was influential in my early years as a christian - a humble man - very talented musician who has been instrumental in bringing many to Christ.
To follow on from Richard Mansur's email - I've got a pair of muskin shoes, I aren't got much money but I sure like sing the blues.

Am a huge fan of the first Canaan lp. My scratchy vinyl is barely playable. Any cd release planned? I've pined for that for YEARS!

For more on Canaan visit the Canaan artist profile