We were not alone in our hopes and pioneering efforts. A movement had started and was greatly shaped by a group of young men in the South East, Geoff Shearn, Peter Meadows, David Payne and John Webb, who first started Buzz magazine and then an organisation called Musical Gospel Outreach (MGO). Their MGO weekends in Swanwick were an annual highlight and showcase for all those involved in contemporary Christian music.

For one year back in 1971-2 we had a manager for the band: Terry Ascot was a British Rail structural engineer working on the introduction of overhead electric power lines for the main north-south rail line - a dream job for a young man - blowing up bridges. Leaflets produced by Terry, who is now CEO of Middle East Media, were a significant improvement on the tracts of the time. There was one leaflet called The Permanent Revolution with a cover picture rather like a Che Gevera poster that was around at the time and of course everybody took them. Terry really shaped us up and made us think about communication.

What Terry taught me was that you've got to make some references to the world we live in and communicate relevantly. We can't just jump into conversation about salvation and repentance and expect everyone to get it. We adopted that idea in the sense of trying to get a music style and presentation that was reasonably acceptable. What he achieved, and the principles he demonstrated in the space of 12 months, has remained with me for the rest of my life. 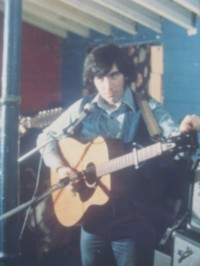 Terry's passion was communication and through the organisation he created, Middle East Media, he initially pioneered a youth magazine in many Middle East countries, and eventually satellite television programmes beaming into the whole of the Middle East. Today it is a massive ministry, sensitively and creatively communicating elements of the Christian message in places still officially closed to Christian influence. It's a shining example of modern missionary work, involving people from those cultures, communicating in a way people can understand, using the latest technology.

In the early '70s Canaan gained profile through university and college gigs. Bigger and more creative opportunities came, especially during the Festival Of Light events. I remember playing at various fete days in parks, in fields, on the backs of lorries and on a stage on Llandudno beach, where we had a race against time to complete our set before the tide came in.

But by far the most significant impact was locally in June, July and August each year as Canaan got involved in open air witness on the promenade in St Annes. Originally it was typical evangelical stuff of that era - church going folks in Sunday best gathered round preachers shouting loudly. Their voices were occasionally boosted by primitive car battery powered amplification, proclaiming the salvation message and the need for repentance. Rousing Billy Graham Crusade hymns would be sung accompanied by early Casio electronic keyboards. It was all well intentioned, but not many stopped to listen.

Eventually, Canaan took over the Sunday afternoon slot and added a Wednesday evening. It was all done in a sheltered alcove opposite the local open air swimming pool, from where we ran a long extension cable to enable us to plug in our gear. A report in Buzz magazine by Neil Mathieson at that time reads: " . . . the band is close to that of the old Crosby, Stills and Nash. They dished out hand outs each week and soon attracted quite a number of the hairier and trendier locals, sometimes drawing as many as 300 people."

Many teenagers made a response to trust God and start a new life in Jesus at that time. I have a newsletter from that period which band secretary, Wendy Eyre, produced. The letter requests prayer for a list of over 20 youngsters who had recently responded to the Gospel message. At that time, of course, the Church wasn't generally geared up for an influx of long-haired pink-flared teenagers! Initially Gus and Wendy set up Bible studies in their home, and eventually several homes, to facilitate some teaching and a meeting place to encourage these new Christians.

Whilst the main emphasis was on live concerts, Canaan did manage to capture their sound on vinyl. In 1970/1 we clubbed together and paid for some studio time and produced a demo EP (Extended Play - remember them?). It was this demo EP that Terry Ascot waved under the noses of MGO (Musical Gospel Outreach) at Swanwick and somehow managed to wangle us a spot on the main stage.

In 1972 MGO, who later morphed into Kingsway, invited us to RG Jones Recording Studios in London to make our first professional album. It was on the Dovetail label and inventively titled 'Canaan'. The producer was John Pantry, a new Christian then who had previously been an artist in the mainstream and is today a regular presenter on Premier Christian Radio. His experience as a producer helped us enormously with song arrangements. During the 1980s I met John again when I was involved in writing songs and recording work for Ears And Eyes Production Company. He has always been a great encourager.

The first Canaan album in 1972 showcased the songs from the band's current repertoire, which opened with Gus's "Rock And Roll Gypsy", taking in my songs "Seventeen" and "Jesus Revolution", and ending with a 10-minute trilogy inspiringly entitled "Death Gave Way". This was a song we used to finish our concerts with, and at the end of which we were completely knackered. More like "Life Gave Way" I think! The title of one of my songs was toned down from the rather risque "Women, Wine And Song", to "Seek First The Kingdom" as it was early days for contemporary Christian music and MGO didn't want to be too controversial. The recording opportunity made us practice harder, polish up lead guitar parts and harmonies and become more concise in our songwriting and arranging. This reckless investment by our heroes in MGO was a massive boost to our confidence, professionalism and profile.

A second album 'Out Of The Wilderness' followed in 1975, recorded at Morgan Studios in London for Word Records. This album captured several of Gus's songs including "Loving Things" and "Praise The Lord", which were greatly used at our concerts. My songs included "I Will Return", "Burning My Bridges" and "The Stranger", a poignant song about the Easter story, inspired by a Scripture Union cartoon film set in the wild west.

Amongst my memorabilia I have a prayer and newsletter produced in July 1972 by Gus's wife Wendy. It was issued to the 44 people who were praying for Caanan. The letter outlines 47 events in the first half of the year. The band branched out into the secular world including coffee bars, cricket clubs, YMCAs, colleges, schools and the Gateway Theatre, Chester where about 400 young folk turned up. Also listed was a concert with the late Larry Norman and Judy McKenzie at Lancaster University, a gig at Salford Youth Centre and the Kings Arms Pub in Blackpool. Other venues included Clitheroe Castle and the regular open air concerts in St Annes. The letter also mentions a Coffee Bar gig on May 22nd 1972 which was the fourth consecutive booking that weekend. Wendy also noted that we were all feeling pretty shattered and that we were regularly playing to crowds of between 200 and 400.

On June 3rd 1972 Canaan played to 3000, our biggest audience to date, at Westminster Central Hall, London, for an MGO/Buzz produced concert. There was a report in the press in which Michael Jacobs wrote: "The evening started with music from the excellent Canaan, spoiled only by some erratic drumming. The group proved to be as accomplished live as they are on record, and they provided the event's musical highlight."

Graham Kendrick has contributed significantly to the development of contemporary Christian music in particular for worship. He too was given an opportunity by MGO. Writing in Buzz Magazine about one concert, Neil Mathieson stated: "Those fortunate enough to have been at the Graham Kendrick concert earlier this year will have sampled the delights of the North Country band Canaan, when they played a set of fine country rock music."

Just googled Canaan after finding their first album in some LPs I am sorting through. I recall it being a very radical for a of Christian music back in the day. Enjoyed the article and another memory bump was Chorelana, I think they came to my childhood church Roxeth Green Free Church, and inspired me - 43 years of playing bass and counting!

I became a Christian at one of your 'gigs'!! It was at Springfield Greenlands Methodists Church in maybe 1975? There was a guy giving his testimony who spoke about how he had found Jesus when he was in prison. Don't suppose you know his name do you? I've often wanted to tell him what an affect it had on me. Thanks for all you did all those years ago.

It's great to remember Canaan.I was a bit naughty in I the past I played some of their songs at live gigs and the congrigation found them rewarding.Thank you and bless you.K.G.

Any tips on guitar playing from Gus would be welcome.

hi guys.bought your albums when they first came out,i still play them and I am continually blessed by them, so much so that i would like your permission to learn and sing some of your songs at my church,so others can be reminded and blessed the same way the lord has blessed me through your music. i look forward to recieving a reply by e.mail from you. your brother in christ jesus. bob

I am looking for a track listing for a cassette release CW8 "As The Light Is"
In particular tracks 6, 8 & 11 which i can't identify can anyone help?

Gosh, what a trip down memory lane! Mention of all those names brings the memories flooding back.

Good to hear the history. Brings back good memories of University at the time. I remember the LP and would like to buy a copy, vinyl or CD. Still have some faith, but the clarity seems to have gone!

Also would like a cd copy. i recorded my vinyl onto tape but not a good copy. I knew Gus Eyre - he was influential in my early years as a christian - a humble man - very talented musician who has been instrumental in bringing many to Christ.
To follow on from Richard Mansur's email - I've got a pair of muskin shoes, I aren't got much money but I sure like sing the blues.

Am a huge fan of the first Canaan lp. My scratchy vinyl is barely playable. Any cd release planned? I've pined for that for YEARS!

For more on Canaan visit the Canaan artist profile