Caroline: British-based gospel singer debuting with 'Here I Am' 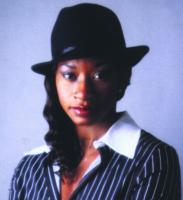 The sound of gospel divas has become one of the most popular sounds in music. Though these days more often than not the sound has been taken over by mainstream pop artists choosing to use their vocal chops to put some drama into a big ballad, the style and the emotion comes from the Church. R&B music is packed with those who learnt to sing in the Church and then took their talents to the world.

In recent times, down in London, there seems to be a resurgence of female gospel singers choosing to record independently. Here we profile four singers and although the results are four very different albums, there is no doubting the talent and the desire to communicate something powerful in a memorable way.

When it comes to God giving a singer a song, it seems it can happen anywhere! At the bus stop perhaps or even in Tesco's car park. Caroline wrote "I Am The Lord Your God" when she was going through a bad time. "I was really discouraged with myself," she remembers. "I was talking about making a CD but nothing was happening. I was starting to doubt my abilities. I was starting to think 'Where's God? Where's he at? What's happening?' I was basically having a good old pity party in the car. My husband had gone into Tesco to buy something, and all of a sudden this song just came out of nowhere! I didn't have a pen or paper and it was really powerful. A lot of people have been really touched by it as well. So it wasn't a wasted experience. It was a really dark time. I nearly did give up, but God had this way of just keeping me hanging in there."

And now, having persevered, Caroline has released her debut album, 'Here I Am'. It's packed with fresh British R&B grooves, hooks and sounds married to a strong gospel message. One of the themes that runs through the album is God's restoration. She explains, "God reaches out to us. You don't necessarily have to be a Christian. You could be someone who's missed the way, you could be someone who's been searching, someone who's lost. It's just an invitation. My way of saying, 'This is where God is at. He's very down-to-earth and he's there with you, no matter who you are and where you are.'"

That theme is obviously important to Caroline. "It's something that people don't realise." She explains, "They have this opinion of God, that he's a far off person, and that's not the case. That's not been the case with me anyway. I think that's the side of him that he's really revealed to me and I want to share that with others. I'm a down-to-earth, practical person. I don't like to do things necessarily in the normal sense. So in a way, it would seem that it would be difficult for me to be reached, but I've not found that to be the case. I've found God has always been able to get to me, wherever I'm at and whatever situation I'm in. He's just been very practical and down-to-earth with me, giving me wisdom when I'm at work by his Holy Spirit. He's given me direction when I've been in awkward places in my life."

In a culture where many people understand religion or going to church, Caroline is trying to take people deeper with her music. "What I'm trying to get across on this CD is that we should never limit God, because he can reach us, no matter where we are and who we are. You might feel insignificant but that's not the case with God. God thinks everybody is significant. He has a plan and a purpose for everyone. I beleive he's called me to let me know that."

For more on Caroline visit the Caroline artist profile