Down the years Cross Rhythms has spoken several times to Cathy Burton endeavouring to keep our readers up-to-date about the hugely talented singer, songwriter, session singer and worship leader. But such is Cathy's seemingly never ending creative diversification that once more a chat is necessary. I spoke to Cathy shortly before the start of The Storytellers Tour where with fellow songsmiths Northern Ireland's Nathan Jess and Scotland's Steph Macleod Cathy will be singing.

Chris: Over the last years we've seen you mostly leading worship and appearing on CDs, the latest being your own newly released 'Live At Spring Harvest'. You and Paul [Cathy's record producer and soundman husband] clearly attend lots of festivals and events.

Cathy: We certainly have over the years. We don't do heaps and heaps. We spent most of our summers - in my 20s and 30s - at Soul Survivor and New Wine. We worked out we'd been living on that site about two years of our life. With family and stuff, I haven't done as much. I've led at Spring Harvest for ever in various guises. I tend to gig these days with a charity called Mission Aviation Fellowship (MAF). We go round churches doing singer/songwriter things. That's going on, but it's not something people get to hear about as much. I'm doing Big Church Day Out as a singer/songwriter. Even though I do release these worship-based albums, I've also been having my dance releases, and 'Searchlight' - that's definitely not congregational.

Chris: Down the years of course you've done hundreds of recording sessions. Do you remember featuring on the album 'Into Your Dreams'? I've played it many times for my children.

Cathy: Is that the lullabies project? Glad to be of service. I think I sung a Joanne Hogg song. I remember thinking, "This is such a beautiful song."

Chris: You did write one or two.

Cathy: I think I wrote one and co-wrote one. It's such a long time ago, I can't believe I remember. 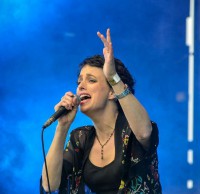 Chris: You've done so many sessions. Tell me about your work in dance music.

Cathy: I have got dance music releases that come out quite regularly - various remixes. I work with a producer/writer in Holland called Raz Nitzan. We tend to come up with the tracks, and he finds homes for them with various deejays. You can find more information by checking iTunes, Spotify. If you go on YouTube and put "featuring Cathy Burton" you come up with loads. I've been doing vocals on dance music for six, seven years. Although it might look to the Church that I'm only following the worship route - I'm leading worship in church, helping them locally - I'm still doing the other stuff. The biggest dance music release I've done is "Rain" with a guy called Armin Van Buurens. He's a massive deejay, but in the UK we don't really hear about those releases. It's in the trance genre - EDM. I've also had a really big song, "Hearts Connected", with Omnia. The track takes about 10 minutes to get going.

Chris: Cross Rhythms is about to send a whole team of reporters off to the Big Church Day Out and Tony Cummings is very excited about what God is going to do there. You've played BCDO several times, haven't you?

Cathy: I played the first year in 2009 when it was just a one day event a Sunday. It's grown into two days of course. The things to do just get more and more every year. It's a great a family [weekend] out. It's amazing. Last year I did took the whole family and it was a little bit fraught for me. So this year I'm just taking the big ones - me, Paul and Izzy. The boys are going off to their grandparents.

Chris: Tell me about the Storytellers Tour which I understand starts on 9th June.

Cathy: We are doing four dates, starting off here in Chichester, where I live. It showcases songwriters Nathan Jess, Steph Macleod and myself. We all write songs about life and love and faith - whatever. I haven't actually performed with Steph and Nathan before. But I've heard Steph and Nathan's stuff; they've both worked with my husband Paul on albums and I admire their voices. They've both got guitar-skills to be envious of too and Steph is an amazing performer. I saw him at New Word Alive about five years ago, and he just took my breath away. He's got such an amazing story of coming to faith. Nathan's from Ireland; he stayed with us for about two weeks when he did his album. He's really talented. When you're a songwriter, you write songs out of experiences, so that'll all come through in the evenings. We'll be chatting, probably interrogating each other a little bit.

Chris: Your 'Live At Spring Harvest' album is out now through Elevation Records. As well as your cover versions of "Oceans" and "Waiting Here For You" there's a lovely track called "Safety In His Arms". Tell me about that.

Cathy: It was truly a bit of an improvisation on the day: it's not a song that I'd written to record - no intention of even getting it on the album - it was just in the moment. I'd woken up that morning with a bit of a song in my head. At Spring Harvest you have to work with complete strangers. You don't meet the preacher until the day - you tend to have a little meeting - and God sometimes puts something on all of our hearts and brings it all together. I said, "I've had this song today about being in the Father's arms" and [the speaker's] preach was on just that. It was like, "Should I sing it, shouldn't I sing it?" We went through it once in the rehearsal. I said, "I think I'm going to do something like this." But then in the meeting I did something completely different. I think I even played in a different time signature! The band were like, "What are you doing?" It is improvisation, with a bit of structure; I was just making it up on the fly.