Cathy Burton: The singer/songwriter who's released the 'Burn Out' album 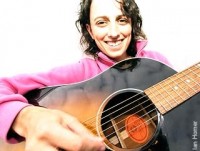 Mike: You used to be in the band Blueberry and there was the perception that it was kind of "your" band. Would you say that was so?

Cathy: "No.They were my songs but I wouldn't have said it was my band. It was an equal thing, we were all in it together but I was writing the songs at that stage. I did a bit of co-writing with Dan Boreham but mainly we were singing my stuff. We were still a band though."

Mike: What have you done since Blueberry ended?

Cathy: "I have got a publishing deal now actually! It's really brilliant. They've helped me a lot financially just to get some demos recorded. That's what I've been doing, simply recording demos. Last year I showcased for a lot of labels. It all sort of came to a head and there was a big gig at the Borderline. I was supporting Inspiral Carpets and about 12 industry people showed up! It was just incredible! You kind of think. 'This is it, this is it. I'm going to hit the big time!' and all that sort of thing. But nothing actually happened at all from it! The phone did ring. Then I did some more gigs in the Cashmere club in London. They were really brilliant, it was a really good experience. Then gradually, the phone stopped ringing. It wasn't like they said, 'Oh I saw her and she's rubbish!' it just sort of...fizzled fizzled fizzled and nothing's come of it, which I have to say now, looking back on it, I'm quite relieved!"

Mike: With the publishing deal, have you got anybody in mind to record one of your songs?

Cathy: "My mum wants Ronan Keating to sing one! I'm not sure about that! I honestly don't mind. Anybody that has got feeling and that connects with the songs would be great. Anybody!"

Mike: You have plenty of connections with Delirious?. How come you're not the first act to be signed to Furious? Records?

Cathy: "I don't know! I honestly don't know! I've chatted with them and they're very supportive of what I'm doing. This year, I think it was a bit of a shock to them that I'd even recorded. I don't think they saw that coming! It's not as if there's any ill feeling. They're my mates more than anything. I'm in church with them, I'm mates with all their wives and their kids. I think that they're really pleased that I'm going for it. I think that if they can help, they definitely will, whether that's a deal or not. I'm happy because I know I've got their support. You never know, they might hear the album and go 'GIVE IT TO US!' or they might hear it and go 'Yeah! Go for it!!'"

Mike: Do you have a room at home that you can write in or is there somewhere that you go?

Cathy: "I just write in the lounge or whatever. I tend to write when Paul goes away because there's a lot more peace and silence! There's not so much to think about and no dinners to cook! So I tend to do it then. It's really weird though. I'm up at midnight, lying in bed thinking, 'Ah! I've got a song idea!!' and I grab a guitar and am writing 'til 2.00am!"

Mike: Was it fun recording the album? Your husband Paul worked on it with you.

Cathy: "It was really good fun. We spent about 10 days being in a really relaxed environment and chilling out. Getting the structures of the tracks and getting the creativity flowing. After that, it just went mad and got really intense. So we hardly saw each other. I didn't even realise I was working with him! It was just another meal to cook!"