One time frontman for thebandwithnoname, Cross Rhythms radio presenter, author of numerous teaching books, presenter on God TV and dynamic leader of the Chip Kendall Band, there seems no stopping the American-born honorary Brit. To catch up on some of his past, present and future I threw 28 questions at this unique communicator.

Tony: Where and when were you born?

Chip: I was born in Gainesville, Florida, USA, exactly one week before Christmas, 1977.

Tony: What kind of childhood did you have? 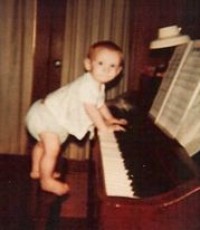 Chip: When I was one week old, I played baby Jesus in our church's Christmas play. My mother had to play Mary the mother of Jesus, having just given birth! My dad was the worship pastor (and the play's director). We did a lot of plays and musicals at our church, when I was growing up in Florida. My sister and I had tons of experience being on stage, and this was before we were even in our teens. The church steadily grew to around 2000 people. We had our own radio station and it was my dad who was organising the big productions we'd put on in our local football stadium for the community.

Tony: How and when did you make a Christian commitment?

Chip: I don't remember this, but my mom says it happened when I was around four years old. She was driving the car, pulling away from church with me and my little sister in the back. I said, "Mom, everyone at church was talking about having Jesus in their heart. What does that mean?" She took that as her cue to share the Gospel with me, and in the end both me and my sister prayed the prayer of repentance. I can honestly say that since then I've always genuinely desired to do what's good and right. I'm not saying I'm perfect! But I know a lot of ministry kids end up going off the rails and rebelling, and that's just not my story. All credit to Jesus... and my parents. I heard a ton of stories when I was growing up, from people who made mistake after mistake in their lives, living in the consequences of their bad decisions. I guess I just decided early on that's just not the kind of life I wanted.

Tony: Yours was a ministry family. Give me your earliest memories of Kendall Family performances.

Chip: God called us to move to Israel as a family when I was 12. I guess you could say the Kendall Family ministry was 'born' in the months leading up to our big move. We did a little tour of churches raising prayer and financial support. We would sing together and take turns talking about what God had been saying to us. I used to refer to us as a four-man-tag-team-preaching-machine. It was unique, and a lot of people were really touched seeing us minister together as a family. Eventually we made a few albums and over the next seven years we ministered in around 25 nations together. Our usual set would include: my dad leading some worship, my sister and I singing a few hip-hop tracks together, me doing a mime piece set to music, all of us singing a few songs together, and of course all of us taking turns preaching. A lot of my memories involve having to get up super early on a Sunday morning so we could minister in three or four different churches that day. Usually after lunch I would feel so tired, and the last thing in the world I'd want to do would be to get up in front of yet another group of people and inspire them to worship. Inevitably Dad would ask me to do a mime piece and my body would be screaming 'no way!' But God would always reward my sacrificial service, and I believe this was the best preparation I could've possibly received for a lot of the harsh touring ministry demands I've faced since. His strength is perfect when our strength is gone.

Tony: Tell me about your early recordings.

Chip: I made my debut solo album 'Show Me Who I Am' in 1993. I was 15 when I made it, and it was only ever released on cassette! My Uncle Paul programmed all the tracks on his KORG 01W-FD, and I loved every second of the writing and recording process. I saved every penny I made off that tape towards paying for the album I made with my sister a few years later. The Kendall Family's 'Family Song' came out in 1996. It started off as just a song I'd written for us to sing as a family on our touring circuits. Dad had the idea to make it into a full album with some of the other performance pieces (many of them in different languages) we'd collected on our travels over the years. He already had a three-album running worship series called Out Of Zion, so it made sense to make this number four. The cover photo is a still from an appearance we made on a Canadian Christian TV channel. At the time I didn't mind it, but looking back now it's very embarrassing!

Tony: Give me thoughts and memories about the album you did with your sister Marianne. 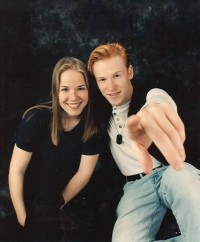 Chip: 'Back To The Drawing Board' was made in 1995. It's an album I'm still very proud of to this day, even though most of the songs seriously make me cringe. For me, it's a trophy of creative diligence, working to see ideas through to their completion. Genuinely one per cent inspiration and 99 per cent perspiration. The songs, the production, the artwork, the packaging. Since it was very much a collaborative process with some great friends in Florida, I really had to fight to keep some of the original concepts when the temptation was to go with something a little different. Then I had to live with the consequences of my own convictions! I'd saved up for so long, and I was determined to make that money work for me. I'm so thankful to God for all the lessons learned in the making of 'B2TDB'. I'm sure Marianne sings at home and at church with her husband and beautiful little baby girl, but today she's not recording or anything like that. My sister was always the smart one, going to university and earning degrees.

Tony: What were the circumstances that led you to relocate to the UK?