Chip: When I was a teenager growing up in Israel, I was very inspired and influenced by a couple of books written by Rebecca St James, 40 Days With God and 40 More Days With God. As I began to see more and more young people becoming Christians at our concerts, I genuinely felt a responsibility to do what I could by way of follow up. The whole format of that book was completely modelled on RSJ's books, but the stories and topics are all mine! It was an honour for me to give a copy to Rebecca at a gig we played together, and thank her personally for her investment into my life.

Tony: How and why did you start writing the Youth Bible Study Guides? 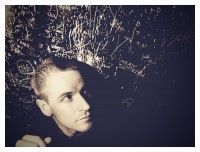 Chip: Having published The Mind Of ChipK: Enter At Your Own Risk and written a few of the stories inside the Youth Bible, I'd really hit it off with the good people at Authentic Media. They approached me about writing and compiling 12 short topical books, bridging the gap between young people and the new Youth Bible. I knew there was no way I could do it on my own, so I suggested they let me and Helen do it together. Now there's a force to be reckoned with! They agreed. We were both delighted at the prospect of helping young people to cultivate a passion for God's Word, and already the feedback from the first four has been phenomenal. We've written all 12 of the Guides and the last we heard, they'll all be available (with new covers) by the end of 2012. It's been a very long process, we've had two kids since it all started!

Tony: When did you start broadcasting with Cross Rhythms radio and why did you do this when you have such a busy schedule?

Chip: Mark Pennells (Director, Innervation) and Jon Bellamy (Cross Rhythms) both knew my heart for broadcast media, so about halfway through my career with Innervation they cooked up a weekly show for me to present on CR called theshowwithnoname as part of my role in TBWNN. We had a ton of fun making the programme, and we even won a broadcasting award! It was a great outlet for me and Straff to unleash our combined creativity on the planet, and we recorded our final episode at the final TBWNN gig.

Tony: What about the new radio series you are planning?

Chip: It's called 'MYvoice' and we're hoping it's more than just a radio series, but a full on massive youth media movement. It's a vehicle for young people to share their testimonies and make their voices heard in a very credible way. We record them sharing their story, prayer, Bible passage, rant, invitation to their club or youth group, etc. Then we edit the best bits down to about a minute, add a few radio stings and a music bed, then upload it all to Facebook where the young people themselves can do whatever they want with them! Hopefully we'll generate some great feedback and empower them to see the significance their voice carries.

Tony: Tell me about your TV work.

Chip: I'm very happy to call myself one of GodTV's most prominent youth presenters. Seriously, there are moments while we're filming when I honestly feel that everything I've ever done up until now has been preparing me for this moment. Communication, performance, engaging young people, interview technique, Scripture, having to 'pad out' spaces of empty time with relatively useful content... It all plays a huge role in presenting for GodTV! And trust me, it's not for the faint-hearted.

Tony: How many speaking engagements do you do?

Chip: At least two or three a month. Like anything else, there are seasons where I'm doing loads of them, and then it might go quiet for a bit. Very frustrating when you're trying to make more of a career out of it, but nevertheless that's the nature of the beast. I function as an evangelist, a teacher and I suppose you can add to that 'prophet'. I do my best to just simply serve the vision of whoever it is that's booked me to come and speak. A good friend of mine put it like this. He said, "Chip, the unique thing about you is that you can stick it to the world AND stick it to the Church. Not many people can do both." That was extremely encouraging for me to hear.

Tony: What churches have you been a member of since you came to the UK?

Tony: Do you carry out a function in your current church such as a worship leader or youth pastor?