Chip: No, not at the moment. However, there is a great church down in London that employs me to come and lead worship for them two Sundays a month. I love it!

Tony: Does the Chip Kendall Band have a fixed lineup? 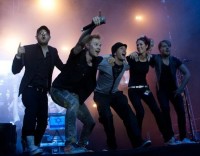 Chip: Yes. There are six of us altogether. I'm so proud of every last one of them, they're the best. And the greatest thing is that we all genuinely get on with each other, on and off stage. The Chip Kendall Band consists of: Roo Walker (guitars/vocals). Roo is a very talented singer/songwriter, musician and comedian in his own right. He's done a lot of work with Philippa Hanna, Andy Baker, Jax Walker and others. Then there's Ben Jack, also known as Galactus Jack who is the DJ/hype-man. Ben was in a group called Aorta back when TBWNN first started out. He and I are without doubt equal threats when it comes to communication and engaging with young people, and we're completely interchangeable (in my opinion) when it comes to our ministry in secondary schools. Also in the Band is Rachel Atkins (keyboards/vocals). Rachel is on the worship team at !Audacious Church, and she's in a rock-opera band with her husband Adam called Milo Cho. Then there's Scott Whitley (bass/vocals). Scott set up a successful functions band with his wife Janet called Boogie Express and now heads up the Scott Whitley Quartet. It boggles all of our minds, the things he can do on the bass. Finally, there's Matt Blackwell on drums. Matt studied at Nexus down in Coventry and was a very anointed worship leader at our old church. He's done some drumming for other bands including BeBe Vox's live show.

Tony: Is the Chip Kendall Band planning to record?

Chip: Absolutely! Not allowed to reveal any details yet, but we're very excited about some of the developments that are currently taking place. Stay posted at chipkendall.com.

Tony: The Chip Kendall Band (does that ever get abbreviated to CKB?) are due to play at Greenbelt. How different will their live show be from a typical thebandwithnoname gig?

Chip: Tony, you're more than welcome to be the first to abbreviate the name of the band! Our aim is to keep all the energy and excitement people have come to expect from a typical TBWNN experience, but also exceed that with incredible live musicianship and creativity. We'll definitely hype everyone up into a frenzy, but there will be a few slower, more melodic songs as well, which you may not have got from a TBWNN show.

Tony: Tell me about the work you are doing with Galactus Jack and how long have you been doing it?

Chip: We started Test Of FAITH: Live! in January this year, with the aim of combining faith, music and science for secondary school students. Our tag-line is "God digs science. And you don't have to be a brain surgeon to figure it out." Basically, GJ and I rock up to your school with a certified scientist (who is also a Christian), perform a few tracks, do a few interactive science experiments, show a few DVD clips from the film Test Of FAITH, and listen to the scientist's testimony. Then we field loads of questions, doing our best to show that science does NOT disprove God. The whole thing takes about 50-60 minutess, and we're already getting some incredible feedback!

Tony: Are there any other things you have in the pipeline?

Chip: Always! My heart is simply to be obedient to God, keeping in step with his Spirit, walking in love with God and people. The people at the church in London where I've been leading worship are like some kind of love warriors! The pastor, Dr Mumba, calls it a Love Revolution and preaches about how everything hangs on loving God and people. I love it. There are also a few other opportunities opening up on the worship front that I'm very excited about.

Tony: Are you still under the 'covering' of Innervation or involved with them in any way now?

Chip: I'm still doing a few big gigs with BeBe Vox (who is still very much under the Innervation umbrella) as her hype-man. But other than that, I'm a free agent! Zarc produced one track for me, "Sunshine", and I really hope we're able to do more together in the near future.

Tony: Tell me about your family life.

Chip: I have a beautiful wife and two awesome kids, a boy and a girl. Cole is three and loves Lego men and Fireman Sam. Eden is four months and loves to smile. Family time is extremely important to me and I'm determined to make all of them my biggest priorities. That's not to say that trying to balance home and work isn't a total nightmare sometimes! But by the grace of God, we're doing this life journey together and having a lot of fun along the way.

Chip: There was a preacher at !Audacious Conference this year called Rich Wilkerson Jr who said something I'll never forget. "Jesus didn't come to make bad people good, he came to make dead people alive." So many of us go through life not fully alive. But Jesus promises us that through him we can have abundant, eternal life, to the full, until it overflows. And there is so much joy and satisfaction to be discovered as we become more hungry for God. My challenge to everyone who reads this is: cultivate a passion for God and his Word, then watch as he gives you a life you never dreamed of. When we find our delight in him, he's thrilled to give us more of himself.