Reporting on the rockers from Mars Hill Church bringing something different to modern worship music, CITIZENS 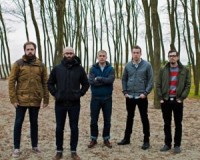 The band Citizens from Seattle, Washington based at the renowned Mars Hill Church have risen to prominence in lightning quick time. Their first self-titled, full length album, produced by Brian Eichelberger and released through the new deal that Mars Hill Records have forged with BEC/Tooth & Nail, has been met with international acclaim while their Christmas EP 'Repeat The Sounding Joy' was a fine example of how to breathe new life into well known carols. The lead singer of Citizens is Zach Bolen. The success of Citizens is only the latest in a series of surprises for Zach. The singer/songwriter never envisioned himself either as a worship leader or on the staff of a mega church.

Hailing from the north east, Bolen moved to Georgia to attend the Savannah College of Art and Design. He began volunteering at a church nearby and after graduating accepted a full time position as the student ministries worship leader. Rounding up students to play and urging them to actively worship, Bolen felt his heart for ministry completely shift. It was there that he started to cultivate passionate ideas about what worship could look like; noticing how musicians engaged and motivated their fans, Bolen was inspired to do the same. Instead of pursuing the crowd for his own sake, however, Bolen wanted to engage people through music for the glorification of God. Enter Citizens.

Bolen began working at the Mars Hill University district campus. He started reconstructing the worship teams that played there, and in the process built a band of his own. Born out of Ephesians 2:19, the name Citizens brings to mind every Christian's allegiance to God. Bolen commented, "He made us citizens, in that he has chosen to abide in us. In song, we're all led by the same spirit. We're singing as one body, one family; we're all conjoined together by Christ."

The lineup of Citizens consists of Zach Bolen (lead vocals), Nate Garvey (keys, vocals), Bryce Covert (guitar), Nathan Furtado (bass) and Adam Skatula (drums). Citizens' debut release was the EP 'Already/Not Yet'. It received a positive response. HM magazine wrote, "These guys are a hipster Christian's dream band. I could see these songs being played in contemporary churches all over the world," while NewReleaseTuesday enthused, "Citizens manage to find a workable balance between catchy pop music and uplifting praise and worship. Those looking for a fresh take on the genre would do well to give this album a listen."

The accolades continued with the release in March 2013 of the 'Citizens' album. Wrote JesusFreakHideout, "Aggressive worship music - is there really such a thing? There are plenty of the classic rock bands that produce a stereotyped worship album, but it tends to be just a watered down version of radio-friendly, safe for the whole family music. However, a group of eclectic and insistent Christians out in Seattle known as Mars Hill Music, based out of Mars Hill Church, have declared that they want to change that. . . A true standout is the first single off the album, 'Made Alive'. Musically, it has a spark pop synth with grunge-funk bass. The lyrics reflect on our depravity but celebrate on the glory of Christ's grace as Bolen gruffly sings, 'You have bought me back with the riches of your amazing grace and relentless love/I'm made alive forever, with you life forever/By your grace I'm saved.' 'Sins Of My Youth' echoes the theme of God redeeming us from our sin but in a more contemplative way, by being reminded of the Gospel."

Clearly Citizens have a bright future ahead of them. As Breathecast commented, "Musically, Citizens have created a patented type of indie rock that flutters with the electronic beat of Switchfoot, yet shimmers with the emotional intensity of Hillsong United. Above all, Bolen sings with a sense of honest gravitas; it is as if leading worship is more than just a day job. Rather, he sings with a deep-seated passion that can only come from a man who knows grace."