Dave Clemo: A song-by-song rundown of his 'Another Crazy Day' album 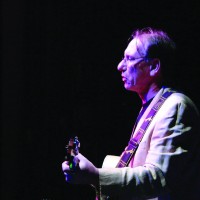 "Truckstop"
I'm a founder member of an organisation called Christians In Road Transport, otherwise known as Truckers For Jesus. I was working as a delivery driver and I used to go all over East Anglia and I realised just what these guys go through. I wrote the song in a succession of lay-bys and truck stops over a two-month period about two years ago and I've played it to truckers and they're all saying, 'This is me; it sums up what it's really about." Starting in the autumn. Truckers For Jesus are going to use it as a ministry tool to reach non-Christian truckers, and we're also going to give them UCB's Word For Today.

"Another Crazy Day"
Another song that came out in a working environment. Here in the agricultural communities of Devon and Cornwall it's a crazy situation; they pick their cabbages, put 'em on a lorry, send them all the way to Bristol to the wholesaler, then they put 'em on another lorry, and they come all the way back to the corner shops to be sold: it's a crazy world. The song was written at a time when I had to travel from Kettering to Coventry every day, and I wasn't happy. The whole working environment wasn't right and I wanted to come home again by the time I got there. I wrote the song a line at a time, just teased it out. I think the song relates to people in their predicaments. We've got an "urban nightmare" picture on the album cover of a gorilla, who should he living in a nice leafy jungle, but he's sitting in a concrete cage at a zoo with a plastic dustbin for company, surrounded by his plastic tree and the metal grilles over the doors, and totally alienated from ins natural environment. It sums us up really; there's got to be more than this urban nightmare, and both the first two songs point to Jesus, even though they don t mention his name.

"Loquidiser'
I'm not a great fan of fast food: I do like the luxury of sitting down and having a proper meal, eating real potatoes and real meat, instead of some gooey dribbly things that might've been something else once upon a time. Paul talks in the Bible about giving us spiritual milk, but after a while it's time to move on and get real food. Sometimes the Church is in danger of simplifying and watering down the Gospel. People only get the "gentle Jesus meek and mild" thing, and when they hear that, they reject it and consequently they reject the whole picture. If we're going to make progress with people, we've got to give them something that their minds can feed on, and that's what the song's about. It's a bit of a rant really.

"In The Darkness Of The Night"
We previewed this one at last years Festival. I like the music of Garth Brooks, THE biggest selling artist in the world at the moment, and this has got a little bit of that sort of country sound, not really country, but wouldn't be out of place on a country album. I got the idea for the song when I was listening to somebody speaking about the Argentinean Revival; what he was saying to me, but not using any of the words that are in the song, was that I need a faith that endures. I don't want one of these flash-in-the-pan faiths. I need comfort that lasts, when my world falls apart, as it did for me when I was made redundant. But I had Jesus to lean on, and he carried me through. You don't need nice words, you need a hope that endures, you need something you can really hang on to.

"Let Me Lean On You"
I wrote this with Jerry Arlheger, he's a really lovely guy. I want to set him to tour over here this autumn. It was another song that almost wrote itself. I was playing around with the tune and the words just started to come out, "Let me lean on you today, please don't let me fall." I more or less had it sorted out but there was something missing in the middle, and when Jerry was over last year we spent a morning just teasing out the bridge to give it a bit of a lift and to make more sense of it. But the song is basically saying, "Let me lean on you, guide my feet, though each step be small, that's OK, a walk of a thousand miles starts with just one step, and the Word is a lamp to our feet." The lamp to our feet is only supposed to light the next step; if we could see the lamp lighting a hundred yards down the road then maybe we're not walking by faith, we're trying to walk by sight.

''Walk The Talk '98"
I got increasingly frustrated with this one, because Dave Anderson, who played on the original single we brought out last year, is a great guitar player, and I couldn't play it like he did, we couldn't do it justice. So we stripped it down and made it almost country-folk-rootsy, a very unplugged sound, and it was a great deal of fun to play, and I love playing it.

"Stand Up"
A slice of Scripture. Back in the 70s I used to play in a funk-pop covers band and one of the songs we used was 'I Wish" by Stevie Wonder, and we'd do "Isn't She Lovely" and all those sort of songs, and it was that kind of groove on the bass that I was wanting to bring out. I'd recorded this song before, but it was a bit rocky, and I wanted to do something a little different. There's a Garth Brooks song. "We Shall Be Free", which has a similar groove, so we said "lets do it"; I wrote the bass line and we had a real go at something that was sort-of country, sort-of '70s funk, and hopefully very Scriptural and very relevant.

"Higher And Higher"
I wrote this with Dan Harris of The Gloryhounds (a rather good indie band from Kettering that played CR Fest 97 - TK) and they do their own version. I played it to Andy Crawley, who's done an excellent job of recording this album, and he took it away. I had nothing more to do with it, until he said, 'I've been working on this Higher and Higher' thing, have a listen and see what you think." He played it to me and it was wonderful. All I had to do was put my guitar on it and sing it and that was it. It's another testimony song, "Pick me up, set my heart on fire," that sounds like me. I was heading nowhere, "condemned to die for all my sin; you knocked the door and I let you in."

"The Kingdom Will Come"
This is a song that I wrote and played to our minister and his wife one evening, and they said, "That's good!" and I thought. Maybe it is; I think we'd better go with this one!" We've sung it for a couple of years, played it at the Festival last year, and it seems to be getting a good response. Something else I'm involved in is Christians In Midland, an organisation for all the Christians who work for the Midland Bank. We meet regularly for praise and to talk about how to be witnesses in the workplace. Last year we sang the song at their convention, and I asked four of the girls from their praise band to come to sing for me, which they very graciously agreed to do, so backing vocals on this one are courtesy of Midland Bank.

"Servant Heart"
This one grew out of last year's Festival. I know as musicians we sit up on stage, and we're up there in view, but were no more nor less servants of the Church than the guys who are the stewards, or clean out the lavatories, or sit out on the front gate half a mile away and never see the Festival at all. Or else they're in the back sorting out all the admin. We just want to serve God in every way that we can, serve God through his Church, serve God in our workplaces. I worked at the song ail through the winter, sweated on it, put it out a word at a time, until we got to the stage where we had the song. We played it in church situations, and people said. 'Can we use this song?" All I had to do then was record it! But I must admit in a sterile studio I found it very difficult to sing, so we asked if we could use one of the local churches. We went and set up the equipment in the church, and I sang it, just me and Jesus in the church, with the tape recorder looking on. It speaks to me: Day by day my prayer will be/More of you and less of me."

Bonus track and hidden track for CD buyers only!
The bonus track is a new recording of 'Walk The Talk in the original style. I've recently turned down an offer to work full-time in country music, I couldn't get any peace with it: but I know God is leading us into full-time ministry which will involve playing secular music in secular venues. But the timing was wrong. Last year I was able go into Spencer James' studio in Towcester, Spencer's the lead singer with The Searchers, he very graciously gave us two days studio time for nothing to record this song, and it's Dave Anderson's guitar playing, my singing and acoustic guitar. Spencer on back-ups, but it's got a very crisp, very bright sound. We've changed the words around to make it more "positive values" rather than out-and-out country, and it's getting good responses here and there, and who knows, someone might pick it up. As for the hidden track, to all you lucky purchasers of the CD, leave it running until you think there s nothing left, and you'll suddenly hear this strange sound of coughing and spluttering and Andy Crawley manfully trying to keep up with me as I call out the chords of "Walk The Talk" to him. The guide vocal for the song when we recorded it made me laugh so much, that I thought I'd share it with you as well. If you want to know the chords to the song, and if you want to know what really happens in a recording studio, just leave the CD to play a little bit longer!