Dear Slim, this is KJ 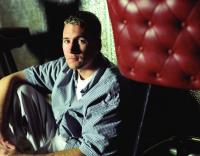 KJ-52's creatively subversive East Coast rap style has slowly but surely gained him a following and now with his latest release the rapper seems all set to go to the next level. One thing though that the rapper, born Jonah Sorrentino, is keen to sort out once and for all is his stage moniker. His early press release declared that KJ was an acronym for "knowledge is justification" while the numbers five and two added up to seven symbolising completion. Numerology aside, the rapper has finally addressed confusion about his name with his new album. He told U Magazine, "It's called 'It's Pronounced Five Two' and it is a way for me to answer one of the most frequent questions I get asked. But it's really about saying, 'Hey, this is me. Understand me, please. This is who I really am. I got a little experimental on this record. I am singing, which I've never done on a recording before. Todd (producer) encouraged me to sing on a few tracks and I think if God is developing a talent in me, I would be wrong to bury it and not use it."

KJ-52/Jonah grew up in Ybor City, the ghetto area of Tampa, Florida. Throughout the '90s he worked steadily, eventually winning the South Western Florida MPM Spit And Spin Battle contest as well as playing live shows with such mainstream big names as Wu Tang Clan, A Tribe Called Quest and De La Soul. In 2000 he was signed to Essential Records and the subsequent album, '7th Avenue', produced by Todd Collins, gained considerable interest. It was his album debut for Uprok in 2002 though that shone the spotlight on the rapper's particular gifts. A collaboration with numerous other Christian musicians, the album was appropriately called 'Collaborations' and featured contributions from such diverse acts as rock groups Pillar and Thousand Foot Krutch and hip-hop acts John Reuben and Mars Ill. But it was KJ-52's "Dear Slim", a song directed towards superstar Eminem, which, for a moment at least, brought KJ to the attention of MTV. The rapper spoke about the experience: "I was really disappointed that they only played the first verse because it can be totally misconstrued if you don't hear it with the rest of the song. The VJ called me a 'hater' and said I was just trying to make a name for myself, which was totally untrue. But I got about 80 emails within a couple of hours after the show aired and only four or five of those weren't totally supportive. I heard some great things from kids who weren't even Christians, so it made me think, 'Wow! People can actually think for themselves.'"

In fact, 'It's Pronounced Five Two' contains an update on the open-letter-to-Eminem concept. Why, he was asked, has he recorded "Dear Slim Part 2"? "I didn't realise the first song would touch a nerve in so many people. It generated a lot of questions - people wanted to know what Eminem's response was or what my motivation was. So I decided to write a follow up that would explain it all. I felt like if I didn't properly address everything, I'd spend the rest of my career trying to explain myself. I was less confrontational and more about love on this version because I didn't want people to misconstrue what I was trying to say. I personally think this version turned out even better than the first one."

One of the hardest hitting songs on KJ-52's new album is "Don't Go", a track which expresses the pain of a child whose parents are going through a divorce. It comes out of KJ's personal experience. "My parents separated when I was six and then divorced three years later when I was nine. I wanted to write a song about it for so long but every time I tried to tackle this issue it never sounded the way I wanted it to. But a lot of kids write to me who are going through some of the exact same things I went through and are feeling the pain you feel when your parents split. I really wanted to address the topic, but I didn't want to say, 'Oh, you're going to be okay.' It wasn't easy - it was tough. And I'm so far over it now. So I basically said, 'I've been through what you've been through; but God has put my life back together and he can do the same thing for you." 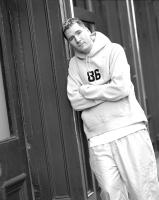 One of the things which sets KJ-52 apart from the Christian hip-hop crowd is his comic interludes on his albums. He's keen to inject some humour alongside the serious spiritual proclamation. "I think a lot of rappers either take themselves too seriously, or their pride won't let them be silly sometimes. The stupid 'Mullet Pride' song I wrote for the last album - people riot if I don't do that song at my shows. I just try to find a balance that's not too serious or too silly. I'm not trying to cater to one group or another. I just want to look at my audience and figure out how to reach them in the best possible way. That's where my attitude has shifted - to the point where I'm going, 'I've got to go with what my audience wants.'"

To answer where he got the KJ52 name. KJ stands for King James which is a type of bible translation. 5 2 represents John 6:9 where the boy bought to JESUS 5 loaves of bread and two small fish.

I heart KJ-52. he really encoursges me to keep going strong in my faith. i havent ever heard Dear Slim part1 but i loooove part 2...keep rapping man your awesum!

My favorite song is cry no more i really can relate to that song i was sexually abused when i was 6 and i was so ashamed i never wanted to speak of it, and i didnt until i was sixteen.

Eminem answers KJ in his song "Careful What You Wish For" by saying:
"I got a letter from a fan that says
he's been prayin for me
every day and thats been weighin on my mind heavy.
Cuz I don't open every letter I get.
But somethin told me to go ahead and open it.
But why would some pray for when they don't know you."
~B~L~A~H~B~L~A~H~B~L~A~H~~~~
"I've already told you at least
a thousand times in these rhymes
that I appreciate the prayer,
but I've already got God on my side.

do you help out with any charities

I'm sure that Slim has probably listened to the song and he might not admit it but you know he thinks about the words in "Dear Slim". You planted the seed man, now God will do His part!

I love KJ's music ROCK OUT FOR CHRIST YO!

hi my name is inny
kj 52 you are doing a really god job .im a christian and i want to be like you do rap for good .
im am eminem's biggest fan ,well let say i was , see there is no doubt eminem is the greatest rapper of all the times .but he is going to far he is a very bad influence .especially for the kids , well you cant just sell the soul for money

Awesome, I love KJ's song, "Dear Slim" and Part 2 of it. I think they're both awesome, and I hope Slim understands it and begins being a good role model.