DON FRANCISCO is back in Britain this month. Before he climbed on a plane, he spoke to Dave Massey. 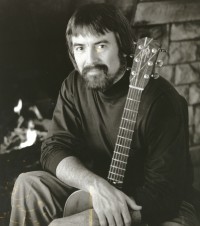 A faithful visitor to these shores, Don Francisco has built up a phenomenal following among British churchgoers. His British concerts are usually sold out while his albums sell in quantities large enough to put a gleam in the eye of any Christian bookstore manager. Yet Don is far from the stereotype of the US glitzy American gospel star. His simple, country tinged songs with their powerful Bible narrative lyrics visibly effect audiences while his latest album, 'Vision Of The Valley', considered by one and all his best for years, has a prophetic edge mere merchandisers of cleaned-up entertainment cannot match. I spoke to Don about his music and ministry.

Can you tell me a bit about your background? Which part of the States are you from?

"I was born and raised in Louisville, Kentucky. My Dad was a professor of Old Testament and Hebrew at a seminary. He was a very well known preacher in the denomination. - I'm Baptist. I grew up with a very religious background. That was the best you could say for it."

Did you rebel against that?

"In any child's upbringing If there's an imbalance between discipline and love to the extent that discipline is much stronger then the result is rebellion in almost every case."

So your dad was very strict was he?

"Both parents were very strict and the whole situation was quite performance orientated. So it had some quite negative results even by the time I was about ten years old. I was sneaking out behind the garage to smoke cigarettes with the guys, stealing things from stores and stuff like that. And it wasn't because we needed anything, it was just acting out the rebellion and the anger that I was feeling. Of course this is all looking back, as a child I had no idea why I was doing the things I was doing. But also from the time I was about six years old I took piano lessons till I was 12 - well, I was forced to take those, I hated the entire experience mainly because of a very bad teacher. She was only conscious of making her students learn what she thought they ought to learn rather than helping them enjoy the music.

Did it put you off music?

"Yeah - well it put me off piano. And then when I was fourteen I got my first guitar - actually I won the money for it in a Blackjack game -- that's what I got into when I was supposed to be at Sunday School. One of the kids that was in the game with me had actually stolen money from the Sunday School offering. This is not the way you would imagine for a gospel artist to get his start, but actually it makes sense then you think about it because God owned that guitar from the 'get to go'. Not only was it paid for with his money, I got the money on his time, so it all worked out.

What did your parents think of pop music?

"They didn't think much of it, in fact they didn't think much of me playing. In fact my first real guitar (the one I bought out of what I'd won at the card game was really a piece of junk -- for 20 bucks you can't really buy much, even back then) my dad bought me as a bribe because he got me to promise that if he bought that guitar I'd quit smoking cigarettes."

"I was addicted, I couldn't quit. I tried, I tried for a couple of days but it didn't work. But they never thought that I would make anything out of it. Their attitude basically was music. - bah - get a job! And I really did try to live up to their expectations --I went to college, went to 4/5 different colleges, as many different majors as colleges I went to. All the different things I tried to do to fit in with my parents and their whole world's expectations just didn't work. I tried working in all these straight jobs that you had to wear 3 piece suits and wing tip shoes. I tried all this stuff and I just didn't fit in I was miserable trying to do it. Finally when I was 24 I just made up my mind that it was music -- whether I starve or succeed that was what I was going to do even though at that point I had no real training. When I grew up there really wasn't the opportunity for it, not like there is now. Especially if you wanted to play rock 'n' roll, there wasn't any school you could go to. So for the next four years I worked rather hard at it, getting a group together and I started writing songs seriously."

What was your first group called?