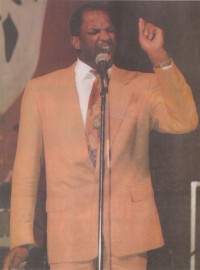 You may recall the name Donnie McClurkin from the Ron Winans Family Choir albums, or you might have heard about his own choir, the New York Restoration Choir - the gospel choir for people who don't go to church which isn't called Sounds Of Blackness. If not, worry not; with the release of his" cracker of a solo debut, Donnie should soon be as well known as his two mentors - Andrae Crouch and Marvin Winans. I caught up with him during a recent brief spell in London to promote his debut offering, during which he gave me 'The Donnie McClurkin Story'. Brace yourself.

The fact that his home town is called Amityville is probably purely coincidental, but the story of Donnie's childhood is rather horrifying. Born in 1959 to a minister mother and deacon father (in two separate churches in two different denominations), Donnie had to learn to look out for himself earlier than most kids.

"We grew up in a dysfunctional home," Donnie recalled. "My mother left the church and became addicted to drugs -including prescription drugs - selling drugs out of our home and my father was an alcoholic all the years I was born. They would fight; they would have fistfights, fights with knives and forks and boiling water, and the kids were always caught in the middle. It ended up that I was the only one saved, going to church and living for Jesus, for 12 years.

"I was seven years old when I was sexually molested by my uncle and 13 when his son perpetrated the same thing. Life wasn't easy, but having Jesus made it a lot easier to cope with. Thank God, I wasn't affected by the street life; it never appealed to me, church was my only life - it was all that I wanted. Consequently that kept me sane; that kept me from running wild and doing all kinds of crazy and damnable things. And it ultimately got my family back on track, after 12 years of praying and holding on to God's promise.

"Now every one of them is back in the church and living for Jesus. No addictions, no withdrawal symptoms, no rehab centres - God worked that wonder. My sisters are singing, and they have a project coming out in '97 on the label Kirk Franklin's on -GospoCentric. Everything's going pretty well now."

One person that was a tower of strength during that troubled period in Donnie's life was Andrae Crouch, whom he met through his aunt, Bea Carr - a singer in Andrae's old band, the Disciples.

"Andrae prayed with me when I was 11, when he came to our church and gave his testimony of how God saved him at nine, and I'd got saved at nine too, so there was that kindred bond," Donnie explained. "He's been a mentor to me throughout the years; he's given me advice, taken me under his wing and shared himself totally unselfishly - he has not held back anything at all. This started at the age of 14 when he would send me postcards from wherever he was around the world and give me Scriptures to read. He never fostered the entertainment value of (gospel music); he always promoted the spiritual aspect of it. That's how I started working with Andrae."

Three years after his first meeting with Andrae Crouch, Donnie was playing the piano for his church youth choir. Later on, he began to sing and formed the McClurkin Singers with his sisters. In 1982 he met Marvin Winans.

"I met him when he came to do a concert with the family "in New York, way before anybody knew the family could sing," Donnie said. "We became like Jonathan and David; immediate friends. God told me I was going to be working with him and he told him the same thing. We almost said it simultaneously -I said, 'God told me...,' and he said, 'God told me! I don't have anything to offer you; people think I walk around with contracts in my pocket, but I've got nothing to offer you -I don't even know your name! I don't know when or where, but God said we're going to work together.' That was in '82.

"We'd see each other only once a year; I'd give a concert in New York and he'd show up and in '87 I ran into him and we started doing a gospel play together, called Don't Get God Started. We travelled around the American nation together and when we left there, he went back to Detroit to start the church (Perfecting Church) and I went with him. We've been together since then. He's my pastor and I assist him in the ministry."

In 1990, not long after joining Marvin's congregation, Donnie suffered another setback when he was diagnosed with leukaemia. "I was swollen up and bleeding internally," Donnie recalled, "and through a series of tests and bone marrow testings they found leukaemia. They wanted to start chemotherapy right away and I told the doctor, 'Give me 30 days'.

"I went and told my pastor Marvin, he walked with me down the hall and hit me in the chest and said, 'Not so,' and went into the office and said no more. I believed that God was going to heal me, like I told the doctor. I went to California, where Andrae Crouch's dad's church was, and we prayed and he said, 'Not so'. I came back to the hospital 30 days later and God had healed me. The doctor and nurses wound up coming to church! The two nurses gave their hearts to Jesus and belong to the church to this day!"

The previous September, after years of avoiding choir work because, "I hated some of the lifestyles I saw in so many choir members," Donnie formed the New York Restoration Choir. "It was something that the Lord told me to do even before there was a choir. There was no choir, or choir members, or songs! God told me to go to Savoy Records and tell Milton Biggham (MD of the label) that I had a choir. I felt that was crazy because I didn't have a choir at the time, but I went and told Milton, 'I've got a choir; you've got to hear it, you've got to record this choir.' He just said, 'Well, I can't sign them without hearing them.'

"I flew back to New York, went to my mother's house and called up 12 friends. I called them over to my mother's house then I sat at the piano and wrote a couple of songs - 'Speak To My Heart' was one of them. We put them all down on tape and I brought them to Milton the next day. He said, 'I've got to have that choir!' and I just laughed. That's how NYRC started.

"We made up our minds when we started that we would not be a typical choir, going from church to church singing two selections at a concert. We would be a specialty choir that was geared for ministry and ministry alone - going from the streets to the prisons and special events. So consequently we sang for President Bush, for President Clinton, for Natalie Cole on her Christmas special, we do the New York Nicks basketball games - we do a lot of higher profile things, but very little as far as quantity of work."

One of Danny's most memorable engagements was singing on the hugely popular Arsenio Hall TV programme -which brought a mixed reaction from fellow believers. "'Criticized' is a nice way of putting what I got from Christians," said Danny. "I got ravaged because they felt I shouldn't have been on the Arsenio Hall Show, even though it was a spiritual song we sang. They were upset that I was singing with Ice-T, Big Daddy Kane, Melle Mel, Tevin Campbell, Siedah Garrett and El DeBarge. It was a song for Quincy Jones - from the 'Listen Up' documentary.

"They didn't think I should have done that and so they got a little miffed. But it led to witnessing and praying for Big Daddy Kane and laying hands on and praying for El DeBarge - who is a very good friend now - so it doesn't matter what the people think, as long as I know the will of God and don't sing anything that would compromise the message of Jesus Christ."

Danny continued, "We've been geared to this type of elite society, social club-type environment in the Church, where we have our own vernacular, our own fellowships - which are inclusive of only our own denominations - and anything else is considered to be somewhat erroneous. So if you want Jesus, you've got to come in and act like us, think like us. Breathe, dress, talk like us, you know; and if you don't you're held suspect, in question. That's where that started; we believed that we were the only ones that had it right. I understand that for the most part - but then we decided that if 'they' wanted Jesus, they had to come to us. And that's where the problem came in, when God told us directly to go out to them. So that's my goal now; to go out and do what God has already commanded us to do."

On the day I met Donnie, his fellow countrymen were busy electing a new government and as he'd mentioned singing for the last two presidents, it prompted me to ask, wasn't he missing out by being in England on Polling Day? "Not at all," came the reply. "I voted before I left, by absentee ballot and by now the world probably knows that Bill Clinton is President of the United Stated of America once again, thank God. If you haven't already guessed, I'm a Democrat."

And there I was, thinking that 'American Christian Democrat voter' was a contradiction in terms. But that's Donnie McClurkin for you; a man full of surprises and overflowing with joy, always on the lookout for someone to share it with. At the moment, his biggest worry is whether or not his beloved Nicks will bounce back to former glory on the basketball court. "It's been years since they won anything, but your allegiance dies hard," Donnie said. "Hopefully, they'll win in 1997, with our assistance, prayer and singing. Patrick Ewing all the way!"