Donnie McClurkin brings 'Live In London' back to London 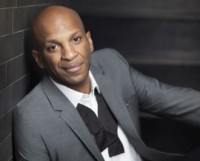 WORLD-RENOWNED gospel singer and minister Donnie McClurkin is to celebrate the 20th anniversary of his 'Live In London' album with a pair of shows in London on the 18th and 19th of October at Gateway House, Woolwich. With support from London-based choir Sounds Of New Wine, McClurkin will be performing classic hits as well as never-before-heard songs during the two dates.