Today, praise and worship and contemporary R&B have merged to produce an exciting hybrid. Mike Rimmer spoke to one of the pioneers of this new development, FRED HAMMOND. 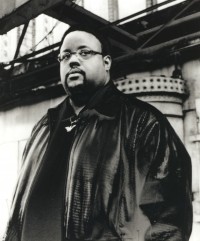 It's not every day that you live to witness a major paradigm shift in gospel music but that's what's been happening in the last few years through the music of one Fred Hammond. Let's backtrack a moment. The last time this happened, Andrae Crouch was fusing gospel with the contemporary R&B sounds of the 70s, predominantly Earth Wind & Fire-style funk. He blazed a path that allowed a host of people from Detroit to take it to a new place. The many members of the Winans family and a band called Commissioned typified the energy of this new hybrid and contemporary gospel came of age.

Over a decade later, gentle man-mountain Fred Hammond, founder member of Commissioned, brilliant bass player, production genius and all round seriously anointed talent, is taking it all to another level. In the brief years since Fred left Commissioned, he has pioneered a brand new style of gospel music successfully mixing traditional gospel choir sounds with a contemporary R&B urban flavour but throwing into the mix a strong element of praise and worship. Thus Radical For Christ's unique urban gospel praise works whether it is featured on an album for Integrity or they are funking it up with their latest release 'Pages Of Life1. It works because whatever the context, Hammond and team minister and man, is it powerful!

The success of RFC's last album 'Spirit Of David' turned many heads but the new one is destined to break everything wide open. Hammond is a busy man and it's taken months to even get the opportunity to chat on the telephone! I wondered out loud whether he'd been surprised by the success of 'Spirit Of David' and he responded, "Well no, I thought it was an extraordinary album and I was praying for it to sell or do at least what it did 'cos that was just the way I wanted it to happen. At the same time I have done a lot of albums I thought were really good but 'Spirit Of David' did jump out there as something different. I really loved it."

He wasn't alone! Critically and artistically acclaimed, many wondered how Hammond was going to top it but top it he has! The new double album 'Pages Of Life' has come as a surprise because of its studio/live CD format. I wondered why he had chosen to make it a double. His answer surprised me "That was the record company's idea. We had done a video and the owner of the company said they wanted to put the video out before the record came out. But when they heard the studio stuff and loved it and then heard the live stuff and loved that they said, 'Let's just put them both out there."'

So we, the gospel music loving public, get the best of both worlds - a highly creative studio- based Hammond pushing back the barriers, and a highly anointed ministering Hammond testifying and witnessing and seeing God move! One of the highlights of the live set is the song "No Weapon", the live performance is electrifying and Fred commented, "People usually wait for that song. That's such an encouraging song. So many people are going through battles and scrapes and scars, people's families are falling apart. That song is just a reminder that God will do what he said he will do. It encourages us to remember that God is in control so therefore nothing the Devil has for me is going to work. God is there saying 'I will lift you up when they want to bring you down.'"

The live recording also shows how Hammond and RFC mix in quite a bit of testimony with their songs and listening, you realise how many members of the group have faced some quite sharp and dangerous difficulties. Fred recognises the importance of keeping it real when he responded, "You've got to keep some real life stuff going on 'cos people don't like it when you're singing about stuff you don't know and RFC have got a lot of stories to tell themselves." It's a theme close to Fred's heart. "I just want the people to know I'm a regular guy," he explained. "Don't put me on a pedestal. When people feel as though I'm touchable they will take what I've got to say because I've been through that too."

Creatively Hammond has won a lot of applause but his life has more than simply a creative aspect. So much of what he does is ministry and I wondered whether he had any reflections on his role as a minister. He responded, "As a minister I like to be regular and real. I have a lot of things in my life that will help me help other people. Minister just means servant, meeting the needs of people and I can meet them with words. I just sing the words. I'm not a preacher but I do minister in the fact I can write a song and then minister about that song."

So had he ever considered becoming a preacher since a lot of musicians go in that direction? His answer was both honest and surprising: "Yeah, I've thought about it a lot but I don't think that's me. I think God wants me to minister to the same people in a different way and not always just singing but having a real word for somebody and ministering to them. They can see your lifestyle on stage and offstage and think, 'Wow, that's a good guy.'"

Hammond has established Face To Face Productions and explained how that underpins a lot of his activities. "Face To Face is just a production house, a ministry house that brings in young people from all walks of life to come and learn how to praise God and dance with God. It's a four-studio complex where we can record, cut and mix. It's like we're our whole music publishers. We publish the word of God in the earth."

Now that he is running Face To Face I teased him that he must have become something of an executive with a cigar and big desk. Fred chuckled and countered my suggestion saying, "No cigar but I've got a big desk!"

Whether he is enjoying the luxury of his huge desk or not, God is using Fred Hammond to train the gospel singers who will take urban gospel praise into the next century. Radical For Christ will take the music and ministry to the next level and Fred shared about them: "I just wanted some young people who would take the enthusiasm that I had for praise and worship and could go to another level. I felt that praise and worship music hadn't reached its potential in urban settings and I wanted to use the beats and the music but not make it so artist driven. In Commissioned we were always pointing to God but here we wanted to do things more God-centred, talking about how awesome God is and just give a great accolade of praise to God. I wanted to do it with a beat and some young folk who love God as much as I do."

I wondered whether when Fred thinks about his life he ever pinches himself? "1 do think. 'Wow, God! I can't believe you got me in this position," he replied. "I do a lot of reflecting about how God has blessed me and my family. If you could ever see my situation and where I'm from you wouldn't pick me to be where I am, but God did it. He knows where I'm a mess and where I'm a wreck and once again he's God and that's just the way it is and he orders steps. He ordered mine."

It is that kind of intimacy, that reflection of the relentless grace of God which pervades Hammond's life and music which permeates through every song and every groove on the new album. When I first heard the rough mix on my car stereo, there was one song which touched me so much I was reduced to tears. It had a similar affect on Admiral Cummings when I locked him in a studio in UCB and forced him to listen to it! "Please Do Not Pass Me By" is about Jesus passing by the blind Bartimaus and it has become one of my favourites to play on my radio programmes because it ministers so powerfully.

Hammond agreed with me. "That song means a lot to me," he commented. "When I was growing up I was trying to be the man of my household and a lot of people overlooked me. They thought I could never be good enough because of my past, who my family was. Even now that song means so much to me. I've met a lot of hurting people who feel like God is not accessible. God is just waiting for you to call on his name and he is waiting to come to you."