Gary Chapman: The US CCM songwriter returns after a long absence

The first album for six years by GARY CHAPMAN has been acknowledged by numerous critics as one of the finest albums of the year. Jan Willem Vink reports. 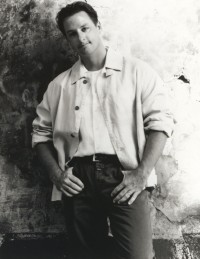 Once the songwriter who provided the teenage newcomer Amy Grant with the hits, talented singer/songwriter Gary Chapman married the girl he wrote the CCM songs for. But theirs was not the sunshiney-happy relationship of PR myth. Pressures began to exert themselves on Gary as his own star dipped in the horizon and his wife soared on to ever increasing superstardom. Relegated to the role of Mr Amy Grant, Gary went looking for the edge, resorting to marijuana and cocaine use. Then with his marriage in jeopardy, and with the aid of a close circle of friends, Gary fell into the arms of a healing God and began the climb back. Today in 1994 Gary has at last found his own creative voice. 'The Light Inside' has been acclaimed as a brilliant and mature album. Already Gary is busy recording a follow up.

Gary Chapman was born in 1957 in Waurika, Oklahoma, United States. "Waurika is an Indian sounding name, because it is an Indian name," jokes Gary. "I spent the first five and a half years of my life in Oklahoma then moved to DeLeon, Texas. When I was 17 I moved to Nashville. I grew up in a preacher's home, my dad was a minister and so I accepted Christ at an early age."

Music was always a big part of Gary's life. "I think my early musical influences were mostly country music. There was no rock radio where I grew up. It was in the middle, just deep in the heart of Texas. If you stick your finger in the middle of a map of Texas you'd smash my hometown. We were over a hundred miles from any metropolitan area. Back in the late 60s, early 70s, country music was all that was out there, that and records that my brother and sister would buy and church music. I started singing in church when I was three, and playing a musical instrument consistently, every service, when I was 10. That's really all I did. And I had a band since I can remember and always a little group of guys, pounding away some chords and screaming away some meaningless lyric. And that's kind of all I did.

"I had piano lessons from age seven to age 10 and I hated it, really hated it," states Chapman. "I wish I had liked it because I enjoy piano now. But piano lessons drove me to guitar, so I'm thankful. Chet Atkins taught me how to play guitar when I was about 10. I bought all the records and put my finger on the turntable to slow 'em down so I could play what he was playing."

Chapman moved to Nashville when he was 17, where he worked for the Downings and the Rambos for a year and a half. Gary was impressed with the songwriting talents of Dottie Rambo, which ignited the songwriting fire in him. Gary then decided that songwriting was what he wanted and quit the Rambos. Says Gary, "I really felt like if I didn't stop playing on the road and I didn't commit to survive as a songwriter, then I would always wonder if I could have. So I quit and pretty much starved for a year and a half. Until I got a song cut. The first song that was cut, of any consequence, was a song called 'My Father's Eyes'. That's how I met my wife."

Amy and Gary met for the first time at the record release party of 'Father's Eyes', Amy's second album, named after Gary's song. "She was dating another guy," comments Gary. "I pretty much fell in love instantly - she didn't. That didn't bother me that much. I was fairly cocky at the time. I actually went up to her and her boyfriend and asked her out. And she told me that I should call her later and so I did."

Gary had to wait for another six months to see Amy again. In the meantime he sent Amy tapes and notes like, "Here's your next hit song." Remarks Amy, "I thought he was joking and I'd write back the song was weak. He lost all respect for my musical opinions."

But Gary continued being involved in Amy's career. An emergency phone call from Amy's management in the summer of 1979 resulted in five songwriting credits on 'Never Alone'. Says Gary, "The management said, 'We're supposed to go in and start cutting vocals tomorrow and on five of the songs we don't have any lyrics.' I went to the mall and had this t-shirt made that said 'Chapman Song Repair'. I came back to them an hour and a half later with the first song and my t-shirt on. The whole thing really locked me into Amy's organisation."

Gary, now an established songwriter and no longer living on crackers, got a record deal of his own. In the early 80s he recorded 'Sincerly Yours' and 'Happening', a live album featuring producers Eddie DeGarmo and Dana Key, bassist Mike Brignardello, keyboard player Michael W Smith and wife-to-be Amy Grant for a duet, named "Always".

"Amy's career and mine were both sort of taking off, but her part was taking off quicker than mine. And we didn't want to be apart. So I didn't record for quite a while. I just travelled with her, supported what she did and helped with the live thing and helped with her records. Then I did another record in 1987 called 'Everyday Man'. It had been a good time to put out a record, after six years or so."

Other elements might have halted Chapman's career as well. Says Chapman, "When I left home I went nuts. I assume I needed to find the edge or something. I smoked marijuana and did a considerable amount of cocaine for quite a few years. And it's not something that I'm proud of. It's been great to see how God can take the mistakes that I made and sanctify them and actually use them.

"I just reached a point where it was obvious to me that I was going to lose my marriage and everything that I really cared about in life if I didn't stop. And so I did stop and I asked God to help me remain stopped. I got some good counselling. I've got a really good, close circle of friends and family that I'm accountable to. It's been since September 1986, so that's a pretty good long stretch. I still take it a day at a time. I'm actually not even tempted anymore. It's pretty wonderful. I didn't think I would get to a place where I didn't at least think about it. And now I don't think about it anymore, unless, of course, I get asked the question in an interview..."

Through wise counsel and the healing power of Christ Gary and Amy's marriage is now stronger than it's ever been. Amy told a US magazine in May, "We've had some wild, rocky times but if I had it to do all over again, there's nobody I've ever met that I would choose instead of him."

your music is great.

Thanks for keeping this interview up. It was a wonderful window into the artist's life and lives...

Just curious of what you think of him now, after a couple more marriages, Don?

Let those without sin cast the first stone

I really enjoyed reading this article, especially how Gary tells about his vision of writing one of the best spiritual songs ever, "Sweet JESUS". I love that song immensely! "The Light Inside" is a great cd to have;
"Sweet Glow of Mercy" is a top favorite song! By the song titles, one gets the impression that life for Gary at the time was sweet. Well, he had a fantastic wife, and 3 kids! Kudos to a great songwriter! I am glad that I got to see him in concert with Amy.