Inspiration Worship: A battle against terminal cancer leads to a powerful album 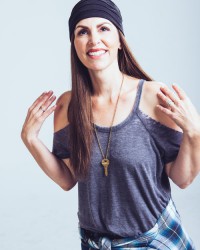 The story behind the debut full-length album release 'Powerful' by Inspiration Worship is truly extraordinary. Less than a year ago, Linda Doane, who for all intents and purposes is Inspiration Worship, was given two to 12 months to live as she battled Stage 4 Non-Hodgkin's Lymphoma. Now in full remission following her third bout with cancer, Linda's Inspiration Worship album has been given a global release by Radiate Music. Said Linda, "I don't think a lot of Christians walk around feeling powerful. There's power available to believers in Jesus, and that's the overall message I want people to come away with from this record."

From her Michigan home, Linda spoke to Cross Rhythms. She and her husband Tom had been leading worship in their local church for a few years when, in December 2011, the couple were hit by huge difficulties. She explained, "I had a hard time breathing and I wasn't really doing anything about it. I thought it was stress. We had just put our daughter, who was 15 at the time, into her first long-term treatment for anorexia. She was down to 85 pounds. As a parent, you're not really focused on yourself. About a week later I said I don't think this is normal. Maybe it's pneumonia; maybe I'm just worn out. I went to the doctor and got immediately transferred to a hospital and started my first of seven lung caps in six weeks because the fluid was building up. I was eventually diagnosed with Stage 4 Non-Hodgkin's Lymphoma. That was the first of three battles. It relapsed in 2014 and exactly a year ago I got the news that not only was it back for a third time but it had transformed to a more aggressive form and I had two to 12 months to live. It's been an uphill battle, for sure."

Linda admitted that the second time she had been diagnosed with cancer she had something of a crisis of faith, but the third time the pronouncement from her Jewish doctor brought a rise of faith in Linda. She said, "I thought here's my big moment; I'm going to tell him about the power of Christ and healing. I didn't get emotional or anything, I just mumbled my words and said 'Faith.' That was it. And my doctor just nodded his head and said okay, all right then. And he walked out. We had to work out where do we go from here. My husband, God bless him, is an incredible researcher. He got right on the computer and found some clinical trials and our doctor was in full support of it. I had to go and live in Houston, Texas for six weeks for something called CAR T-cell therapy, it's an immunotherapy and it's really been transforming people's lives. I got accepted into the clinical trial and even though it was very difficult physically, I just had a sense of God: this is a great moment to walk out what I've been writing in my music which is that we have this powerful prayer life and this powerful existence through Christ that anything can be overcome in him and through him. So I guess I thought, okay we share in the Lord's sufferings, right? This cancer is everywhere; it's not just one country, it's not just one type of people, it's not an age group, it's not a gender. It touches everybody's lives so all the more reason God can use it to connect with people. We overcome by the blood of the Lamb and the word of our testimony. And cancer is a testimony that really hits people in their heart because we all know somebody. I just pray that it doesn't get wasted; I know that nothing is wasted, in Christ; nothing that we go through will be wasted."

All of the songs on 'Powerful' deal in different ways with the painful situations being faced by Linda. She said, "When I was going through chemo, I was reading my Bible and I read something that touched me like 'sceptre' and 'crown'. I was reading about the governor's soldiers and how they were mocking him with a crown of thorns and beating him with a staff they put in his hands. It's not necessarily a cancer song but it was written during that time period. All of these songs remind me of this seven-year journey that I've been on. It was all created during this journey. But of course 'I Can't Fix You', that song in particular, as far as emotional, I wrote that about my daughter's struggle with anorexia but it also very much talks about how Tom felt when I was going through cancer and he was wishing he could fix it or take it for me. But really that song is written for anybody who's suffering with anything that needs God's healing touch. So that song for sure, from an emotional point of view, is very much about cancer, disease, anorexia, struggle, more than the others."

Despite the grievous state of Linda's health, she felt a deep need to record some of the songs that she was writing. So she and Tom released a five-song EP, 'Whose', in 2015. Explained Linda, "The song 'Whose' in particular was right after the second time I went through chemotherapy. Tom and I had been leading worship regularly at our church but that was when we kind of looked at each other and said what are we waiting for? You've had this desire, you're writing songs and feel here's a greater call and what are we waiting for? Especially after the relapse and you have to deal with that crisis of faith. Okay, sometimes life does not go in the way that you want it to so you literally do not want to waste a breath. In June 2015, the first line of the song 'Whose' ran through my head and I sat down and wrote the whole song and I felt like the Lord was saying if I'm the answer to this song 'Whose heart do you yearn for?' all of that; if I'm the answer to that song then I'm saying yes to Inspiration Worship. I'm giving you the go. In faith we recorded that EP; we did it all locally and it began us on this path to make this no longer a dream but the reality of our life."

In 2016, the couple had recorded six new songs. Remembered Linda, "I said to Tom, I don't think it's done; there's more to it. We're rushing, we're trying to get ahead; we need to slow down and we know that we can't do this just he and I together. So I started sending emails and packages to record labels and radio promoters, whatever I could to the sound of crickets! I had sent one Facebook message, which has not left me. I'm not great at social media. I sent one Facebook message to a producer in Franklin, Tennessee, named Ian Eskelin and by the grace of God he called us back. It was October 2016. We talked for a little bit and he said it's great that you want to write for the Lord and glorify him; yes, it's a tough business. I said if Tom and I can get out to Tennessee, it's about a nine-hour drive, would you meet with us? And he said sure. I think his intention in that moment was just to pour into people who loved the Lord like he does; to share his knowledge but I don't think he expected a relationship to spring from it. In that meeting he agreed to record one song with us, a song called 'Heaven Reigns'. Through this month or two of time, his family started dealing with cancer and he and Tom connected as husbands supporting their wives through cancer. Our friendship just bloomed and a mutual respect for each other and a desire to keep doing music and I think it was really fun for him because we didn't have a major label, we could have it sound however we wanted. We didn't answer to anybody, except God. We were going to release at the end of 2017 and the terminal diagnosis came, which I always capitalise the 'no' in diagnosis and say God put the NO in diagnosis. We recorded the songs 'Take Me' and 'Roar' on the way home from the clinical trials, with a baldhead, you know, the whole deal. We drove from Texas to Tennessee, recorded the two songs and then drove home."

The media response to 'Powerful' has been substantial. Inspired by her story, Christian Music Weekly (CMW) ran a page-one cover story while national radio shows and podcasts like Soul2Soul Radio, Life With Purpose Radio, Campus Crusade For Christ's Making Your Life Count, The Song Revolution Podcast have chronicled Linda's journey of faith. The Christian Beat website gave a particularly enthusiastic review to the album, writing, "Linda sings about devotion to God on the corporate friendly 'All I Am' and album opener 'Take Me', the authority of believers on 'Heaven Reigns', and the need for the Church to 'Rise Up' in a song featuring guest artist Adam Klutinoty of the band About A Mile."

In all the publicity and profile that the media have given 'Powerful', Linda is adamant that prayer has been a key factor in bringing the songs of 'Powerful' and the story behind them to people's attention. She said, "We've had so many people praying. One of our best friends pastors a church called The River Of God and multiple times I went to them for prayer and strength. It's so important to have a community praying with you. But I also know, by the grace of God, there are people I don't know praying for me too. I'll probably never know the full scope of it till I go to Heaven someday. But just to know that the body of Christ comes together for people, whether they are in your life personally or not, it's probably one of the most reassuring, powerful things I've ever experienced."

Such an inspiring testimony. God bless you, Linda!