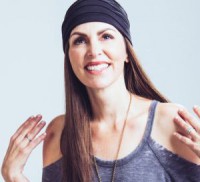 MICHIGAN-based Inspiration Worship, featuring songwriter, vocalist and cancer survivor Linda Doane, are to release their debut album 'Powerful' on 31st August. Less than a year ago Linda was diagnosed with Stage IV Non-Hodgkin's Lymphoma, which caused her difficulty in breathing. It was predicted she had two to 12 months to live. She is now in remission. Speaking of the album Linda said, "There's power available to believers in Jesus, and that's the overall message I want people to come away from with this record."