Jason Gray: The songsmith talks about Where The Light Gets In 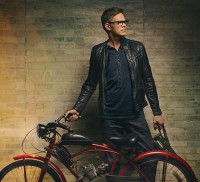 The singer songwriter from Minneapolis, Jason Gray, has down the years become popular with Cross Rhythms radio listeners who enjoyed 2011's "No Thief Like Fear" and 2014's "Even This Will Be Made Beautiful". On 17th June Jason is set to release his new album 'Where The Light Gets In', having worked with no less than nine high-profile producers including Jason Ingram (Chris Tomlin, Matt Maher), Ben Glover (MercyMe, For King & Country) and Colby Wedgeworth (Jordan Feliz, Lincoln Brewster). The first single from the project, "Sparrows", is already getting play on US radio. This most poetic of singer/songwriters spoke about his latest project.

"My last album was all about grief," said Gray, "and so I wanted to make a statement right at the beginning of THIS record that it's about hope and that it's got some fun in it too. So I put the pop song 'Learning' at the beginning of the record. I'm usually annoyed by empowerment anthems, which this song is, because I think they can be self-focused and ignore a lot of reality. But in this case I thought, 'I want to tweak the genre to create an empowerment anthem that's based, not on my own power, but on a real confidence in the grace of God.'"

The album's "The Wound Is Where the Light Gets In" was co-written with Jars Of Clay frontman Dan Haseltine, who is also featured on the song. The tune is a message about suffering and how that can develop into hope even when the worst things happen. Gray has definitely been dealing with devastating issues over the last couple of years that include his stepfather battling cancer, while he and Gray's mother almost losing their home due to high medical bills. This followed the 2014 breakup of Jason's marriage and the subsequent balancing act of becoming a single dad, while remaining an active touring artist and providing a stable home for his three sons.

Said the 44 year old singer/songwriter, "The subversive irony of the Gospel is that if you've gone through depression or divorce or loss or failure or a sickness, you are uniquely equipped to be able to bring mercy to other people going through those same things. It removes judgment from your life. It removes self-righteousness or misguided opinions. That's what 'Where The Light Gets In' is about. Don't be anxious about the worst thing that happens to you. The message of the resurrection gives hope that even the worst will produce something beautiful in us, and will ultimately help make us who we most want to be."