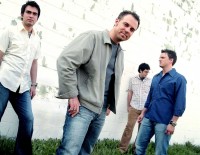 The announcement that Gotee will soon be releasing the DVD version of America's Jeff Deyo's 'Surrender' album will be great news to those who are still nostalgic about the original line up Sonicflood and those who've bought the 'Surrender' CD who are already acclaiming it as one of the greatest live worship albums ever. In late 2003 just after Jeff had finished recording his successful 'Light' album he began thinking about what sort of CD he and his band should record next. Having been gone from Sonicflood for almost four years, Jeff realised he hadn't recorded a live CD since 'Sonicpraise' in 2000. Jeff discussed the idea of a live recording with his management and record company, and began brainstorming. He remembered, "Earlier in April, we had had a meeting with Parachute Music founder Mark DeJong, about making the Parachute Festival in New Zealand one of our stops for recording the global album. He was immediately excited about the recording, so we started feeling out the possibilities of doing the entire CD at Parachute."

All the pre-planning began to fall into place. Continued Deyo, "It was set. Parachute Festival was in. Gotee Records was in. January 30, 2005 was the date. And now as I'm a huge fan of Lord Of The Rings I was so excited that we were now on a mission to the country it was set in, to make a live recording in Middle Earth! Now all that was left to do was to work out the details. like how we were going to get all of that recording gear on a plane. and how to avoid potential power disasters (New Zealand runs 220 volts and we run 110) and somehow be able to fit this recording into a festival atmosphere where you don't typically have long worship sets, and make sure we could rent quality instruments, since we can't put the bigger items like drums and keyboards on a plane! Oh year, and would we really be able to do all this within the budget we had been given from Gotee? And would it even sound good when we brought it back to the US to mix it? Whew, what a challenge! And what an opportunity to seek the Lord for answers!"

Preparation of the material began in earnest. "As Jonathan and I neared finishing writing 'Jesus I Surrender' and our song about the cross (which we titled 'Nothing Less Than All Of Me'), the rest of my band and I continued to rehearse and process our list of songs. We considered some of the songs from my 'Saturate' and 'Light' CDs, as we've revamped these songs quite a bit since their original release. In our worship concerts form night to night there are always new and unique moments that happen, and over time some of those moments of free worship become a permanent part of the song.

"We had written powerful extended new sections to the bridge of 'Keep My Heart', 'Let It Flow' and 'You Are Good' so those songs were in. 'More Love, More Power' had become one of our favourite songs to play live, because of a new spontaneous song that had developed as a second half to the song. At times we played that section for 10-15 minutes as a time of free worship, so it had to be included. 'Bless The Lord' was always a huge connector for people from night to night and I really felt it would be an incredible closer for the record."

The 'Surrender' album wasn't going to be all Deyo originals. Again selecting the right songs was crucial. Continued Deyo, "I felt we needed to do this again, so we decided to include a simple yet strong song written by Paul Oakley entitled 'Be Lifted Up' as well as a rockin' version of 'We Are Hungry'. I was a little unsure of 'We Are Hungry' but believed that it could be transformed from the cool melancholy version recorded on Passion's CD in 2000 to a high octane, passionate cry that seemed to be more in line with the lyric. After a little work, that's exactly what happened."

The actual day of the recording of the Parachute set was something that Jeff will never forget. He said, "The MC sounded off the official 'Ladies and gentlemen' and we were off and running. Wow! When the lights hit those thousands of bodies, I was overwhelmed. I don't normally get nervous, but that night my adrenaline was definitely pumping! There were some incredible moments during our worship set. Some of my favourite ones were when I stopped singing and the crowd just belted out their praise to God. The band played amazingly and even did some things we hadn't planned - great spontaneous moments! There were loud moments as well as intimate moments. The crowd sang their hearts out and we sweat like pigs - all for the glory of our God so that he praise might resound throughout Middle Earth! Yeah!

"The spontaneous section in 'Bless The Lord' was certainly one of the highlights, as was 'Jesus I Surrender'. And as the lights faded at the end of the last song and I walked off the stage, I felt a sense of relief, knowing we had at least done what we had come to do - worship our King. That much I knew had happened. Whether or not we captured it in our recording was still another thing."

On the long journey back from New Zealand Jeff began to wonder what they'd managed to record. "As I stepped onto the plane, I couldn't help but wonder what the music was going to sound like once I got home and pulled up the faders for the first time. At this stage we had either captured the worship or we were going to have to start completely over at another venue. Would the passion we expressed really come across in the recording? Would the crowd mics actually give us the ability to hear the crowd singing? Would the sound be huge and full like it was live? Would my vocals be in tune and not harsh sounding? Questions, questions, questions. with answers yet to come. And so with my mind racing and my heart at peace I shut my eyes and fell asleep, just at the plane lifted off toward home."

i am a gospel artist from zimbabwe looking for friends in the same ministry worldover...
please conct me via this mail and i will give you all my details