Jeremy Camp: Capturing "a cry of God's glory" on the 'We Cry Out' CD

One of the outstanding worship albums of the last couple of years is 'We Cry Out: The Worship Project' by Jeremy Camp. With its mix of songs penned by the likes of Tim Hughes, Reuben Morgan, Brenton Brown and Matt Redman and dazzling Camp originals it deserves to be acknowledged as a modern worship classic.

Jeremy spoke to Mike Rimmer about how the 'We Cry Out' project evolved. "The first album I did with BEC back in 2003 was actually a worship album. But as I was doing that record, we decided to go ahead and do more of an original song kind of artist record just because I had a lot of stuff going on in my life. A lot of people know my testimony. For anyone who doesn't, I lost my wife to cancer about nine and a half years ago. I wrote a bunch of songs, just really heartfelt kind of deep songs that came out during that time. So we released that album first. Then a year or so down the road we said, 'Hey, let's put out that worship album that we actually did first'. We put it out, called 'Carried Me: The Worship Project'. Then years go by and here I am now and God kind of laid on my heart to do this worship project, with some songs on it that I didn't even write! I just want to sing these songs of praise, these vertical songs, that just lift up the name of Jesus. It's been really refreshing for me. I've always had that heart, because I started off as a worship leader anyway, and just kind of took the artist route for a while, which has been amazing, because I have been able to share my testimony and share these songs that God has given me during that time. But now I have gone full circle [back to] where I started, doing this worship time. I am really enjoying it. God has done a lot in my heart through it."

So how was the recording of 'We Cry Out' different from the 'Carried Me' album? "Well, 'We Cry Out' was with my whole band. They know the times of worship that we have live in concert. I just said, 'Here's with the order, now let's just see what happens!' You know, I didn't want to have this structure, this time-line, or anything - I just wanted us to play and see what happened. I just wanted to be led by the Spirit in every way that we could and I feel like that is what is being portrayed so much deeper in this record. We weren't constricted by the time, or it had to be this long or anything. It was like, 'Let's just go with whatever happens', and there was a lot of prayer that went into it. Me and my producer (Brown Bannister), we both co-produced, were both on the same page, just saying, 'Listen, I don't want this to be formulated or anything', and I sort of said, 'How is this going to be, because these songs have been done by ever so many.' Songs like 'Mighty To Save', 'Everlasting God' and 'Never Let Go'". And Brown said, 'Listen, if that is in your heart and you've been playing those live and that's your desire, do it because it's going to come out in your passion and what God has given you'.

"I am so glad I did. Some people have been giving me flack: 'Why did you do songs that everyone else has done?' I respond, 'I am just answering what the Lord has called me to do'. I feel so encouraged by singing those songs. Even the guys in my band feel encouraged, because it's something through which we are able to portray our hearts, even through songs that we didn't write. So, it's been really good letting God do whatever he wants to do - it's always been that way for me but just even more so, you know, because you can get caught up in these formulas and how this is supposed to be and I just don't like that - that's not my heart. I want to be level with the Spirit and when you are level with the Spirit, things are truly effective." 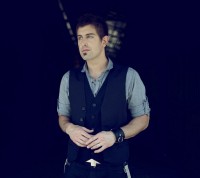 One of the outstanding cover versions on 'We Cry Out' was "Overcome", written by Jon Egan. Jeremy's version turned out to be one of his favourite tracks on the album. The arrangement is a big choir. Instead of a paid choir, Jeremy brought in friends to create that big vocal sound. He told theworshipcommunity.com, "We knew their hearts would be right. God was there in that moment." He explained further, "During the recording there was a spontaneous moment of worship. The producer raised his hands, and my father was there; he stood up and worshipped. I had to stop singing from all the emotion. We felt God's Spirit was so thick in that room - and I would never say that lightly." He said that part of what made that experience so amazing was that as they sang through the bridge ("We will overcome by the blood of the Lamb and the word of our testimony/Everyone overcome") that he just knew that God's hand was all over it.

As well as the stunning covers, 'We Cry Out' also contains some fine Camp originals. Jeremy spoke about the songwriting process. "I spent some time co-writing with Matt Maher for this project. Before we started, we talked about Scripture that was really ministering to us at the time. We prayed and asked God to give us a song." Jeremy's "process" for songwriting is all about "what God is showing me". "If it doesn't really resonate with me, I don't feel able to write it."

After the were finished with the project, Jeremy's brother-in-law, Brad Peens, showed him an idea for a song that included an African choir. Jeremy had a few ideas for the song and they re-wrote it together. "It's very anthemic, a worldwide kind of song." It contains such lyrics as, "All creation cries out with longing/With wisdom you always answer/Jesus, you are the Way. Commented Jeremy, "It feels like a war song, a cry of God's glory."