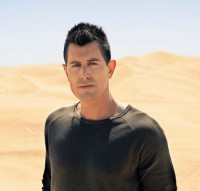 SPARROW Records have released the single "Dead Man Walking" by Grammy-nominated singer/songwriter Jeremy Camp. Camp recently wrapped up a spring tour of the US with TobyMac and is also heavily involved with the biopic feature film about Camp's life, I Still Believe, currently being produced by the Erwin Brothers (I Can Only Imagine). Talking about "Dead Man Walking" Camp said, "Colossians 2:13-14 speaks of our lives before Christ as being 'dead'. There was a time I felt emotionally and spiritually dead, but then God changed me radically. That is why I'm excited to share 'Dead Man Walking' - because it's a song of thankfulness that even though I was once a 'dead man walking' I'm now a man 'walking with God'."