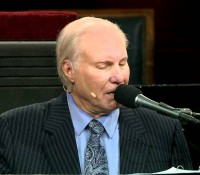 I normally watch a bit of television on a Saturday afternoon. Usually it's sport or an old movie but on this particular Saturday (24th February) I decided to see if I could find any Christian music on TV on the multitude of channels now available to us. So that was how I stumbled across one Robin Hird on the station SBN TV which I had never watched and was unknown to me. Robin was a pretty good Southern gospel singer who took an enthusiastic congregation through the song "Look What The Lord Has Done". I warmed to its jolly, hand-clapping infectiousness as the middle-aged Robin crooned "He healed my body/He touched my mind/Come on and praise him/Look what the Lord has done." What came next - the preach - had me (later) filling in some gaps about what I was watching. For Mr Hird wasn't the main attraction either on this programme or in the plush Louisiana Auditorium where he was filmed. For the preacher I'd stumbled across was the famed Jimmy Swaggart and indeed he is the pastor of the Family Worship Center in Baton Rouge, Louisiana and SBN stands for SonLife Broadcasting Network.

As the Rev Swaggart began to preach I momentarily pondered that up to this moment I had never heard this most famous of TV evangelists preach. After the scandal that enveloped his ministry in 1998 which ultimately led to him being defrocked by the Assemblies of God and another scandal three years later involving a prostitute, Swaggart disappeared from my personal radar. In fact, I've managed to be actively involved in Christian media under the assumption that the Rev Swaggart had long since retired. Yet there he was on my TV set preaching, and preaching well. He expounded Scriptures without any discernible notes or Teleprompt and, considering the nature of his highly visible fall into sin, didn't flinch from warning the rapt congregation to defeat those giants within such as Internet pornography and hard drinking. He then made the point that not only should we avoid sin but we needed to be walking close enough to God to hear him when he guided us away from things which would not in the long run take us in the direction God wanted us to go. Jimmy brought in a story about an encounter he had had back in the '50s.

One day, long before fame and fortune came to Jimmy, when he was at a dinner-on-the-ground at a small church, he was surprised to see a shiny new limousine draw up and the father of rock and roller Jerry Lee Lewis get out. Jerry was Jimmy's cousin and Jerry's father was visiting Jimmy to bring him the exciting news that Memphis' Sun Records, awash with cash after their hits with Elvis and Jerry Lee, were offering to start a gospel record label and making their first signing preacher/singer/pianist Jimmy Swaggart. Instead of the expected excited acceptance, Jerry Lee's father got a "no thank you". Jimmy had heard the Lord and in that season at least turned down any immediate chance of substituting his beat up old car for a new limousine.

After Jimmy's preach one of Jimmy's sons Gabriel offered an ineptly delivered link from the SBN studio before introducing another musical item, this one from a black girl called Tara Montpetiit. She sang a slow hymn without really catching fire though I was impressed by the quality of the Family Worship Centre's backing band with both the guitarist and sax player offering tasty licks. Time was getting on and I wondered whether the veteran preacher would treat the congregation/viewers to a song before the programme closed. After all, in the '70s Swaggart was a major player in Christian music. In 1977 he was a Dove Award finalist in three categories, Male Vocalist Of The Year, TV Programme Of The Year and Instrumentalist Of The Year and in both 1976 and 1980 the Grammy Awards nominated Swaggart's albums.

I couldn't say though that I was anticipating much from the preacher singer. The few of his vinyl albums that I've heard tended to be stentorian and languid versions of old hymns completely lacking the boogie boogie adrenaline of his rock 'n' roll cousin. Therefore I was stunned when the aggregation announced as the Family Worship Centre Resurrection Choir came on screen. The choir featured Jimmy singing with the soul and passion of a man half his age. Jimmy's call and response fire was truly exciting as he roared out his delight in being saved as he stood in front of the 35 or so singers in choir robes. There was even some nice sax and bass guitar solos. Jimmy was singing, to quote from his sermon, "on the glory side of Egypt" and I, like the congregation excitedly handclapping and dancing in front of him, was left in no doubt that whatever his sins and mistakes of the past the Rev Swaggart was truly excited about having "a new song to sing."

Love SonLife Broadcasting Network (SBN). The Message of the Cross is the true message of Jesus Christ.

Love Brother Swaggart and the entirety of his ministry.

Outside of Jesus Christ is Apostle Paul the greatest preacher of the Gospel leading Man to the Greatest message ever preached which is Jesus Christ and Him Crucified .Now this present time stands another great preacher of the Gospel and he is the incomparable and the inimitable evangelist Jimmy Swaggart . Yes peoplepole you heard right and to all the scoffers take heed to Jesus when He said Let him who hath no sinned cast the first stone . David of whom God said He is a man after My own heart .David committed adultry and yet God blessed him Solomon .God is Forgiving and forgave Jimmy sSwaggart and blessed him with the knowledge of the Cross and proclaim Jesus Christ and Himself Crucified .The only preacher who unequivocally states that all blessings / every problem /every need of the human heart is found in the Cross and Cross alone .In Jesus Name Amen

I stumbled upon this article as I happened upon SBN over a yr ago as well. I too, have been a pro musician & near 70 now...still playing, albeit fewer gigs these days, but still in the saddle. I was very moved by Swaggert's Choir, quality Musicians & soloists, late one night, when I was in need of a touch of God's spirit. Upon further investigation I went back to do a review of those terrible days when Jimmy fell from grace. There's a lot of negative stuff on the web & he certainly had a sexual addiction problem in his early yrs...w/some christians who still harbor judgements against him-yet at this point I feel God is using his frail 80's in a dynamic way. He reminds us, that man is in need of JESUS...all of us, who sin & fall short of the glory of God. Does this excuse any of his past-No-but I feel his ministry today has grown B'cuz of the important message he gives: That we must all lay in humility @ the foot of the CROSS, cognizant of our broken sinful nature if we are to truly give our "all" to the LORD. If Swaggert has a 'con' going on, as some suggest on the web, God will deal w/that...but as far as I'm concerned, the Worship & teaching (for the most part) on SBN is moving & healing for anyone who softens their heart to Jesus. I've found that turning on SBN during my day is SO uplifting & keeps my heart happy in a world gone mad. Great WORSHIP & I feel God is using Swaggert in his later yrs to touch many.

Glad you found Jimmy Swaggart's programme. After singing for a job for well over 40 years my body clock says bed time is about 5.00am and I love to watch Jimmy's channel in the small hours. As a massive fan of Jerry Lee I feel a bit sad that his cousin is now a far better player and seems to be in great form for someone in his 80s. By the way, Gabriel is Jimmy's Grandson not his Son.

yes I catch Jimmy Swaggart on SBN and i am a 55 year old woman who was a young married girl when his fall occurred. I believe he is a Christian and deserves his place to preach. He is an absolute amazing preacher when he gets going I am moved. In fact I accepted Jesus as my personal saviour during a Jimmy Swaggart Sermon. And the energy he has at his age . God Bless Jimmy and family. Keep going