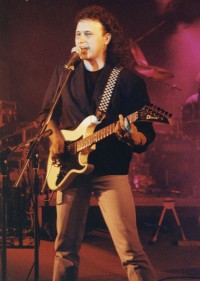 On the cover of Johnny Markin's newest release, he confesses, "I grew up surrounded by acoustic instruments and singing songs with family and friends. This album is an attempt at recapturing the atmosphere of simplicity in those sessions. As well, many of the tracks were recorded in one pass and with few overdubs, to try and capture the natural and again simple atmosphere of a time of worship. This in turn, I hope, reflects the honest and heartfelt nature of my own worship songs." Thus was born the excellent 'See With Your Eyes' album. I asked Johnny about his album and his current involvement in worship ministry.

Mike: You're best known as a contemporary artist/guitar hero so why record a worship album?

Johnny: "I've actually been involved in worship at a church and local level since the early '80s in Canada. It's been a stream of my ministry running parallel to the contemporary during this time. I've led at events such as Spring Harvest, from time to time, especially in the youth events. I was also involved, for several years, in putting together the 'Praise Mix' albums for ICC/Spring Harvest for about four years in the early '90s. During that time, some of my worship material was used in the books and on the albums ('We Have Come To Celebrate The King', 'To Have The Same Mind As Christ", et al). With my move to Lincoln in '92 and consequent involvement with Chris Bowater, a new platform came through Grapevine as well. With the increasing leading and worship writing I was doing, ICC suggested a worship release alongside my other projects."

Mike: Isn't it just jumping on a bandwagon?

Johnny: "I don't think it's jumping on a bandwagon, because I had more than enough work in strictly contemporary ministry, both in the UK and in Europe (particularly Germany, where I've been touring regularly since 1990). Moreover, the songs have been a natural outgrowth of where God has taken me over the last three years. On top of that, I've been doing many concerts/events with Chris Bowater. Since that has opened up a new audience for what I'm saying, I wanted to craft something that the 'non-youth' age range would listen to. As I've always maintained, it's the ministry that warrants the product, not the product producing a ministry."

Mike: What's the difference between what you do as a contemporary artist and what you do with worship?

Johnny: "I see my worship and contemporary streams really blending into one at the moment. We have no problem dropping some of the new songs into our contemporary set, and their reception both here and abroad has been very, very warm. Indeed, not only has this album opened up an older age range, young fans are writing/emailing to say it's the best album I've ever done. By the way, my web site is http://ourworld.compuserve.com/homepages/ Markinnet"

Mike: You recorded the album at Chris Bowater's house - an unusual way to make an album!

Johnny: "Chris offered the use of his house while he was on holiday in France for two weeks. He and his son, Daniel, have opened a new studio here in Lincoln, but the premises had not been secured. So, because ICC were fully booked, it was about the only option. But it did create a really great, relaxed atmosphere."

Mike: Was Chris an influence in putting the album together"

Johnny: "Certainly Chris has had an influence in helping me find some direction in my approach to worship ministry. It's great to draw from his wealth of experience, and he was actually encouraging me in this direction long before I recognised it."

Mike: Are you involved in the worship at your church in Lincoln?

Johnny: "Yes, I lead regularly on a rota with Chris, Trish Morgan and some others. We have a number of services throughout the week and there are Ground Level church network events, as well."

Mike: Let's talk about some of the songs. Tell me about the title tune.