Jordan Feliz: The singer songwriter faces the Future with his new album

Jordan Feliz may have a background in hard music (he was once the frontman of A Current Affair), but it's his Centricity albums 'Beloved' (2015 - reaching 22 on the US Christian charts); 'The River' (2016 - number four on the charts) and now his latest album 'Future' (which has reached the US chart top spot) which have found a big audience for his folk, pop and soul-tinged songs. Jordan wrote most of 'Future' on the road during a hectic tour schedule. Eight other songwriters were included in the songwriting process. He said, prior to the album's release, "This record is just chock-full of story. It's kind of me taking a piece of my life, my heart, my beliefs, and my trust in God and just giving them to people." I began my conversation with Jordan by asking him how the recording process of 'Future' differed from his first album project.

Jordan: "It was almost polar opposite. With the first record, I wasn't selling yet, and I also wasn't touring at all. There wasn't a whole lot of pressure. With this record, we're gone almost 200 days a year, writing on the road a lot. The first record you have as a signed artist, you almost get like a pass: 'There's no expectation on this. Just write the best songs you can, and we'll see where it goes.' Then it was this massive success, and it was one of those things where you're like, 'Now I have to back this up.' I started believing the lie that I was never going to be able to. Anxiety and stress made it difficult to write this record. I was like, 'Man, am I ever going to be able to do this?' The moment that I realised, honestly, that it didn't matter what I could do with my own strength - I could write the best songs I could ever write but it ultimately would achieve nothing, it would have nothing to do with my future - that was one of the biggest things for me. The moment I learned that I could give it up, and the Lord would just take it - I could literally do whatever and just listen - that's when I truly found inspiration. I felt like the Lord really poured these songs out, and here they are. I'm really excited that it drops tomorrow; we're only a day away." 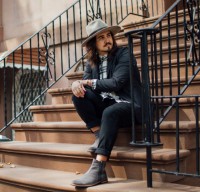 Tony: We have all kinds of worries, but the Bible tells us to worry about nothing at all. It's a simple truth, but a hard one for people to grasp.

Jordan: "It's really hard, and I think it's because of the way that we're wired. If I told you, 'Stop worrying about your finances - for the rest of your life,' that would be a feat for 99% of our population. You can't just give it up, but we totally can, we just choose not to. It's so difficult, because we want our hands in everything; but it's not our hands that's needed. That's when we find out what true freedom looks like, we find faith. Jesus is in this, and I've got my hands out of it. No matter what I do, he's going to be my provider. As long as I'm a good steward, and as long as I'm a hard worker, he's going to do the rest. He's going to be the one that tells me how to manage my finances."

Tony: Which song on your album do you hope will connect with the most people?

Jordan: "That's a tough question: it's like, 'Pick one of your kids.' There is one called 'Faith'. It was the second song released, and we've seen an incredible response. It has no radio play and we're almost to a million plays on Spotify, just from a cold release. This song sums up the record. It deals with what we just talked about, having faith in God that he is our provider. The chorus is, 'He's light to the shadows, he's hope for tomorrow, he's there in the sun and the rain.' It's one of those things - you've got to believe it before you see it. 'You can move on because he's making a way' - that's the lyric of the chorus. That's what our entire belief system is about: we're putting faith in someone that we experience in our hearts and in our souls. That's what faith is, believing what we can't see but knowing that it's true. The more faith that we have, the more we're going to see our future, our present, everything just grow exponentially. That's something I really want this record to pour out, and it's a song that says it."