Tony Cummings spoke to the "Getting Started" rapper, JOSE KELLY 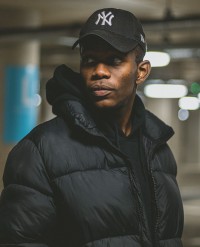 Mozambique and Oxford are culturally worlds apart but that hasn't stopped rapper Jose Kelly from landing an xRhythms radio hit with his infectious "Getting Started". Since his emergence onto the scene in 2016 with the single "Catch Me If You Can" the emcee has released the albums 'Lost Heroes' in 2017, 'I Once Was Lost' in 2018 and the EP 'Getting Started' which has spawned his hit. I asked Jose to tell me something about himself.

Jose: I was born in Mozambique on 1997. That's where I've lived most of my life.

Tony: What brought you to Britain?

Jose: Mostly family. Oxford is where my mother lives so I come around to spend time with her.

Tony: There must be an obvious clash of cultures and lifestyles between the two countries?

Jose: Yes, definitely, Mozambique, especially the area where I live; the lifestyle is much slower. People are not always running around trying to get to work. I'm more in contact with family and neighbours; we're all familiar with each other, contrary to here in Britain where you know a specific amount of people and it's just quieter in a sense. There's more time for you to sit down and reflect on things in Mozambique.

Tony: How long have you been rapping?

Jose: Yes, that was my first official recording.

Tony: And how did you get into rapping? How did that start for you?

Jose: I became a Christian around that time and I wanted my friends to experience my faith but a lot of them would refuse to listen to Hillsong and the more traditional church music. I couldn't find anybody who made music that they could relate to and at the same time glorify God so I felt in my heart that I was to step in between and be that person.

Tony: Did that lead to a whole series of recordings? You've been pretty busy making recordings since you started, haven't you?

Jose: It was immediate. I felt a lot of people just gravitated towards me. People who love music and love creating music so we teamed up and we started working immediately. I think we had like, four projects since then.

Tony: So who exactly are "we"? Who are you working with?

Jose: I founded a record label that goes by the name D/Hope Records and it's a collective of individuals: singers, rappers, artists; we also have producers, people who make movies, films and all that stuff.