Julia Harris: The dreadlock angel who's getting mainstream attention

With her single "These Days" a favourite on Cross Rhythms radio, JULIA HARRIS talks to Mike Rimmer about her music and faith. 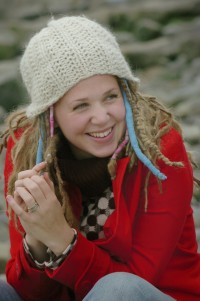 The first time I heard "These Days" by Julia Harris, it was Tony Cummings who was brandishing a copy saying I should play it on Rimmerama and now only a few weeks later Julia Harris herself is sitting in the studio being interviewed on the programme. Though at the moment as I watch her, she's not talking, she's singing and slapping her guitar in that rhythmic way that characterises her playing. She has a way of bobbing her head ferociously with the rhythm and eventually the inevitable happens and her headphones slip off her head as she sings.

Harris is Welsh, born and raised in Cardiff. I check to see whether she speaks the native tongue but she doesn't. My Welsh wife will be disappointed. "I know how to say 'I love sweets'. That's about it really." Very useful I point out. "Yeah.in a sweet shop!" she counters. "Dwi'n Sais twp" I respond. She looks at me blankly. It's Welsh for "I'm a stupid Englishman." Strangely I've found it to be a very useful phrase when visiting Wales.

So what is Julia going to do when she's asked to sing Welsh songs? "Well, I haven't been asked as yet," she confesses, "but I do proudly sing the Welsh national anthem at rugby matches."

Julia grew up in a house where her dad's huge record collection was a major influence, from Buddy Holly to Paul Simon by way of many a classic rock and pop album. So how did she end up being this acoustic, almost folky pop singer? "When I was probably about 11 or 12 I think, the first CD I bought was Tracy Chapman. I was learning piano at the time so it kind of made me want to pick up the guitar and start playing some of her songs. So that was probably the major turnaround I suppose."

Before she emerged as a singer/songwriter of a folky pop persuasion, she had played bass and sung in a couple of bands from the age of 17. Her current guitar playing is very influenced by the rhythmic approach of playing bass. She describes one of the bands she played in, "It was called Westgate Street. We did quite well and we had a bit of a following. I started opening for them in Cardiff if we had a big gig and people kind of said, 'Why don't you do more of your own stuff or record something?' So it was just from that really. Just people taking an interest in my songs."

Julia spent some time living in Ireland. "It was when I was with the band Westgate Street and we'd been over there a couple of times. I'd just got married and I fancied a change. My husband was actually the drummer in the band as well. So we just went on an adventure I guess. But unfortunately it didn't happen over there and I'd started to gig as well and that was going really well. So I almost did the switch then while I was there and started gigging on the circuit. Then I got a manager and he started booking gigs in London. So I started to fly to London every five or six weeks while I was living in Dublin. So it's quite recent all this and I'm still learning."

In the meantime she's been opening up for some artists including Damien Rice and Amy Wadge. Being so close to people who have gained popular success must be an encouragement for Harris, who certainly has the talent to become popular. She's enjoying the experience of growing into all of this. "I think it's about playing the songs to people and just seeing what the response is and hoping they like it!"

Her debut single "These Days" has gained a mainstream distribution deal through respected indie distributor Pinnacle. There's also a live album from three or four years ago which Julia is flagging up once again since her newer fans won't have heard many of the older songs. And then there are plans for more studio recordings.

As far as her faith is concerned, Julia tells an unusual story of how she became a Christian. "Well, a lady called Mary knocked on my mum's door one day and invited her to go to a local church. So my mum went along. She went for a few months and then I asked questions like, 'Where are you going every Sunday?' So I just started going along with her when I was about 9. It was charismatic and it was called Springwood. It was very lively. Great band. And being from a house with lots of music I suppose it drew me. I used to like a bit of a dance I suppose. I met loads of really nice friends. Probably about a year after I made a commitment on my own. When I was about 10 my mum led me to the Lord and stuff. And then I just got stuck into youth groups and that kind of thing really. But nothing very dramatic, just through that friend Mary two doors down, planting a seed."

Julia's music and faith have always been linked together since she only started playing bass to be part of a church worship band. She remembers, "There was a youth worship band they wanted to create and so I went into that role of playing bass and just did backing vocals and things. But it was never something that I did all the time. It was just a hobby on the side and I just did it for fun to begin with, as a lot of people do I think. I suppose it just grew and grew."

She continues, "Then I started playing in the main worship band. Then I did little bits and bobs with the youth. Like we went and sang in youth groups and stuff and started to do covers and that kind of thing. Just to make it more fun! So yeah, I suppose growing up in that Christian sense it did circle around the music thing. I suppose it did keep me on track in a way."

Julia sits opposite me in the studio smiling. Did I mention she's got the most amazing hair? She has gingery blonde dreadlocks. Are they weave ons? I ask. She looks offended, "No it's really my hair. It's fab isn't it?" She's a white woman with dreadlocks! "Well, do you know what I got called actually?" She looks proud. "The Dreadlock Angel. I thought that was really nice!" I say, "You have to write a song about that." "Yeah" she agrees, "it's a good title."

And she's got time to do it now. She quit her job to go full time this year. No more turning down gigs because of her day job and plenty of time to write new songs. "It's quite scary," she admits, "but it's something that I feel is the right thing to do. I feel like I'm being obedient."