Kathy Troccoli: The Nashville CCM hitmaker returns with an album of Pure Attraction

After a long hiatus, America's KATHY TROCCOLI is back with the CCM frontrunners. Tony Cummings reports. 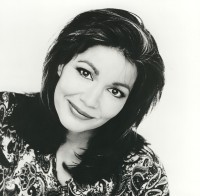 In 1982 Kathy Troccoli's debut album 'Stubborn Love' was a smash CCM hit for Reunion Records. Ten years later her new album 'Pure Attraction' is a smash hit again for Reunion Records. Now it's produced a crossover hit single in the States, "Everything Changes", going top 20. Yet in a recent news item on the Grant/Smith 'crossover' gospel phenomenon on national US television, Kathy was described as a "newcomer". Such are the ways of mass media reportage. But in truth, the Kathy who? scenario probably also has something to do with the fact that in 1986 Kathy left Nashville and turned her back on gospel music. Yet Kathy cringes when the word "comeback" is used.

In an interview in CCM magazine Kathy told journalist Sandy Smith, "I don't think I've comeback. It's a whole new day for me. It's not like I'm coming back with my legs tired and my feet bleeding and hanging my head low. I'm starting at this point in my life with everything that I've desired to do."

"Everything" includes a project that melds unabashed pop love songs with unashamed declarations of love for God. "That was my problem years ago. When I was doing gospel music, I really missed singing the torch songs. I didn't really realise how much I loved singing about my faith until I left gospel. Jesus is my love. I know a lot of people have trouble incorporating both of them, but for me, it's a well-rounded record of who I am in my life".

Kathy's desire to sing both pop and gospel songs made a "reunion" with her old record company the only choice, she says, "I felt like it was right, the way their vision is for music. I was able to sing a song like "Help Myself to You", a song which is so incredibly intimate about time alone with Jesus, at the same time that I'm singing "You and I", which is a remake of a Stevie Wonder song that I've loved for years".

It didn't hurt that at the same time Reunion's Mike Blanton was pursuing K.T., the label was signing a distribution agreement with mainstream giant Geffen. "I didn't go to a pop label because I didn't want to be put in a box, able to sing just the pop songs they wanted me to sing. And I didn't want to go to a gospel label that would only want me to sing exactly what they saw for gospel music. I felt like Reunion gave the incredible freedom to do both."

In the beginning, there was no Reunion Records. Just two artist managers and their newest client, a New York torch singer with a funny last name. "They moved me to Nashville because they wanted me to make a record. I ended up singing for lots of people and Dan (Harrell) and Mike (Blanton) couldn't get me a record deal. I think it was because God really wanted Reunion Records started. Everybody responded well to my talent, but I had a breathy, darker voice and they didn't know what to do with me. Thank God Mike and Dan really believed in my talent. They said, 'We'll just start our own record label.'"

They put Kathy in the studio with Brown Bannister. The result was 'Stubborn Love', which sold 100,000 units and became one of gospel's most successful debut albums. Three more albums, 'Heart and Soul', 'Images' and 'Portfolio', followed. But within three years, she'd had enough of gospel music.

"I still had so much to walk through in my life. I carried my emotional baggage and brokenness to Nashville. Instead of really getting grounded in what God said about me, I'm wanting Mike and Dan to tell me who I was. I wanted them to find me tunes. I wanted them to put me in front of the audiences I needed to be in front of. I wanted them to almost act as father-counsellors and record company at the same time. I put a lot of unrealistic expectations on them".

At the same time, she realised she missed singing pop songs. "I wasn't content with what I was doing musically and I was getting more and more unhappy because spiritually I wasn't okay and emotionally I wasn't okay".

So after a 70-city tour with Michael W. Smith, she told Reunion she needed to leave. "I'll never forget the day I left. Mike Blanton said, 'Kathy, I know you'll be back.' I thought, 'You've got to be kidding.'"

At the time, the word was that K.T. was leaving gospel music to sow her vocals in the bright lights, big city world of pop music. "That was part of it. I've done a lot of interviews lately where people say 'The rumour is you couldn't make it in pop music, so you came back to Reunion.' I want to say 'Well, you haven't really listened to my record.' I've really accomplished on 'Pure Attraction' what I set out to do in 1980. So, yeah, I guess pop music was part of it. But God obviously had a bigger plan for me because he was so much more concerned about my heart. The two started coming together in the last five years."

While God's emphasis may have been on Kathy's heart condition, he didn't leave her twisting in the windy world of pop. She sang background vocals on Taylor Dayne's last two projects. That's where she met producer Ric Wake, friend of female vocalists everywhere and producer of four songs (including "Someday") on Mariah Carey's zillion-selling dÃ©but album.

"The two of us really hit it off. He knew I was struggling to absolutely find what I wanted to do. He said, 'When you get your stuff together, give me a call.'"

But Kathy wanted to perfect her songwriting and passed up plenty of opportunities to "make it" in pop music. "My family thought I was crazy. But I didn't want to do songs that I could never own for myself. I could never sing the lyrics. I thought, 'If I do another record I don't feel comfortable with, I might as well dig a hole and sit in it.' I'm the one who has to own these songs. So I decided to set my hand to the plough and just do it."

She began writing and four years later has writing credits on seven of her project's 10 songs. (The other three are from Stevie Wonder and star songwriter Diane Warren, whose credits include Cher's "If I Could Turn Back Time" and Michael Bolton's "When I'm Back On My Feet Again;" not bad company for a novice songwriter, eh?)

If there's one thing Kathy's sure of, it's that she's right where God intends, a far cry from the 80s lady.