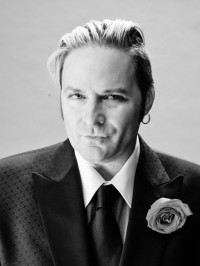 There's probably no Christian music career that has taken as many twists and turns as that of Kevin Max. A full list of his accomplishments and creative detours would almost be an article in itself - suffice to say that having been a part of dc Talk as they transformed themselves from perky pop rap purveyors to a grungy rock band while still writing books of poetry, Kevin continued on by recording classic Queen-like rock, retro-blues gospel, synth-driven alternative dance, intense acoustic songsmithery interspersed with a shot at movie acting then capping all that he amazed everyone by a spell fronting CCM hitmakers Audio Adrenaline and then, amazing everyone again, by leaving the band after one album. At the time of his departure he assured New Release Tuesday website, "They wanted to go in more of a direction of vertical songwriting. I'm kind of a creative spirit, and I feel like I needed a little more space to write things I feel like went beyond that idea. We sat down and prayed about [parting ways]. We really went to God with it. We wrestled for a little bit. I love the guys in the band, and I wish them the best."

Now this most creatively charged singer/songwriter is back firing on all cylinders. His fan-funded 'Broken Temples' independent album, released on 10th March this year, received predominantly enthusiastic reviews. Roger Gelwicks wrote, "The opener 'Good Kings Highway' is reminiscent of U2's famous 'Where The Streets Have No Name," and "Light Me Up" is the most radio-friendly of the album (perhaps to a slight fault), and that's just the start. Other highlights include the infectious bass-led "Clear," the epic nature of "White Horse," and the show-stopping finale "Infinite" (complete with a brief but impactful appearance by Rachael Lampa). . . His latest effort will most assuredly be one of the finest achievements of CCM this year."

Now Max is readying what he calls a "covers dream album." He spoke to Jesus Freak Hideout about 'Starry Eyes': "'Starry Eyes' is a project I have been working on under the radar after my release of 'Broken Temples'.... As many of you know I am a pretty restless soul when it comes to the Arts... The decade of 2000-2010 saw me releasing several solo albums and EPs as diverse as anybody could have predicted. In those years I crafted songs quite a distance away from the band I had been in the decade before (dc Talk, 1989-2000). It became clear to the listeners and supporters that took the journey with me that I had a passion for music in many different forms. From the first release 'Stereotype Be' I was creating music that inspired me and took me to the places I felt I could not go within the structure of dc Talk. 'Between The Fence And The Universe' and 'The Imposter' continued in the vein of European inspired rock and roll, but 'Ravensongs 101' with Adrian Belew took a sharp left turn into spoken word poetry. Then a brief foray into gospel classics with 'The Blood' and back out into exploration into the fine art of electronica with 'Cotes D' Armor'. Not to mention the sidetrack EP 'Crashing Gates And Passing Keepers' which made a declaration of rock and roll amidst all of the genre changing and bending. That album sports one of my favourite solo songs ever, 'Traveler', which is far from a perfect song but embodies all of the raw emotion and lyric that I had been after for years.

"In 2011 I began talking about re-entering the CCM world by taking on the lead singer role with the band Audio Adrenaline. . . My friendship with the original members and the heart for helping Orphans In Haiti took me on the road from 2012-2014 with that venture. . . but after a lot of thought and a firm conviction in what I do as an artist I am back into the realms of music as a solo entity. . . but this time the chapters of the novel get even more diverse and challenging. 'Starry Eyes', much like the project 'The Blood', is a covers dream album. I don't like covering in a standard way, as also seen in the EP 'Fiefdom Of Angels Side One'. When it comes to reinventing another song, I take the process quite seriously, from the fundamental arrangements to the vision of where it should go, how it can move beyond the original and retain its former glory. That is a daunting task with some of the songs I have chosen for this release. 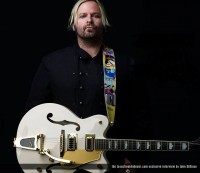 "The first song that you will be able to hear is a classic in every way. Eden Ahbez's 'Nature Boy' was a song about the grand adventure of life and what it was like to inherit wisdom. When Nat King Cole took the song and made magic with it, it became an instant household classic. Covering something like this is sometimes like jumping off a cliff into questionable waters below. Defiling a timeless piece of art is possible. And that is why I delicately chose each song on this project, and the producers that will bring them to life. I can confidently tell you that this release is going to continue the path that I have chosen musically of grand adventure. I have never been one to seek out what was trendy or radio-driven. I have never been a fan of polished pop, or the over-usage of auto-tune and writing with a prescribed formula for hit making. I have been a lone musical soldier, pioneering?-(madman) walking across the frontier, looking for truth in the obscure.

"I believe for all of you that saw my choice to make 'CCM' titled music with AA and 'Broken Temples' as a step backwards in the progression, you will see that it is just another chapter in this chaotic assembly of songs. I have never taken the easy path, but with this project I contend that the difficult path can sometimes bring you to quite glorious places of reflection. Thank you to all that have stuck with me, I cannot let you know enough how much you all mean to me. The only thing I can give to you in return is my music."