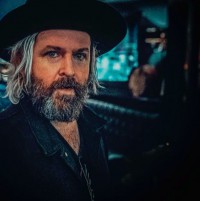 ACCLAIMED singer/songwriter Kevin Max is to record his own version of the album 'Only Visiting This Planet' by the late Christian rock pioneer Larry Norman. Said Max, "For years I wanted to make this album, it's been in the back of my mind to create as early as 'Stereotype Be'. The timing has never been right though until recently. I was talking to a friend online named Mike Norman, who just happened to be Larry's son. We talked back and forth for awhile and I asked him to come to a show I was doing in Portland, Oregon last year. He showed up with his beautiful wife Tiffany, and we had an amazing time reflecting and sharing conversation after the show. I told Mike that I had wanted to cover the whole album 'Only Visiting This Planet' for years and I was waiting on God to let me know the appropriate time to do it. He encouraged me to get it started and told me that his father would be very pleased and excited for me to do it. To get Larry's son's blessing was all I needed, and here we are off to the races!"

Max continued, "Mike Norman and I have become great friends over the past year and he introduced me to one of his dad's best friends, Allen Flemming. Allen is working on a biography about Larry, titled Rebel Poet. Allen will also be very much a part of 'Revisiting This Planet' by adding narrative from the book to the musical selections. Along with Mike Norman and Allen Flemming, we are excited to also get Larry's wife and Mike's mother Sarah involved in the project as well." The first recordings for Max's 'Revisiting This Planet' will begin in August. A crowd funding project has been launched.

Kevin has such a fantastic voice, I am sure the new album will be wonderful and inspiring.

This is very exciting to hear! I followed Larry Norman in the 70's and early 80's, and I remember him mentioning "Only Visiting This Planet," but since I was still in school I did not have access to a copy. K Max's voice is perfect for this re-make, and I know that many will be blessed by its added content! May the Lord show you great favor during this re-make, and may Wisdom be your constant companion!

This is AWESOME news! I will buy that album, Kevin!

looking forward to outcome this creative project. So many memories of Larry's music & live concerts in Aus.