Malcolm Tyrrell: A Bucks based songsmith with a Jesus music past 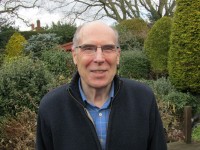 Malcolm Tyrrell was surprised when Cross Rhythms contacted him to do an interview. He was even more surprised when he heard that the much respected tome Archivist: Vintage Vinyl Jesus Music 1965-1980 had praised his 1973 album 'Lost Property' ("Melodic British singer/songwriter, a musical jack-of-all-trades who samples folk/pop ("Sunshine Man"), folk/psych (the organ-backed "Flowers"), country ("Shoreline") and gentle acoustic ("Holy Spirit")). And Malcolm was flabbergasted when he learned that devoted collectors of folk/psych were paying $250 for his ultra-rare album. So how did this 65 year old Exeter-born songsmith who today is a member of the worship team of a local Baptist church in Chalfont St Peter ever start making music which decades on would find such unexpected admirers?

Even from the earliest days Malcolm had no dreams of ever becoming a full time musician. He said, "Way back, after I took my O-levels, I had recently stopped taking piano lessons and I was teaching myself guitar. I was thinking should I pursue music or should I go further into science? I remember praying about this and concluded that I should take science and keep music as a hobby, and that's what I did. The singing or playing I was doing was mostly on my own because I was hardly ever part of a group to rehearse or practise or have any type of continuity but I've been able to keep my 'hobby' alive and that's something I praise God for."

In 1968 Malcolm released a self-financed single, "Child In A Manger". He recounted, "The very first single I did was with a guy I met called Steve Kendall His parents had a large bedroom with an en-suite bathroom and he had the reel-to-reel tape machine in the bedroom and I sat the en-suite with the guitar and a microphone. That was our recording studio." The following year the singer/songwriter released an EP, 'Malcolm Tyrrell Sings', on a tiny independent label put together by Kendall, Roundabout Records. Also in 1969 a various artists EP was released by Roundabout, 'Excuse Me But. . ." featuring Malcolm's track "Forgive Me Forgetting" along with tracks by B Smithson, Nigel Purdy, The Gospel Sound, S Jaynes and the Clearways.

By this time Malcolm was working in the Caribbean in agriculture, wrestling with the complexities of sugar cane and banana crop production. His job, however, left him with plenty of time on his hands. He remembered, "While I was there for three years I was writing songs. Back in the UK there had been prophecy given, in a couple of meetings, which were so vivid to me. They eventually were the basis of two songs in particular. One was 'Waterfall', the other was 'Shoreline'. Other songs were from different experiences or inspiration. So after this period of three years of being away, I had quite a collection of songs that became the 'Lost Property' album. I didn't really know where to go or how to set about producing an LP because the contacts and the previous people that I had worked with weren't really available anymore. But it was my future father-in-law who contacted Don Felton in a studio down in Eastbourne, which led to the production of 'Lost Property'."

'Lost Property' was released on the Echo label which was down the years to become ICC Records and was beginning to emerge with acts like Meet Jesus Music. Considering its tiny recording budget 'Lost Property' was a folk gospel gem though it was largely left to Malcolm to sell copies. The singer/songwriter
endeavoured to sell copies of his album at a residency he had at Fellowship House in Brentwood in Essex, which was organising regular church house parties. He explained, "Various church groups used to come from Friday night to Sunday afternoon and have a time of fellowship and teaching. I was very much involved with leading worship in the course of those activities, and there was an opportunity there to sing on the Saturday evening some solo stuff in the big oak-panelled lounge with a fire roaring." 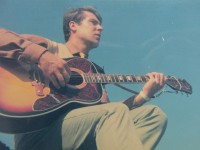 Music began to take a back seat for Malcolm. He explained simply, "I got married. Then children came and we relocated over to Worcestershire." By then with family and work commitments including frequent business trips, Malcolm seldom did a live concert but he would occasionally find the time to write a song. He explained, "I was writing about one or two songs a year, prompted by different circumstances. There was a time when my brother-in-law got married and I wrote a song called 'Genesis Calypso'. Some years later, a niece got married and I wrote a song called 'Two Hearts'. Then I reached 40 years old, so I wrote 'Life Begins At Forty'. My wife and I were in a Little Chef, probably the boys were there too, and we happened to meet a couple on an opposite table that we recognized from a little evangelical church we used to go to sometimes. Their names are John and Eileen, and Eileen was an aunt of Rob Andrews. We got talking about music and she mentioned Rob and Chapel Lane. I got some details, gave him a call, and that led to the recording of the 'Love Is' album at Chapel Lane."

Chapel Lane, based in Herefordshire, had made a major impact on the British scene in the early '80s putting out hugely influential albums by Bryn Haworth, Liberation Suite, Sheila Walsh, Larry Norman and others. However, financial problems had led to owner Rob Andrews pulling right back and Chapel Lane was by then operating as a studio for hire offering opportunities for grassroots Christian musicians to make a recording. So 'Love Is' was recorded and released on cassette in 1987. Explained Malcolm, "There were a few reviews in magazines but to be honest it was sold locally to friends and family and if I was doing any live events, typically they would be in churches in different parts of the country. I think I would only have sold about a few hundred at the most, so from a financial point of view, I wouldn't have broken even on it. But that wasn't the purpose. I also had a reasonable understanding of the quality of my own abilities or songwriting. Whilst I was personally thrilled to see the songs recorded, I didn't really have any hopes of becoming a financial success or making a career out of music. My original commitment was that it would be a hobby. It doesn't mean that I didn't put my best effort into it, even now, in anything to do with music, I put my very best effort into it and make it as professional as possible."

It was to be a further five years before Malcolm released another cassette album. He explained how his 'Heartbeat' project came about. "Most of the songs on 'Heartbeat' apart from 'Holy Spirit' were all new compositions from the mid-'80s through to the early '90s and I recorded them myself at home on a four-track deck. I used a keyboard and guitar and so on and it's entirely myself in my study where we were living near Evesham so I had a master tape of those tracks. Two of the tracks on 'Heartbeat' were recorded at Chapel Lane. The reason for that was because there was a competition for more songs of a missionary nature to encourage Christians to think about going into missionary service, because it was identified that there was a lack of songs in that area. I wrote three songs and I went over to Chapel Lane and we made demos of two of them. They were submitted and didn't get anywhere. So I incorporated those tracks into the 'Heartbeat' album. But apart from those two, the others were recorded at home.

"I recognised that the style of songs that I had been writing, whilst valid in themselves, they would tend just to be performance songs or solo songs, and what was needed was more of what we would today call worship songs. So 'Heartbeat' was an attempt, on my part, to write more in that genre of songs."

'Heartbeat' was, more or less, Malcolm's last effort in putting his music before the public though in 1994 his day job and his musical abilities unexpectedly coincided. He explained, "In 1994 my job involved seed for wheat and so on with a company called Uniroyal Chemical Co. The purpose was to promote particular treatment of seed to protect it from rotting in the ground and I had the idea of making a promotional video. Because the company was American I wrote a country and western song, 'Reap What You Sow', to help to promote the product globally. The name of the company and product is at the end of the video but the actual music stands on its own. From my point of view, it's talking about reaping what you sow, which is of course a Scriptural message, but can also be applied to the physical realm. The video was quite widely used by the company and in various meetings and seminars and on websites. An American wrote the music and performed it so that it would be more authentic, but the words were mine. It was a year or so after my father died and it was thinking of him that the idea came together for this particular song."

Today, Malcolm is happy to serve God as part of his local church worship team. His current worship favourites are Matt Redman's "10,000 Reasons (Bless The Lord)" and Lenny Leblanc and Paul Baloche's "Above All". For his own material Malcolm isn't sure whether the unexpected accolades he's received about making a "folk psych classic" will spur him into new composing. He admitted, "I haven't written songs for quite a while now. I was writing through the '60s and '70s, a little bit in the '80s and to be honest, not a great deal since. The worship songs today are of a different style to what I grew up with and I recognise that and I think I wasn't very happy with my early attempts. But I haven't forgotten that I have written songs in the past. So it's really a matter of prayer and the leading of the Lord. But I would like to write again if that's what the Lord has in mind."