Matt Jones: From the home of a human 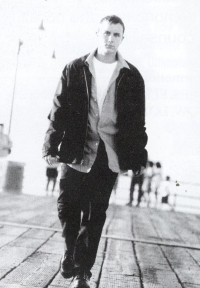 How does a 26 year old singer/songwriter from Destin, Florida develop his songwriting craft? The answer is start early. Matt Jones began at age 12 when he borrowed his brother's guitar. Four years later he was writing his own material and it was evident, even at that early stage, that Matt Jones was making music that mattered. "By that time I was performing in my church's worship band," he recounts. "It was a great learning experience for me because there was such a high quality of musicianship within the group. But, when I started stepping up to the mic with my own songs, I wasn't exactly sure where I fitted in. I knew I wanted to touch people with my music, but not at the cost of compromising my point of view. I didn't want to be a cookie-cutter version of everyone else out there, but I knew that if I was really going to be serious, I'd have to make a serious commitment."

That commitment came in 1994 when Jones relocated to the bustling music scene in nearby Gainesville, performing in area clubs and bars as he continued to hone his craft. Fronting a band called Odd Posture, he earned a dedicated local following over the course of the next two years. But it was as a solo artist that his real musical destiny seemed to lay and, with the encouragement of his former band mates, he returned to his hometown, even resuming his worship band role while plans for a debut solo album slowly began taking shape.

Released in late 1997, the independent album 'Friend Or Shadow' served notice that an impressive new talent in contemporary Christian music had arrived. Matt's second album, 'Journal From The Home Of A Human', was over a year in the making. It showcases 11 new tracks from an artist whose extraordinary musical abilities have kept pace with his dedication and determination to point the way and speak the truth to real people, living in the real world. It highlights such potent and persuasive cuts as the evocative "Clouds", the wry "Charge Of The Sparrow" and the haunting "Take My Arms (Let Me Go)", a cinematic story-in-song that encapsulates the life changing events that took place during his sojourn in Mexico.

Matt speaks about his songwriting approach: "Everyone has a story; everyone is shaped by events in their lives, which make them who they are. I love being able to share my story with people who understand... there's a great comfort in being understood. There's also a great comfort for the listener when they can relate with a song - it gives them a sense of ownership with your music."

Does Matt have a sense of ministry in the music he makes? "I know that there is music that brings me closer to God... and there's music that doesn't. On every album I've always prayed that the songs would bring people closer to God."