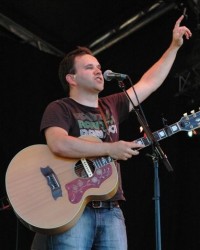 It's always a thrilling phenomenon for followers of Christian music to see one of "theirs" break through into the British pop charts. And so the achievement of Matt & Beth Redman and LZ7 to secure a bona fide hit single with their "Twenty Seven Million" will be an encouragement not only to the London worship songsmiths and the Manchester urban gospel evangelists but to all those who want to see truth and justice rather than lies and selfishness flowing from Britain's airwaves. But of course it's the message of the "Twenty Seven Million" song which makes the song's expanding popularity hugely important. "Twenty Seven Million" tackles one of the most appalling scourges to blight our modern world. The curse of human trafficking and the countless men, women and children whose lives are utterly ruined by its cancerous growth is the subject matter of "Twenty Seven Million". Matt's wife and songwriting partner Beth Redman spoke of the moment she was told about the problem of human trafficking. She was at a conference talking with Christine Caine (founder of the A21 Campaign). "She told me that today an estimated 27 million people are trapped as modern day slaves, and how, of those millions, they think only one to two per cent are rescued. I don't know how I'd missed it, and I had no idea that it involved adults, teenagers, kids and even babies. So the mum, the daughter, the sister in me said, 'That's it - I'm going to do everything I can.'"

Beth decided to gather together some musician friends to write a song that would inspire people to act. Said Beth, "Every movement needs an anthem and my hope is that this single will help people to pray, to give money or time. The ultimate dream is if everyone does something that figure of 27 million could be eradicated in our lifetime." Written by Matt and Beth, along with another husband and wife Lindz and Lucy West of LZ7 and Willie Weeks and Jorge Mhondera, "Twenty Seven Million" tells the true story of a girl trafficked from Eastern Europe into London's sex trade.

On the single Lindz delivers the stunning rap, "Trapped in the night, trafficked and beaten/All a part of an evil economy/Nothing more than someone's commodity. . . She's numb, she's dead from the inside out/Her heart is screaming but you don't hear the shout." Then comes a surging chorus sung by Matt that is a truly inspiring call for nations not to avert their eyes from the desperate plight of that sex trade victim and the millions like her. "We got to rise up/Open our eyes up/Be her voice, be her freedom, come on stand up."

The single has received enthusiastic reviews. America's Jono Davies wrote, "It makes you realise 'Twenty Seven Million' isn't just a number, it's 27 million real people with the same feelings as everybody else. . . All together this mix of hip-hop groove with anthemic rock passion makes for a truly great song." Even poet, author and Greenbelt speaker Steve Stockman wrote enthusiastically about the project, "Those who know me know that I have been a cynical critic of the modern worship music industry and the shameless commercial gimmicks to get Jesus to number one in the charts. Well, here is a brilliant use of those two things. A song birthed in the modern worship industry with a clear agenda to make a noise for a great Kingdom-bringing cause. 'Twenty Seven Million' takes up the fight that Christians have powerfully battled for some time; the sex slave trade. It is hard to believe that there are more slaves now than at any other time in history but that is indeed the truth. It would shock us all to know how close to where we live that slavery is happening. Redman and LZ7 do a great anthemic job at sharing the information and calling the Church to get involved. May it indeed get to number one, not so that Jesus becomes any more credible (he doesn't need the pop charts!) but that Christ's Kingdom shakes the foundations of the principalities and powers that be." 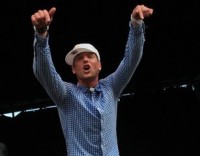 The timing of the release of the single could hardly have been better. Commented Lindz West, "It's such a 'now' issue with the Olympics coming up and with Gavin Shuker talking about it in the All Party Parliamentary Group on Prostitution. We didn't write it particularly to put it out at such a time but God's got his ways of working things, hasn't he. We wrote this months back and with the two genres coming together under the same heart I think it really works. Musically, Matt and I are poles apart, but here unite under the same thing to actually see something happen. Maybe it will awaken the whole Church. I really hope it does."

Hearteningly, "Twenty Seven Million" is bringing in support from many different quarters. Matt Redman told Cross Rhythms, "We have connected with a couple of prominent MPs in this area through the 'Twenty Seven Million' song. Gavin Shuker MP who is the chair of the All Party Parliamentary Group on Prostitution and Peter Bone MP who is the chair of the All Party Parliamentary Group on Human Trafficking have both leant their support. And even though we're working closely with a specific charity, lots of others working in the human trafficking field (Stop The Traffik, Not For Sale, Hope For Justice, International Justice Mission) are getting behind the song. There's already a lot going on but there's a lot to do. One of the things about this single has been trying to raise awareness, trying to get the general public to think about what's happening, to be aware of this incredibly disturbing problem, that they say there are 27 million slaves on the earth today. Gavin Shuker MP has endorsed the song saying it's often this public awareness that drives policy, drives social change so we're hoping this song might give some momentum to the cause generally."

The single has been promoted at the Twenty Seven Million Tour which recently visited Belfast, Manchester, London and Peterborough. As well as Matt and LZ7 performing, the event also featured Beth Redman speaking about modern day slavery and introduced Joe Public to the work of A21 Campaign.

That campaign is a cutting edge ministry who opened their first shelter for victims of human trafficking in Greece at the end of 2008. Now a transition home in Kiev, Ukraine, has been opened. Said an A21 Campaign spokesperson, "As the Ukraine is a source country for many victims trafficked to Greece, the expansion of work in the Ukraine will increase our ability to strategically help both at-risk persons, and those who have already been trafficked. In addition to our Kiev transition home, we have already been able to help several trafficked victims, including the provision of much needed medical assistance. We have also begun a school programme, educating at-risk students about the dangers of human trafficking and how to identify false job opportunities. We do not claim to be the 'experts' and recognise that our fight for justice has only just begun, but the A21 Campaign rings true through the famous words of Margaret Mead, "Never doubt that a small group of thoughtful, committed people can change the world. Indeed, it is the only thing that ever has.' The A21 Campaign stands for abolishing injustice in the 21st century. Anyone can join. Everyone can make a difference." 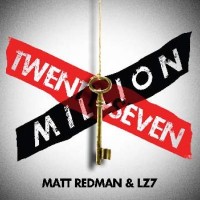 All the money raised from sales of the single is going to the A21 Campaign. Commented Lindz, "A21 tweeted a few days ago that four guys who have been trafficking in Manila have been prosecuted, which is amazing. A21 release people from slavery, they give them their lives back, they put people back in society and they also prosecute human trafficking rings. The Campaign is physically saving lives. You've got girls who are shipped into Eastern Europe and they're there for sexual servitude and they'll be seeing up to 40 or 50 men a day. They are trapped, they don't have a voice. Hopefully this single is a voice for people like that who aren't able to speak for themselves."

For the thousands of music fans who have so far downloaded "Twenty Seven Million". Lindz has a special message. "I'd love them to go to www.thea21campaign.org, there are 21 ways on there where you can practically help. For example you can send a letter to your MP. I got a text off my goddaughter last night saying 'could you come to my school and do this song, I'm going to get a petition signed by all the churches and the kids in my school and I'm going to send it to my MP.' And she's nine! I'm like, 'Wow, that's amazing, good girl.' There's 21 ways to help on the website. So go check it out."

I came across this song as I am a great fan of Matt redman.when I realized what the song was about ,I started to look into human trafficking and it shocked me that not only did exists today, but how some people Don`Don`t want to talk about it.but how a person can treat another person as a being a nobody.so I made it a discussion to tell as many people as I could praying that they would do the same.to put an end to this horrible crime.it has to start somewhere and I pray it is now and to make people aware that it could Dr happening on there door step.