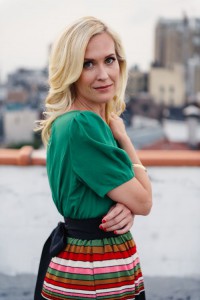 The news that New York-based singer/songwriter Melanie Penn is kicking off her Christmas tour this year with dates in Scotland will delight music buffs north of the border who've picked up on the songwriter's Cross Rhythms radio hits "Patterns", "Before A Fall" and "Turnaround". Most of the songs she will be performing first appeared on her 'Immanuel' Christmas album released in 2017. Tying in with the tour, the singer/songwriter has now released stripped down bluegrass flavoured versions of some of those songs for an 'Immanuel: The Folk Sessions' EP. The project demonstrates that those with sufficient songwriting skill to convey the staggering events of the incarnation rather than roasting chestnuts and a bearded gift-giver create the best Christmas songs. I spoke to Melanie about her approach to Christmas music.

Tony: I suspect that the released of the 'Immanuel' album wasn't simply a commercial decision.

Melanie: Oh, no. 'Immanuel' is all original songs from the Christmas story. I knew that I wasn't putting out an album that was exactly like you said, your typical medley of Christmas carols and kind of holiday hits. And you're right; a lot of artists do that and one reason is it is so intimidating to try and write Christmas songs. It feels very overwhelming to try and take on the themes around Christmas, whether you're coming at it from a faith-based worldview or not. So when I started writing 'Immanuel' I was so surprised that the songs coming to me felt very inspired by God. I didn't expect to write Christmas songs; I didn't ask to write Christmas songs. They just kind of happened and I felt I owed it to them to record them and share them with other people. So 'Immanuel' was a gift to me and I hope I can keep the gift moving forward into the souls of others.

Tony: By the time you recorded 'Immanuel' you'd already done some recording and had Cross Rhythms radio hits with the 'Hope Tonight' album. I have a stereotype in my head; typical singer/songwriter playing mainly acoustic guitar and mainly in coffee houses and scratching a living that way. Does that in any way describe you?

Melanie: I think so, probably. Cos that's what you do until things start to catch on. It's kind of what you have to do until there are more people tracking your career and listening to the songs and loving them. I have been playing venues on the lower East Side of Manhattan for many, many years. Little by little I think the word is getting out there. I travel a lot more and I can see growth. And it takes time.

Tony: Are the kind of places you play secular venues? I don't really like that word. Or are you playing in churches as well?

Melanie: That is such a good question; I do both. I would say I'm probably most at home where I started doing shows in the first place which is in New York, in clubs. I'll sing a song in a club that comes from my Christian faith that I wrote from my Christian perspective and what I love doing the most is setting up the song and not knowing who's out there. Is there someone who wandered in off the street and has no concept of what faith is? And no concept of what Christianity is? And I have to set the song up for that person as well as the long time fan who maybe came to my music because they are a Christian. So being able to present the song to someone from any background and hope that it uplifts them is my mission in life. I just can't get enough of doing that and New York is a good place for it.

Melanie: I'm not in that Santa Claus place at all. I'm not singing about that at all. I am presenting the real Christmas story, which is Christ's birth. I don't mix in songs about Santa or snow. The way I see that is there are a lot of artists who are doing that and those songs about Santa Claus are going to go everywhere. Those songs don't need any help. But if I can at all bring the story of Christ's birth to someone who might not think it's true, if I can do that through these songs that's awesome, wonderful.

Tony: But the thing is we've now moved into what some historians are calling a post-Christian culture. There are millions of people growing up who are celebrating Christmas who say very positive things about how they love Christmas et cetera but they haven't got any grasp at all. They might remember a few little fragments about a baby being born in a stable but they haven't really got any idea of the enormity of what happened in that land on that particular day, have they?

Tony: What do they mean by that?

Melanie: I might be wrong here because there are scholars who give names to eras of history but I think it means we're now in an era where people actually might believe in the resurrection and believe that Jesus is who he said he was, but they don't care. They don't feel that it impacts their life. Then of course you have areas of the world where people don't have any knowledge of the Bible at all, or haven't heard about Christ. I know what I observe in the States, and in New York in particular.

Tony: Let me ask you this: when did you make the decision to do a stripped down version of some of the 'Immanuel' songs in more of a bluegrass style?