Michael Farren: Out of pain and doubt emerges the 'Fighting For Us' album 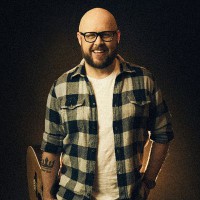 He is also the worship pastor for Gateway Church in Franklin, Tennessee, and the former frontman for the worship band Pocket Full Of Rocks. But two years ago, this son and grandson of Baptist preachers found himself in the middle of the darkest season of his life and he began writing songs, deeply personal, Americana-tinged modern hymns and laments. Deep disappointments, family struggles and a feeling as though the God he'd always served had abandoned him came to a head. It was during this period of God's silence that Farren met with fellow songwriter Krissy Nordhoff for a song-writing session. Rather than the song he'd planned on penning that day, Farren says "Fighting For Us" just "fell out as we wept."

The resulting album, 'Fighting For Us', is Farren's first solo album and available globally through Integrity Music on 5th October. Produced by fellow songwriter Hank Bentley ("Tremble"/"First"), the project delivers 11 songs woven around themes of belonging and identity, including the title track of which Farren says, "I've never needed a song more."

At times raw and often confessional, each song on 'Fighting For Us' holds special meaning for Farren. From the opening declaration "I Belong To Jesus (Oh Hallelujah)" and modern hymn "Oh Praise (The Only One)" to the bluesy radio single "Prisoners" and call-and-response of "Where Is God?", each song reflects Farren's walk through and out of the fire. Adding the perfect benediction to the project is the simple, quiet promise found in "Loved And Know". The lyrics go, "Every heart that has run away/Has doubted the distance that Your love would go/But every heart finds out the same/We've always been loved and known."

"I'm a pretty solid guy, been around church my whole life," said Farren. "And yet I am shocked that I have asked some of the questions that I've asked of God in the last couple of years. Things I would never have imagined that I would have wrestled with. And that is kind of the whole point of all of this. . . of this album, of these songs. It is giving people permission to ask the hard questions."

As the psalmists before him, Farren has come to recognise the profound value of lament. "Lament in the truest sense, in the safety of a holy place, with safe people, allows you to grieve," explained Farren. "You can lament, wrestle, kick and scream. And then you walk out of it. . . true, holy lament will always reorient you to the one who can give life and hope and peace, the one who rewrites our hearts."