After leaving Stryper in 1991, frontman MICHAEL SWEET tried a spell in the CCM world. But it's taken a deep work of God to bring the singer a new creative and spiritual maturity. Tony Cummings and Alex Figgis interviewed Michael.

Michael Sweet is considered by some music connoisseurs to possess one of the GREAT voices of rock, a breathtaking musical instrument which can soar to the heaven lies with the octave range beyond many females, and bring passion and dynamics over crunching power chords or delicate acoustics. After he left Stryper in 1991 things went quiet until two excellent solo albums for Christian label Benson, 'Michael Sweet' in 1994 and 'Real' in 1995. But then Michael seemed to again disappear until his return in 1998 with a creative tour de force Truth', released independently. Michael spoke to us at the Meltdown teach-in in Oswestry.

Tony: For most fans it was the 'Yellow And Black Attack' which was the beginning of the Stryper story. How did you get signed to Enigma Records?

Michael: "They were a small independent label in California; that's where God wanted us to go. We took a demo to them and signed a contract we felt really good about; we prayed about it, had peace [and knew] it was where we were supposed to be. They were a very small company in a little garage themselves; we not only saw the Lord bless Stryper, but the company as well. That may sound strange 'cause they weren't a Christian company, but God's hand was moving upon that company and many people there gave their lives to Christ. Because God was blessing the company, they wound up just going up up up, as well as moving to a larger building, then moving to [an even] larger building, hiring more staff, locking into place distribution with Capital Records - Orsema, I believe it was - world wide. It was very interesting because, only God knows the answer to this, tying in with that, when Stryper began to wander and stray, I felt that to a degree (even though the label wasn't run as a Christian label), they began to sign really dark stuff; and they began to crumble. Right up until 'Against The Law' [came out] - when Stryper was going through our point of just not staying true to what we always said we were - [Enigma] went bankrupt and fell apart. At the same time."

Tony: There was a renowned gig that Stryper played in Canada when many thousands made commitments to Christ.

Michael: "We had a few times when it happened like that. It can't be explained; it's just an incredible out pouring of the Spirit to the point where chills came over my body and almost to the point of shaking and not knowing what to say. I didn't know what was going on. The Lord moved upon us as we spoke to the crowd; that night thousands of people came to the Lord. Same thing happened in California as well. You leave the venue so high off the ground, not puffed up or anything, just flowing. You can't believe what you've just witnessed and what you were a part of; you hope the next night's going to be the same. Unfortunately it only happened a few times, but still many people did come to the Lord each night; but when you see it in multitudes like that, you can't describe it. It's amazing!"

Tony: But Isn't it strange that around this time these things are happening to you, there are churches and Christians denouncing you; much in the same way that currently at the moment in Pensacola, Florida, there is a church where revival is occurring. They preach the Gospel six times a week and people are getting saved by the thousands, probably hundreds of thousands now; yet they're being denounced.

Michael: "I know. Not to be pessimistic or bring people down or anything, I think [that] because there is so much going on in the world that is against Christ and against Christianity, it's never going to be complete; well I shouldn't say never - never say never - but boy, wouldn't it be incredible to see that world-wide? I don't think anyone's ever seen that in all of time, but it could happen. We need people who are truly committed, who are just fired up in a way that their lives [cause] people [to] say, 'What do you have that I don't?' We're going to see [revival] spread worldwide. The problem is there are too many Christians out there that are not truly committed. They say all the fancy words and speak the talk but they don't walk the walk; and that's a big problem. So we need to pray for all the Christians that are doing something wrong."

Tony: During the 'Against The Law' era, you gave an interview or two where you seemed very embittered with the attitude of the Church. Can you tell me a little bit about that?

Michael: "Sure. We were all that way; very bitter with the Church; for years so many people in the Church had come against Stryper and would come to shows with bull-horns, [telling] people not to go in [claiming] that we were the Devil. Jimmy Swaggart was one of many who would hold up our records on stage and say, 'Don't support this band.' We couldn't understand why the Church would not support us and pray for us, but rather tear us apart and turn our brothers and sisters against us; we couldn't understand that and it turned into anger [and] we started having just a really bitter attitude towards many people in the Church and the Church [itself]. It was amazing to the point that when we were asked questions about the Church, we would get all, 'Oh yeah! Let me tell you. . .!' type of an attitude; which carried on and grew to a peak during [the] 'Against The Law' [period]. I have come to the realization now a-days that the people who came against us in the past [are] flesh and blood like I am; they're sinners and I need to love them. I need to love people that come against me. It's difficult but that's what I need to do; and pray for them if they don't understand what I'm about. Once I explain to them, that's OK; at least I try to explain myself, but I cannot ever react the way I reacted before, which was with a bitter heart and with anger. That's sinful. I'm not saying that anger is sinful but just the way we reacted. [The anger] consumed us; it caused us ' to stumble and to turn to sin in our own lives, so it was definitely very wrong. But it was a learning experience, so good did come from it.'

"It's one of those situations where the Lord does tend to allow us to go so far and then causes situations to come in upon us, and if necessary crush us. "'Cause he loves us! He loves us so much and I thank God that the Lord did what he did in my life. I went through a dry period where I was just wandering in the desert for three years pretty much." 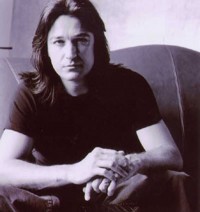 Michael: "Well, I think God has broken me. I came to the realization over the last three years that I'm absolutely nobody. When you think you're somebody because you're in a popular group like Stryper, everything comes so easily. Then you go through a stage where nothing comes to you at all and you can't (even) get arrested. It makes you realise that you are absolutely nothing. We are only something because we believe in Christ and we have Christ in our hearts. So the last few years have been an incredibly humbling experience. My prayers are that if I ever get puffed up, or think I'm anybody ever again, God would do the same; he would take it all away."

Tony: Now it's right to say that you are an artist, in so far as you're a singer and guitarist. God has given you those gifts. How do you actually hold the tension between having the gift but learning to use it wisely?

Michael: "Well I don't really have a theory on that, believe it or not; I'm just speaking for myself. I have through the years always tried to lift everything I do up to the Lord in prayer and offer it unto him before I step on any stage; before I pick up any guitar; before I write any song and record any track. Most of the time it's worked. The times it hasn't worked were the times when I wasn't sincere about it. I'm sure it's different with everybody, but I don't have a certain list to follow or anything except to let God lead; and pray that God would fill me, speak through me, play through me and sing through me."

Tony: So would you say that in the ministry God has given you, the responsibility is for you to preach the Gospel through your life-style?

Michael: "Yes, absolutely! For the last three years I haven't been doing music. Three years is a good little chunk of my life; I've been doing worship music, but haven't done music on the scale that I was before. I get so much out of worship and the last three years have blessed me incredibly and opened my eyes to knowing that, from now on, when I do perform Michael Sweet or Stryper songs, [I'll] worship God through the songs. I never really did that before with Stryper. We would tell people about God, but to actually worship him as you're playing the songs is so much more powerful, so far as what God can do through you."

Tony: How can fans get the 'Truth' album?

Michael: "I released it independently. It's available through the internet from www.michaelsweet.com There's no distribution right now."

Tony: What should we be praying for you and your dear family?

Michael: "Well for my family, strength; there are going to be times when we are apart, although I'm going to see to it that we are not apart as much as we were in the past. Sometimes we'd be apart for two or three months at a time. It's not going to be that way again, but we will be apart at times; so just strength to get through [as] it's very tough for a family to be apart for two or three days. Then strength for me, to be strong in the Lord and continue to take on the full armour so that I can go out there and not fail, stumble and fall. If things do explode and if doors are opened at that sort of Stryper level, I fear getting caught up in all the garbage. It's a scary thing 'cause it happens and you don't even realise that it's happening. I would have people pray for strength for me to continue staying true and humble, no matter how big it may get; that I am just as humble as I can possibly be."