The man behind the Family Worship ministry, MIKE BURN was quizzed by Tony Cummings 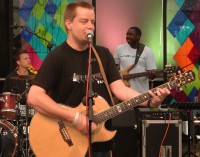 Tony: Could you give me a potted biography prior to you starting the Family Worship ministry?

Mike: I was converted as a teenager, thanks to a praying grandmother, and a sister who was already a Christian who invited me to her youth group, which seemed a good place to meet girls. Instead I met God.and later my wife Sue. After a few years in a Baptist church, which went through a classic early '80s traditional vs contemporary/conservative vs charismatic split, we joined Ichthus Christian Fellowship, which was then at the height of its church planting boom, and we joined a new congregation in Beckenham, south London in 1985. I was already a musician, having learned piano from an early age, and then got into folk/rock guitar as a teenager, largely through a school teacher (incidentally an Olympic gold medallist from the 1976 Montreal pentathlon team, but that's irrelevant!) who gave me my first guitar lessons and inspired a love for live music and song writing.

At Ichthus, I enjoyed the contemporary style of worship and as a guitar-playing singer/songwriter, slipped quickly into the style of worship leading pioneered in those days by people like Noel Richards, Dave Bilborough and Graham Kendrick (who had joined Ichthus a few months before us). I worked with Graham as his rehearsal pianist for albums like 'Shine Jesus Shine' and played live with him regularly, which gave me a solid grounding in worship leading and the inspiration to try to write songs that would help others to meet with God in worship.

Tony: What is the Family Worship vision and how did it get started?

Mike: The vision could be summarised as aiming to help the whole Church to worship together. We try to encourage a "style" of worship, and of all-age church services, which involve and include absolutely everybody in the church, regardless of age or personal preference. Malachi 4:6 has been key to the vision - that "fathers' hearts should be turned to their children, and the hearts of the children to their fathers." In other words, unity between the generations is as important as unity between nations and denominations, if we want to see the "day of the Lord" that Malachi promises.

In 1993, when Ichthus planted a new congregation out of Beckenham into Downham, a large sprawling housing estate where south-east London meets Kent, we were invited to be part of the leadership team there. There were huge numbers of children on the estate, and as part of the initial church planting strategy, we ran kids' clubs and invited the children and their families to the new church, which proved to be very successful. We then discovered that many of the worship songs we were using did not always "cut it", especially with non-church kids and families. There were plenty of great "children's" worship songs, and plenty of great "adult" songs, but relatively few that would work well with adults and children together. So, the pastor asked me to try to write some new songs, to serve the needs of our local situation, and that would "blur the edges" between worship for kids and worship for adults. I did my best to write a batch of songs that would work with children and adults together, and invited some of the other songwriters around Ichthus at that time, people like Judy Bailey and Graeme Young, to contribute songs. As well as discovering that they went down well in our local churches, word spread and we were encouraged to record the songs, which we did, and the first FW album was followed by several more.

It has been very much a grassroots thing and we had no grand vision or strategy to develop the ministry or songs, but over the years it has grown steadily, largely through the Family Worship website, which we started in 1997. We decided to make all the songs available for free download - MP3s, sheet music and so on. (As an aside, that decision is one that I still believe in passionately and I try to convince our record company periodically that giving songs away free on the Internet actually helps our CD sales! Many people really appreciate the fact that a ministry makes resources freely available and so are more, not less, likely to also subsequently buy the CDs.)

One thing we quickly discovered was that "family worship" is an emotive term, which can be as off-putting for some people as it is positive for others. Singles, teenagers, childless couples, those who had difficult childhood experiences, etc can view family as a negative word. Part of the Family Worship vision is to redeem the term "family" and to use it to mean not just parents and kids, but the whole, true, family of God - all ages, all stages. We also discovered that many people, especially teenagers and young adults, do not enjoy "family worship" as practised in many churches and see it as being "just for the parents and kids", so we went out of our way to try to include contemporary style songs, and included a number by youth-oriented writers Ian Mizen and Andy Pressdee (of Brown Bear Music fame) to try to model a style of worship that genuinely included something for everyone.

I am driven by the need to keep the children and youth that we have in our churches, and to attract new ones - the statistics about how many have left the Church in our nation over the past decades are well known. It is my belief that family, or all-age, worship that is really done well, can be one of the ways of helping to keep children and youth, and whole families, actively engaged in church life, and lessen the chances of them voting with their feet.

Tony: What goes on at a Family Worship roadshow?

Mike: With the Roadshow, we visit churches with a team of adults, teenagers and children and take the whole of a Sunday morning service. We aim to model the kind of service that genuinely engages everyone present. Using songs, dance, drama, multimedia, video clips, and clear biblical teaching, we try to demonstrate that the "impossible dream" that many churches have - a Sunday morning service that absolutely everyone can enjoy, and meet with God in worship through - is not impossible after all. We've discovered that many churches try a monthly, or periodic, family service, where the children and youth stay in all the time, rather than go to separate groups, but find that whilst they may meet with some success in attracting parents and children to that service, the youth stay away because it is "too young" for them. Or, if the church tries to include the youth with some more contemporary elements, some of the older members of the congregation stay away because they miss the predictability of a "normal" service, and think that the family service is just for the younger generation.

Surely, if we are made in God's image, then there is something in God's image about all people of all ages, and only all together, as the body of Christ, do we fully reflect his image. Worship should all be about pleasing God anyway, rather than about our personal tastes and preferences, and it's my firm belief that a service that really includes "something for everyone" to help them engage in worship, will also bring pleasure to God. Like any father, I imagine he must enjoy it when the family are co-existing peacefully together, rather than squabbling about what music to listen to, or TV channel to watch!

Tony: What's the thinking behind 'Get Into The Word'? Don't kids (and plenty of adults!) find Bible reading really boring?

Mike: Great question - I agree that many adults, who haven't read the Bible much, imagine it to be boring - they may think of the Old Testament as a book of outdated rules, and the New Testament as just a nice story, but essentially irrelevant. For the vast majority of kids in the UK, I would actually say that they don't consider the Bible as boring, for the simple reason that they don't consider it at all. We live in a predominantly Bible-illiterate age and even in many churches, it is not given the place and prominence it deserves. So, 'Get Into The Word' contains some of the Scripture, "memory verse" type songs that you would expect, but also contains songs about the Bible and why it is a source of light and life to children and adults alike, because it reveals the truth of who God is and what he's done, and ultimately, the written word of God reveals Jesus, the Living Word.

As well as the songs, there is a second CD-Rom which contains some basic, clear teaching for children on what the Bible is, how it came to be written, how to read it, and how to apply it. It is my hope that a generation of children who have learned to appreciate a great story again, through Harry Potter and Lord Of The Rings, will also discover that the Bible contains the most amazing and exciting true stories of God's interaction with mankind. Boring? No way. Hey, there was a talking donkey in the Bible long before Shrek came along with the idea!