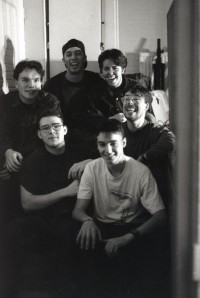 "Devon? None of our cars has ever been that far before." New Directions, a seven-person band from the small town of Kilsyth in Central Scotland, are delighted to be signed up for the Cross Rhythms SW festival. But they're not looking forward to a round-trip of almost 1,000 miles. "The van just seems to get smaller and smaller," laughs guitarist Danny Gallagher. Transport has become increasingly challenging in the last two years as the band have gigged the length and breadth of Scotland. Their brand of funky praise caught Tony Cummings' eye last September at Impact in Motherwell. They stood out in a line up which was largely grunge.

Broadly, their sound is "something with a wee bit of groove, rather than just four-four rock." It's still developing, but comparisons can be drawn with the Funky Beehive or the Spin Doctors. Ian Paget, who fronts the band, is also the chief songwriter, but the band enjoys leading "rocky praise" as well as playing their own songs. New Directions "took a long time to get round to being a band." Six years ago, they played at a Kilsyth church service, but only Paget remains from that original line up. Today Valerie Brown (to marry Paget this summer) and Lorna Blair share vocals. The most recent additions to the band, Kevin McPhee (bass) and divinity student Alisdair Morrow (drums), have brought New Directions a seasoning of Pearl Jam.

New Directions are working hard to make their name, and their material, known. Their best concerts have been in the town of Perth, where they were delighted to find that many in the audience already knew the songs. They even invited band members home for coffee after the concert. Mingling after gigs is something New Directions specialise in. "I hate when bands arrive in shades, come in through the back door, do their bit on stage and then leave again," says Danny. Evangelistic opportunities abound after a concert and there is a chance to collect honest feedback about their performance. "Sometimes you don't really get the feel of a concert until the end," Danny admits.

If Perth has been their easiest location so far, Macduff, a wind-blown fishing town on the Moray coast, has been one of the strangest. An old fish warehouse provided a draughty, not to mention aromatic, venue. "The wind blowing right through it didn't bode well for the PA," laughs Danny. But fans were not deterred by the smell of fish and filled the building to capacity.

At Spring Harvest at Ayr, New Directions provided the music for the Doubter's Ball, a social event for non-Christians. They have also played at a number of successful tent evangelistic events with zaney drama duo Rodd And Marco. Sharing the gospel is their primary aim, but it can be tough. "Still, if people start heckling you about your lyrics, at least they're listening," says Danny.

Their skills were honed on the Scripture Union circuit, where they would play at the end of a week of schools mission "to show the kids that there are Christian bands, it's not all about 'Kum-ba-yah'." Their funky sound has attracted a following of young teenagers and the band are well aware of the pressures this age group are under. Danny says, "People who go out drinking are getting younger and younger. Now they're drinking in their early teens. It's awful to see." New Directions' first recording was significant in fine-tuning the band's musical skills. The four-track 'Heavenly Touch' was made in one hectic week at Ken Smith's studio in Edinburgh in December 1993. Danny describes working to the demands of studio recording as "an eye-opener" and says it has changed permanently the way they arrange each song.

The band enjoy bringing a session of praise into a concert, adding a funky New Directions beat to the songs of Noel Richards. But not every audience will feel comfortable with praise, and whether or not to go ahead with it can require delicate judgment. "It's very difficult. We don't want to offend anybody," says Danny. "Sometimes you see somebody just sitting there by themselves and it really makes you think."

New Directions' praise is likely to prove uplifting and infinitely danceworthy. Catch them if you can... provided they don't get lost on the way.