Newsboys: The Australian pop rockers now based in the States

Cross Rhythms have gone on record to say the NEWSBOYS are the best band never to have played Britain. Jan Willem Vink spoke at length to the Australian pop rockers. 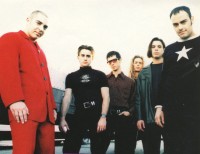 We are living in exciting times. The great misconception that contemporary Christian music is only a phenomenon of American culture is breaking down once and for all.

A creative fatigue in the American mainstream and a growing need for culturally relevant contemporary Christian music is slowly starting to affect the American world of CCM to look beyond the US of A for musical talent. The World Wide Message Tribe's victorious triumph in gaining a number one position in the American Christian CHR charts is a recent example of international acceptance. But so far the biggest and most surprising breakthrough has been achieved by Australia's Newsboys. The band, having now settled in the US, have now established themselves among the upper echelons of CCM popularity alongside Petra, White Heart and DC Talk. They are currently touring the United States on a gruelling 72-city tour with fellow CCM star Steven Curtis Chapman.

The Newsboys' most recent offering, 'Going Public', is an example of CCM at its best: lyrically expressing itself beyond stereotyped formulae and musically operating in a niche of its own. The Steve Taylor-produced band finds it really difficult to define themselves, but they easily admit they've come a long way. I discussed the current position of the Newsboys at the recent Flevo festival in Holland with Peter Furler, principal songwriter, drummer and singer for the band.

There is indeed an enormous stylistic variety in the Newsboys' earlier recordings such as 'Read All About It' and 'Hell Is For Wimps'. "In the early days when we were doing highschools in America, we were sure about style," comments Peter Furler. "We were writing songs for kids as an outreach. And it was at a time when Vanilla Ice was selling ten million copies and Metallica was selling ten million copies. So we'd go into a highschool to play. That would be like a pro-heavy metal type of highschool, and we'd play a heavy metal song for them. Then at another one there would be a rap crowd, so we brought out a rap song. In those days we wrote whatever. When it became time to do an album we had all different sounds. With 'Not Ashamed' and 'Going Public' we sort of just decided to write music that we liked. Not try to sell records but just to write music that we liked."

Serving as a bridge between those periods was 'Boyz Will Be Boyz', which never got released in Europe. "You're lucky," comments Peter. '"Boyz Will Be Boyz' was a big mess up. That was right in the middle of the whole mess."

Change was on the way. Explains Peter: "It was really just sitting down and drawing upon our influences and musicians and starting to write music that we liked to play. We came to realise we couldn't write lyrics really good. Then we had an opportunity to write with Steve Taylor and he was definitely one of our favourites, and still is the best lyricist in Christian music, - in any music. So we couldn't pass on that opportunity. At that time we were both looking for a producer and we ended up doing both the jobs."

It was the production combination of Peter Furler and Steve Taylor that made 'Not Ashamed' so successful. Peter comments that he had little experience in producing before that time. "I did various little things but this was the first real thing, that I concentrated on and put a lot of effort into. I did some stuff on 'Boyz Will be Boyz', but that was really because we didn't have a producer, that's all. It wasn't in 'I decided' terms, simply we didn't have a producer.

"I think 'Not Ashamed' was a cornerstone for the band," continues Peter. "It was an album that felt like a first album, like 'Going Public' doesn't feel like a 'Not Ashamed 2', but it feels like a continuity. It wasn't perfect on 'Not Ashamed' but it was a lot better than our earlier records, so that's really something that has come and has started to make us feel like a band. More so than just putting out records."

Peter Furler's growing interest in technology contributed in a big way to 'Not Ashamed', resulting in the pop, yet edgy sounds that dominate the album. Says Peter: "Right when 'Not Ashamed' came we were touring pretty heavily. So I bought a computer and I started working a lot with samples and loops and just a way of writing a European sounding music. It was the technology that gave me a new lease on my musical life. I enjoy playing drums, but I really enjoy keyboards and sounds. I really enjoy that sound of music."

Peter agrees that Steve Taylor's contribution is so vital, because creatively he is out in front of anything that is going on in Christian music. "Exactly, he is way ahead! I tell you, sometimes we have to pull him back. He'll get too far ahead! But he's very good, he's a genius. He's psycho too, he's the only guy that is jumping around the studio. Every time we make a record, he just dances around the studio, but also when he gets tired he can sleep when he's standing up. So he's really talented."

I asked Peter how vital Steve's role is in the future of the band. "Steve has definitely always expressed that he wants to continue working with us. He is a member of the band. He's a Newsboy. He's one of those guys you can call up any time and say: 'What do you think about this - we're going to do this and this?' He's like: 'Yeah, why don't you do it this way?' He's not somebody that sits down and writes lyrics. He doesn't just go away and say, 'Here's a lyric' All the subjects are subjects that we presented to him. He puts in all the good stuff."

Peter is especially proud of 'Going Public', which is another step forward for the band. "We've tried to develop the sound and still be organic, try to still be a band, instead of being computer music. On 'Going Public' we moved further in that way, got more real instruments happening."

Peter makes no secret of the fact that he prefers the poppier, less edgy songs on 'Going Public'. "I enjoy a certain style of song, just like 'Let It Rain', that's one of my favourites, and 'Elle G', probably my favourite. If I did 10 'Elle G's' then it probably wouldn't be a good record, but to put one on there makes it a little diamond. Maybe 'Going Public' is a little tamer than 'Not Ashamed' but it's more together.

Peter says the Newsboys have finally become a band. The band's current line up consists of Peter Furler (drums/lead vocals), John James (lead vocals), Duncan Phillips (keyboards), and Jody Davis (guitar). The bands latest addition is New Zealander Phil Urry, who has replaced Kevin Mills on bass. The band is supported on keyboards by Jeff Frankenstein (his real name) during their live performances.

For more on Newsboys visit the Newsboys artist profile