Mike Rimmer caught up with NEWSBOYS frontman Peter Furler in Holland and found the veteran pop rockers as passionate as ever. 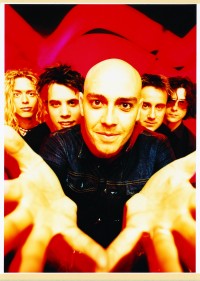 The Winter Wonder Rock Festival in Holland is in full swing in a huge barn of a hall. The PA system struggles to pump out enough noise to fill the place and consequently when the Newsboys hit the stage, they have to work hard to overcome the general mugginess. It's been 10 years since the band played Holland and despite American tours that have been high in gimmicks and pure entertainment, tonight it's the band, a few lights, an overextended PA and a crowd of Dutch fans happy to see them again.

Reflecting on the show Peter Furler's just played, he comments, "In America, we've always got these bells and whistles, these rotating drum rises, video screens, all sorts of stuff and tonight, it all just comes down to the music. Tonight was as much to see if the music itself can still speak as opposed to just the trickery, the smoke and the mirrors." Stripped down and looking like a band ready to unleash their new album, Thrive', the rawness of their live set somehow manages to match the edginess of the new album.

They'd bought themselves a bit of a break with the 'Shine' album, a "greatest hits" package that's allowed them to have some time out to do solo projects and finally they've checked out of the disco and returned to working with Steve Taylor. The result is an album that has a rockier feel and the band sound like they're enjoying another successful reinvention. Furler shares, "I think that one of the exciting things about the band is that we get tired of ourselves very easily! You reinvent yourself because you are sick of yourself! I feel really confident now because I believe we've recorded the most exciting and strongest album that we've ever recorded. It's just got the right amount of everything. Even when I hear it myself, it's probably the first record we've made where I like 80% of it."

Teaming up again with Steve Taylor will bring a smile to the faces of most Newsboys fans since most of the band's best loved songs were penned by Taylor. Furler comments about the new album, "It's got that satire and that cheek that's always in our blood. It's also in Steve Taylor's blood and he's very good at connecting it onto a sheet of paper. Musically, I think we've just got better as songwriters but it's a little bit more aggressive than what we've made in the past but it's not way out of character, it's not silly. It feels very honest though, a very, very honest record, lyrically." 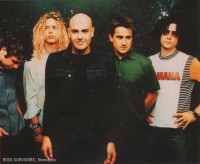 That honesty also translates into Furler's own life. Over the course of the conversation, it's clear that he hasn't wasted the band's time off but instead has deepened his relationship with God. He describes his life: "I've stayed in 10,000 hotel rooms... but I don't know how to check into one! I've been in a million rent-a-cars... but I don't know how to rent one! There are people on the road that look after you and they feed you and whatever. I just get handed a key and everything's looked after. It creates a very selfish, un-Christ like atmosphere. That's one of the circumstances where we should move away, in relation to the differences between mainstream rock and those of the faith. So it's like, when you get home and the phone rings, you pick it up and you think it's room service! That attitude carries over into every other part of your life. When you're married which I have been for nearly 11 years, all of a sudden, when you're meant to love your wife as Christ loved the Church, you can think you're the one that needs to be taken care of and things change. That's the greatest thing about marriage, that's what has really helped me. Just surrendering daily. I surrender to it with my wife and I do it unto the Lord. We all have struggles in all our relationships but now, by the grace of God, I just learn to keep surrendering as unto the Lord. He honours it, he really does honour it. That's what's changed everything."

Watching the band play live and the crowd respond, I propose that it's a difficult balance for modern Christian bands reconciling entertainment and ministry. Furler admits there's a struggle. "The great English writer Chesterson said 'What's wrong with the world...? Me!' So, I think it's something I've definitely struggled with probably in the last year or so. I've really struggled with being on stage and because you can manipulate a crowd. That's something I feel I can really do. I feel there's a gift there to have a crowd in your hands and make them do whatever you want them to do."

Peter hasn't always been that confident. He confesses that he was very nervous when he stepped from behind the drum kit and became the band's lead singer. "My first show was in Germany, which I did with my eyes closed! My wife came back and said, 'It was good but you should have opened your eyes at least once. You never saw Germany!'" Furler soon found himself enjoying the entertainment side of what he did. "It brought things out that made something grow inside of me that fed that selfish side and in the last year I've been working on trying to crush that. Which we all have to do, don't we?"

Lyrically, the album reflects some of the changes in Furler's heart, as he explains, "It's understanding the process of losing yourself more and being able to put that into writing better than before. I've always felt that there's this lie that goes around saying, 'Oh, you've only got one life to live. You've got to be happy.' A lot of times, that's what causes divorce and major strife because at what point do we stop trying to find our happiness? Does it mean that if I don't like you, I should kill you because that's going to make me happier? So there has to be some level. The kingdom we serve is an upside-down kingdom. So I've started looking at everything in reverse. The word that came to me was a word that has sneaked around our community and it comes in different forms. The word is 'thrive', which is the title of the record. Especially being in America, in the last year or so, it's a word that speaks of prosperity, blessing and a lot of the times it's very ironic because sometimes when we talk about losing ourselves and humility, those things, man!... that's really what thriving is about! It's not about having the cash in the bank, a car and a house, the wife, etc... and man, I was just miserable. Now I've realised that there is another side to this faith that I believe in and it wants less of me. That's what thriving is, as a seed falls to the ground and dies, then it bears fruit."

Furler is on a roll as he continues, "We forget that; we just always look at the bearing fruit but not what we've got to do to get to that. I think I've been able to put that onto paper a little more articulately than before. Maybe because we've understood it a little more. You look back and there are things that you've blown and what it's done is it's really made me understand the grace through Christ that we're righteous because of our faith, not because of anything that we've done. That's new to me every day. That mercy is new every day and it's also my fallenness that seems to be new every day! I guess that's why the mercy's there every day too! But greater is the mercy and grace where there's sin. Grace does abound greatly, there is more grace than there is sin. I believe that."

For more on Newsboys visit the Newsboys artist profile