Nightwatch are a part-time band of Belfast rock gospellers. James Attlee checks them out. 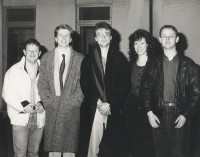 So much of what we hear through the media about Northern Ireland is cause for sadness. It's always good to hear of something positive happening at grassroots level.

Nightwatch are decidedly grassroots. Founded in 1985 the band have previously recorded demos, but last year a professionally made four song cassette called 'Stranger Than Fiction' showed that the band are very bit the musical equal of professional teams.

"We were at a concert, and I said to a friend of mine "hey, that would be a really good idea, to yet a band together" - which is probably the worst attitude you can start with! But after about a year, we were able to sort out a direction."

That direction has included playing live on average once a week, at evangelistic meetings, youth fellowships, schools and concerts all over Northern Ireland, and recording a number of tapes. Their basic motivation has been evangelistic.

"The original intention was that we'd go out and have this medium to spread the good news. As the songwriting has progressed, we're dealing with issues that require a bit more thought on the part of the listener."

Have the band tackled the thorny problems besetting their homeland?

"We do strongly believe that that the only real answer is a political one, but a spiritual one. You notice that the songs don't really deal with that subject specifically. But we've written a song recently, which does, and we decided it was about time we took our heads out of the sand and approached that particular problem. It's taboo for a lot of people. You'll either hear people saying the same things again and again, or they don't talk about it at all. What we try and do is encourage people to think about themselves. The answer starts with me rather than any political solution that people may dream up". Favourite track for me was 'Different Trains', a lament for love lost when the protagonist had his life changed around. There are times when I wonder how it might have been if only you had stayed /if only you had seen/and there are times when I still feel the pain/ of travelling on a different train!" The guitar solo is reminiscent of Steely Dan at their best.

'Stranger Than Fiction'. A bunch of musicians motivated not by fame and fortune, but by serving the Lord, doing what they do best.