Norman Hutchins: The gospel music star on how he was healed from blindness 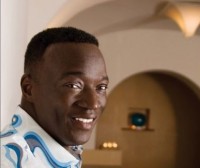 Pastor and gospel singer Norman Hutchins has had a string of successful albums in the US including 'Battlefield' (1999), 'Emmanuel' (2000), 'Nobody But You' (2002) and 'God Is Faithful' (2009). But it's been the singer's extraordinary testimony of healing from blindness that has brought the singer to national media attention. Recently Norman met up with journalist/broadcaster Mike Rimmer and told him about the unforgettable events that overcame the singer in 2006. "I was diagnosed several years ago with diabetes. My mother passed away with it, and my father and my brother passed away with it, and I have some sisters and brothers who have diabetes. When I was diagnosed, I just ignored it, just thought it would go away. And man, was I wrong. My vision started getting blurry; I went to the doctors and they told me I needed surgery because my retina was starting to detach.

"I went through surgery and it was successful. But the problem was that blood stuck to the macula and I started to develop cataracts, my blood vessels were bursting, they weren't healing - and when I woke up out of the surgery I was totally blind. For the first few minutes, not being able to see my wife or anybody, I didn't think I could survive, I just couldn't go on. The fear that I felt inside was like somebody jumping from behind a door and frightening me. That's what I felt like all day. But thank God for my wife, a praying woman, who kept me encouraged and she was right there with me. What happened was that I called a friend of mine from Houston in Texas, and shared with him what was going on and he said to me 'You're blind?' and I said 'Yes, I can't see.' Then he asked me 'Can you still minister? Can you still preach?' When he said that, man, it's kind of like I got upset with the Devil, but you know what, I thought 'I can'. So that's what I did, I went to church and started ministering and singing and preaching every Sunday. I did it for six months and in the sixth month, I was ministering a sermon and the title was 'This is not how my story ends'.

"The Lord spoke to me at the end of the sermon and said, 'Because of your faithfulness and because of the assignment that I have for your life, today will be the last day that anybody leads you down the aisle'. I told the congregation. I thought the miracle was going to happen on Monday, but it didn't happen, nor on Tuesday, Wednesday, Thursday, up until Friday, still no vision. So I had a talk with God. I said, 'Now, you told me that last Sunday was the last day, and now today is Saturday and tomorrow's Sunday, and I've told the people', and so on. I went to bed and quoted a song that I wrote, 'If God said it, that settles it and that's good enough for me'. When I woke up on Sunday morning I had enough vision, and the first thing I saw was my wife. I had to get this close to her to see her, but I saw her. From a distance, everything else was just silhouette, just shadows. But I saw enough so that I could walk down that aisle by myself. And gradually, over a period of a month and a half or so, my vision started coming back, and God gave me a healing."

Norman spoke about how his healing has had a profound effect on his ministry. "The first thing it did was it allowed me to encounter God in a way that I've never known him before, because during that transition season I had to totally depend on God. I remember one morning I was in the studio and wondering, 'Well, God, are you ever going to give me my sight back?' and he began to minister to me: 'I'm going to give you your sight back in time, but there are some lessons you're going learn in the process'. One of the lessons he wanted me to learn was 'I don't care how gifted you are, how anointed you may be, you're no good to me spiritually if you do not take care of yourself physically. In love I'm chastening you'. And then he gave me a glimpse of glory - I'm telling you, the room got bright that morning, so bright that it frightened me. It felt like somebody was in the room. I said, 'God, what is this?' He said, 'I'm giving you a little glimpse of glory. And when I give you your sight back, don't forget this', and so it's taught me that 'faith cometh by hearing, and hearing by the word of God' - and the ability to hear God better than ever."

Musically, Hutchins belongs to an old school approach to gospel singing that reaches back to the gospel quartet sound of the 1950s. Although a relatively young man (Norman was born in 1964) his declamatory vocal style goes way back. Author Bil Carpenter put it succinctly in his book Uncloudy Days: The Gospel Music Encyclopedia: "In a time when most aspiring gospel artists are seeking to carbon copy the style and sounds of contemporary gospel performers such as Kirk Franklin and Mary Mary, Norman Hutchins is a throwback to the old style of traditional gospel music." 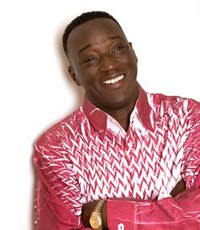 Hutchins became a youth minister at the age of eight and earned enough money - up to $100 a night - to support his mother and 11 siblings. After getting married at the age of 19, he spent four years as pastor of the New Hope Church Of God In Christ in Delaware, Pennsylvania. Then he felt led to move to Los Angeles where he held a series of menial jobs. It was in California that Norman got a break when ministering at a church. Unbeknown to Norman, gospel superstar Andrae Crouch was sitting in the back of the church. Remembered Hutchings, "When I went back to my seat, Andrae got up and passed me a card and said to give him a call. Man, I was just in heaven. I couldn't believe it. I grew up with Andrae's music. So I gave him a call and he invited me to his church and I ministered there; his father fell in love with me. Then I did a revival for them. His father built a church near Palm Springs, California - and actually I pastored that church for him for nearly two years."

In 1991 Norman sang on the Sparrow Records album 'Saints In Praise Vol 2' by the West Angeles COGIC Choir. The project reached number five on Billboard's Gospel chart. Shortly afterwards Sparrow offered Hutchins a solo recording contract. In 1992 Sparrow released Norman's 'The Vision' album. While a member at the West Angeles Church Of God In Christ in Los Angeles, Bishop Charles E Blake named Dr Hutchins (Norman has a doctorate in church administration and a masters in biblical counselling) the Executive Minister of Music for more than 250 churches. Dr Hutchins was also the Director of Social Services where he had the opportunity of ministering to more than 18,000 members.

The reality of his Social Services title was to serve the needy with food, clothing and shelter. He routinely exceeded his $12,000 a month budget "many times", he told YSB (Young Sisters and Brothers) magazine in 1994. "But you got a mother who walks in with seven children who've been sleeping under a bridge - you mean to tell me I'm supposed to go home to my wife and my three kids, feel good and go to sleep? I'm sorry. We've got to find a home for this family. Everybody wants to minister to people spiritually. They want to preach to you. They want to prophesy to you. But there's a time when people need natural ministry. 'My car needs fixing, my rent needs to be paid, food needs to be put on the table.' Things like that help people make it from point A to point B."

After Hutchins's third Sparrow album, 'Don't Stop Praying', failed to ignite, he was dropped from the label and went without a recording deal until he joined James Roberson's JDI Records in 1999. His debut album 'Battlefield' zoomed to number nine on Billboard's Gospel chart and sold well over 150,000 units. Ironically, the song that sold the album, "Battlefield", was recorded on his self-titled debut album for Sparrow but had been ignored until he rerecorded it for JDL. Norman followed with a Christmas project, 'Emmanuel', which leaped to number six on the Gospel chart. Hutchins continued his run with a 2002 release, 'Nobody But You', which reached number seven on the Gospel chart. That was followed by 2006's 'Where I Long To Be' and 2008's 'Spontaneous Praise Vol 1'.

Mike Rimmer concluded his interview with Norman by talking about the differences between white and black audiences. Norman told a telling story about a concert he once played in San Diego. "I walked out on stage and 90 per cent of the crowd was white. So I went into my song bank and thought, 'Well maybe I need to do this, and maybe I need to do that', thinking that it would please the crowd, because it was a white crowd. Everybody was just sitting there, looking, you know. I looked at my music director and said, 'Let's do "God's Got A Blessing" - you know, down home, traditional black, as black as black can be - and man, when I did that song, everybody was on their feet clapping their hands. And I learned a lesson, and that is, do what you do, just do what you do. That's all."

My son, Ty Anthony Smith made mention of you over the past few years. He would fly up from Atlanta to Dover to hear you preach and always left in a positive state. I applaud you for touching the lives of others in ways that you may not even be cognizant of. Keep up the Lord's work Bishop Hutchins! I look forward to meeting you in person on May 26th in Mobile, AL at Mt.Hebron Church (under the direction of Pastor Joe).

Great report, sometimes I wonder what bring out great artists to have such successful songs that touches souls of its listeners. This is one of them.
Thanks,

We have a TRULY AND AMAZING mighty god