Passion: A Roar of worship from the annual student conferences 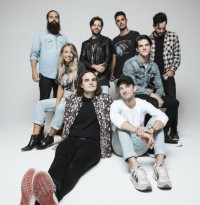 The release by sixstepsrecords/Capitol Music Group of the Passion album 'Roar: Live From Passion 2020', will highlight once again one of the most important events in the history of modern worship music. This particular album, to be issued physically on 3rd April, was recorded live on 31st December, 1st January and 2nd January at the Mercedes-Benz Stadium in Atlanta, Georgia. The Passion team ushered in the new decade with more than 65,000 in attendance from across the country and the globe, bringing together the largest crowd in Passion's event history for their annual conference.

The first Passion conference took place in Austin, Texas in January 1997. In 2008, Giglio announced the planting of Passion City Church in Atlanta, Georgia. In its early years, the Passion events were the launch pad of singer, songwriter and worship leader Chris Tomlin and, since then, numerous renowned worship leaders such as Crowder, Christy Nockels and Britain's Matt Redman have benefitted from the opportunity of presenting their songs to tens of thousands of students.

With 12 songs in all, the project features 10 from the conference with two additional live songs, "There's Nothing That Our God Can't Do" and "King Of Glory", both featuring the vocals of Kristian Stanfill. The energetic "King Of Glory" was a surprise single release to kick off Passion 2020 on New Year's Eve and "There's Nothing That Our God Can't Do" released in December and is already being sung in churches around the world while climbing multiple American worship charts.

The touring Passion unit is currently on the road in the States with the hugely popular Winter Jam 2020 and will visit such cities as Chicago, Cincinnati, Birmingham and Chattanooga. And when the album is released, it seems certain that 'Roar: Live From Passion 2020' will join the long list of best-selling Passion projects.

For more on Passion visit the Passion artist profile