Paul Russell: The rapper concerned that he may be throwing away his education

Tony Cummings reports on the rapper with the radio hits "Kalamazoo" and "Kimbo Slice", PAUL RUSSELL 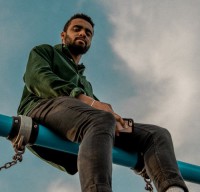 The latest rapper to make it to the Cross Rhythms playlist is Paul Russell. On 29th March last year, Kings Dream Entertainment released Paul's album 'Once In A Dry Season' and two tracks - "Kalamazoo" and "Kimbo Slice" - got the airplay nod. The rapper/singer began making music while at the renowned Cornell University in Ithaka, New York. Under the name Paulitics, he recorded two albums, 'Primary Colors' (2016) and 'Scarlet Love' (2017).

In 2017, he told journalist Lorenzo Benitez, "When I make music, half the time it's because I want to feel a certain mood. I'll make music as if I felt some sort of mood, and that puts me into it. I mean, sometimes there are themes I want to communicate, but I generally think it's either the mood I want to create that motivates me, or I'm walking home late at night and I start rapping to myself or singing to myself and say, 'Oh, that's cool, I like that'."

Russell's breakthrough really came when he was living in California and got a text from friend and rapper Ruslan, who asked him to come and stop by the studio. Russell told the Rapzilla website how he almost didn't show up because he already had plans to go to the beach with his girlfriend Megan but, urged by his girlfriend, he went, and that day Ruslan asked him to join Kings Dream Entertainment as an artist.

Paul wrote on the Rapzilla website about his radio hits. "In 'Kimbo Slice', I wanted to capitalise on shock value (the style - quick rapping over a gritty trap beat - is far from my usual sound) and introduce some of the ideas to be discussed throughout the project. As you'll hear, I briefly touch on my changing relationship with the idea of becoming a hip-hop artist. This journey of accepting the gifts God has given me and the call to use them is an undercurrent of the entire album, mentioned explicitly in songs like 'Good Things' and implicitly in songs like 'Renfro' and 'Feels Like A Dream'. The ending, where my sister talks about my childhood, was a surprise addition to the song that Ruslan threw in during the mixing and mastering phase. When I say surprise, I mean really a surprise. Before I heard the final track, I had no idea he'd ever spoken to my family. Sneaky."

Paul's other radio hit, "Kalamazoo", features rappers Jon Keith and TROSSTHEGIANT. Reflecting on the song's theme, he wrote, "I can realise my humanity. I can have joy, and I can talk about my uncertainty about the future all at the same time. Jon Keith and TROSSTHEGIANT came in to help me make the song as fun as possible. The video made it even better. It was filmed by Miguel Lugo with some help from Zach Sperazzo. Fun fact: I've never been to Kalamazoo."

Paul considers the song "Good Things" as the climax of 'Once In A Dry Season'. He wrote, "In the first verse, I'm worried about the difficulties that would arise even if my wildest dreams come true. If my music spread across the globe and made me rich, I'd struggle to stay connected to the average American and I'd have to raise privileged kids. This is a real fear, and a testament to the fact that no matter how much we think we'll stop worrying once we reach our goals, our propensity to worry has nothing to do with our situation. In the second verse, I bring up another worry: that by pursuing music I'm not actually following God's leading, but instead I'm throwing away my education and giving in to a stereotype because I don't want to work a job like everyone else. The final verse is God's response to my worries, reminding me he's in control. In many ways, this truth resolves the uneasiness brought up in the songs 'Osmun' and 'Renfro'. My dreams are blurry and life is difficult, but I can rest in knowing that it will all be resolved either on earth or in Heaven because God has a plan for my life and for humanity as a whole."