One of the most highly respected acoustic singer/songwriters is America's Peter Case. He was in the UK recently and was quizzed by Stefan Tobler. 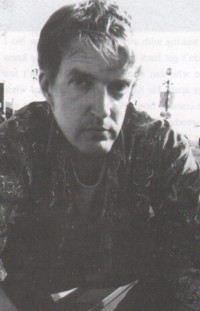 Peter Case's gigs might be renowned for mixing tears, humour and God-given poetry, but did anyone at the Borderline on February 19th expect a country ballad about the monkey NASA blasted into space?! The chorus of which Peter got the whole audience to sing: "Space monkey, space monkey/What you doin' up there?/lt's dark as a dungeon when you're up in the air."

He blows on a gob iron slung round his neck and under his boot the floorboards are snapping out the percussion. Between songs he puts his hand to his cocked head and the jokes and anecdotes flow. He plays plaintive old favourites, like "Entella Hotel" from his 'Blue Guitar' album, which anyone who saw him at Greenbelt '89 will no doubt have scrambled to buy. Most of the songs are off 'Full Service No Waiting', which was released in the UK in March. The top US music magazine Billboard has already enthused about the new album's "11 sharp songs in an acoustic/pop vein, hitting a just right balance of hooks and non-schmaltzy sentiment." The songs are more personal than before and, on the whole, more upbeat.

Sitting in his hotel bar on the morning of the gig, Peter chats contentedly enough, even when he's explaining, "there's no such thing as happiness outside of a moment. The pursuit of happiness is a joke - you can't pursue happiness, it's just all very transitory. If Peter's happy or not doesn't take care of anybody else, it's just a hungry mouth. Or am I going to leave my kids and go and do this, that and the other thing - that was the big 70s thing, like the Billy Joel song 'It's My Life'." Peter plays air piano as he hilariously imitates Billy Joel. "You remember that one? Don't tell me what to do, leave me alone, and all that kind of crap. I can see why people would feel that way but it doesn't necessarily lead anywhere. There is a certain amount of happiness and serenity that can come from just accepting certain punishing truths about life. And there are plenty of them! The acceptance of that seems like what Christianity is about to me. That seems like understanding, putting yourself into the chain of life..."

Peter Case left home at 18 for San Francisco and a hand-to-mouth existence learning his craft as a street musician. "I lived there for about five years and for the majority of that time I lived on the street... I had this thing that was kind of like Noah's Ark that we lived in for a while. I never considered that I'd have a career in music, even though that was all I did - play music! I come from a place called Buffalo, New York, and you can't get into the music industry from Buffalo." Peter hung round with other musicians though he ended up joining the short-lived band the Nerves, which toured with the Ramones. Then in 1980 with three others, Peter set up the Plimsouls. They achieved a fair amount of success with their powerpop before they disbanded in 1984. They have just released a brand new album after reforming on the back of writing a song for the Speed soundtrack.

Whilst still with the Plimsouls, Peter frequently found himself playing the country blues and traditional music he'd long loved. He'd heard it from his older, college-going sister's record collection and then learnt it during his San Franciscan years. "I was into Reverend Gary Davis, Mississippi John Hurt and a lot of bluegrass and stuff, and there were people playing that kind of music that you could meet around on the streets. As well as that it was a weird centre of beatnik and poetry and blues."

Peter started criss crossing America, playing as a solo acoustic performer in bars, coffeehouses and other watering holes. He still prefers to appear on his own. "If you don't keep a band together you create a wall between you and the audience of this anonymous paste. You're much better dispensing with it, in my case anyway. I can make a lot of noise solo." Luckily for anyone who missed him this time, Peter is planning a fuller European tour in the autumn.
Peter now lives in Los Angeles with his wife the writer, Diane Sherry and two youngest kids. "There's a strange feeling about LA. Everyone else is having snow and you fly into LA and all of a sudden you're in this garden of a place. But there are other things that happen there. Earthquakes, fires, floods, riots - those are the four seasons in LA. People really got together in that earthquake, got to know everyone pretty good."

I suggest that his music is so rooted in America that England must seem strange. He doesn't buy this though. "I think I have a deep connection with it. I think it's because of my family, the place I grew up. The first time we got off the plane, I remember thinking we'd landed in western New York state. It looks exactly like it. Basically the whole idea of New England is that it is New England. Musically I feel really connected to England in a number of ways. The ballad tradition comes from here, and certain other traditions. The whole kind of English visionary like William Blake, there's a whole strain of that that runs into America and has affected a lot of musicians.

"As you sing for a number of years, you start realising that you're going to the place the song is as you sing it. So as you're living that, night after night on the road, you start to realise that these songs are more real in many ways than where you are. You start to realise that there's this whole level of imagination that's always going on... It's really flowing, really vivid, it's a huge energy, and that's actually what you have to get into. And I think that William Blake's whole thing was like that. He was screaming at the start of the industrial age that we're abandoning a humanity by making people go to work 16 hour days, have half an hour for lunch. All this stuff that was good for the assembly line, killed the sense of eternity. They said William Blake was crazy because he was having visions, but a hundred years before everyone was having visions. In fact, during William Blake's time it was very common for people here in London, children were having visions all the time. But most of them would stop when they were 12 or 13. They'd go to the factory or to work as an apprentice, and get their ass kicked in one way or another. Not that life every didn't kick your ass...

"We've long abandoned what William Blake talked about. Now we've abandoned just being decent to people. People get shot in the US for two dollars at the gas pump." Not that Peter takes himself too seriously. He adds lazily, "When I was a kid in school everyone fought with chains and knives and stuff, really innocent back then. You know, they'd break a bottle and cut a guy up with it or something...but that was just a scar..." The conversation turns through dreams and music towards his beliefs. Peter is known to be a Christian, and yes, he says, he goes to church. "Drunkard's Harmony", a song on 'Full Service No Waiting', has a title that might upset a few people but the song is an exhilarating expression of seeing Jesus. I ask him about the title and he quotes...Blake, who said the road of excess leads to the palace of wisdom. He says he has quit alcohol but that he sees people use alcohol and drugs because they are searching spiritually.

"Yeah, I'm a Christian, man. It's just confusing now because there's so much bad press. In the States they ask you if that means you bomb abortion clinics...they think it's all about finger pointing, which is a really big misconception, which is sad." I wonder if there isn't some truth to the finger pointing charge, but for once Peter gets a little impatient and cuts me off. "Yeah, I don't find that confined to the Church. It's a secular aspect of the Church. I think that's the way the Church is like everybody else, where they haven't actually been transformed by Christ, that's the place they haven't been healed yet. The place where they're not like everybody else is where they learn forgiveness and where they try to talk about grace. The worst sin is to think you're God -the sing of judgment, that's what Jesus came to warn everybody about."

I'm sure that all the businessmen eating breakfast nearby are listening. "If you accept Christ, you're forgiven for your sins. Basically the idea is you're supposed to stop sinning, but you have to keep getting out of it, it's a whole other road. You're not instantly turned into...a little flower, you know what I mean? It just isn't like that!"