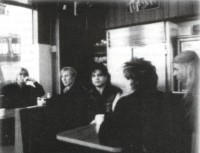 What keeps a band turning out Christian rock for 25 years? How do you maintain spiritual equilibrium when new band members only stay a year or so? John Schlitt, lead singer of Petra, whose new album 'God Fixation' is in the shops now, answered the hard questions.

Dave: Let's start by stepping back to the time before the latest 'Petra Praise' album and talk about the departures of Jim Cooper and David Lichens.
John: "After John Lawry and Bob Hartman left, we were looking for some young energy. Jim Cooper seemed to fit in. He had been a roadie for Petra and he knew the heart of the band. David Lichens looked the part and he sounded the part, and in try-outs it seemed that he could play the parts. Sometimes you make mistakes. There was too much tension and not enough cooperation. It just didn't work. Amidst that, Ronny decided to leave. Our new bass player, Lonnie, brought a breath of fresh air into the band. About that time, the praise and worship album was conceived. Louie and Lonnie were gung-ho for it, but the other two guys were adamantly against it. We tried to work it out. One guy only went in the studio one day. They had chips on their shoulders and made sure everybody knew it. They couldn't get along with John and Dino (Elefante, the producers), and that was the final straw. I said, 'Guys, you won't be happy in this band...with the vision I have for this band, you won't be happy in it. I think it would be smart for you to go somewhere else.' Jim was very hurt and I don't blame him. He's a good keyboard player and a good singer, but I could tell he wasn't happy, and there wasn't anything I could do for him. As for David... David and I were just too far apart regarding music styles so I said, 'You guys need to leave.'

"About that time I found the two guys who had been with me for my solo tour (Pete and Kevin).

I said, 'These guys have got unbelievable hearts, they believe in the music ministry.' So I said, 'Would you guys consider being part of Petra?' I am a very happy man now. I feel like I am a part of five guys who have a vision. Our opinions pretty much matched and we get along unbelievably well. The spirit of a Christian band has to be total unity. There has to be love, and there has to be care for each other."

Out of that answer develops a question. In your answer I heard a lot of "I didn't like...", "I decided..." and "I pulled the guy aside...". It sounds like you are the one who basically fired David and Jim. "Yes, I am."

Dave: Then you replaced them with two people from your side band. How much is Petra becoming the John Schlitt Band, rather than Petra?
John: "Actually, the only John Schlitt Band part of it is when it comes time to pay the bills. When it comes to decisions and choices, I probably have the least voice of all of them, they are very adamant about what they think. From Bob I have taken over being the spiritual leader. But as far as musical development, as a singer, I probably have less of a vote than the other four. So it would be hard for me to see it as the John Schlitt Band. For major decisions, though, I've taken over Bob's place, being held accountable for the final decisions."

Dave: Speaking of Bob Hartman, how much is he still involved with the band?
John: "For this last record, 'God Fixation1, he basically was in charge of the writing. He brought the other four guys into his basement for six weeks working on tunes that the three new guys were interested in. Bob most certainly is a part of Petra. He just doesn't come on the road anymore."

Dave: The new album, 'God Fixation', is really a drastic change in style from previous Petra albums...
John: "Well (laughing), there are three new members. The music has been totally affected by the three new guys and Louie. They came in with ideas and they showed Bob, and Bob said, 'Great, I don't have to write songs anymore... All I gotta do is come up with the words.' So there were a lot of ideas from the new guys. Also, Bob has had the last year off the road and he's been listening to what's been going on lately. He had a lot of fresh ideas, and John and Dino too. Putting all those different parts together brought in a different type of sound."

Dave: How committed are you guys to a particular musical style? How much of a role did your slipping popularity play in your decision to play "modern rock"?
John: "Petra has followed the musical styles for 25 years. We choose to use the styles of music the kids are listening to, without compromising the fact that we are a rock band. Rock encompasses many different things, from MOR to thrash. I think, to answer your question, it's all of the above. For the guys in the band, this music is what they enjoy doing. I think that this album is going to be the most fun to play of any Petra record we've ever done, because this is their baby. And it's going to be the truest live show, coming from the heart, that the band have done, initially.

"We are trying to reach the kids. If we say that we're only gonna play the stuff we want to play, and we don't care what anyone else thinks, that to me, if you're in there to see lives changed, is almost to the point of selfishness. And I believe these songs are going to be useful, they are a more current sound, and we still feel that the younger audience is the one we need to reach most."

Dave: Continuing on with that line of questioning, how committed to that style are you?
John: "I don't know yet. But I am looking forward to it a lot. I love the record. I look forward to playing it live for a while. Now when the next record comes out, I hope it's totally different. It's all trying to reach the people."

Dave: More broad than most. Any band who has been around a long time goes through changes. But Petra's changes with this new album have been much more drastic than most.
John: "I believe that's because we didn't change enough over the last several albums. We didn't change like we should have. I think we're just getting caught up. We were accused of being an arena rock band, and I think that's a total compliment. But that's not what's happening right now."

Dave: What I am wondering is if a lack of commitment to a particular style shows on the album?
John: "I don't think so. I figure the typical critic will say, 'Ah, there's a fresh new sound, but I can still hear the Petra.' Maybe not... You have opinions. Are you saying we went too far? That it doesn't sound like Petra anymore?"

Dave: That's exactly what I am saying.
John: "Well buddy, Petra wasn't selling worth a stink. Petra was going down the drain (because of internal problems), and I don't want to go down that drain yet. Personally, if it means kids are interested in a new style, I believe we can do it. If it means getting three new members to do it, I guess it has to be done."

Dave: The final question is an obvious one. Why continue calling the band Petra when it doesn't have any of its original members and the music style is so drastically different? The only real value left to the name Petra is based on sales figures, and all that, is that it is synonymous with ministry. Why not just change the name, put a new band together and continue on?
John: "This is a name that is recognised all over the world. It's still the same ministry. It's still got the same direction; the only difference is that it's a different band. Petra has gone through four major changes and if we went from that mind set we'd have to have changed every time. I've put too much time into Petra. "Name recognition is a very important thing. If they recognise the name, they'll come to the concerts. We now have to prove ourselves, to be the Petra they counted on. The real value of the name lies in its value for ministry. And this band is good enough to be everything that people have come to expect."