Petra: The US Christian rock pioneers touring in Britain

It's Wake Up Call all over Britain as PETRA, America's pioneers of Christian rock ministry, at long, long last undertake a British tour. Andrew Long spoke to various members of one of the longest running success stories in Christian rock. 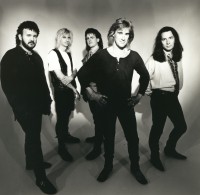 All over Britain, and indeed Europe, lovers of Christian rock will be leaping for their telephones and wallets with the news that Petra are playing Britain in May. For Petra aren't just a Christian rock band. They are THE band - an astonishing Christian music phenomenon who in their 20 years of music ministry have seen it...done it...been there...like no others.

Not that the band have retained the same personnel of course. When writing this feature I compiled a list of 13 people who had been in the band (did I miss any?), as well as a multitude of session men who have 'helped out' on the albums. With Bob Hartman as founder of the band, sole surviving original member, main songwriter and provider of that gritty power chord guitar drive that is Petra's signature, one could be forgiven for entertaining the notion that it is in fact the 'Bob Hartman Band'. Bass player Ronnie Cates is quick to dispel the idea.

"From the outside it would probably appear that way," said Ronnie, "and there are a number of things that we do entrust to our management people and to the opinion of Bob Hartman, but Bob is a very quiet, honest and humble person and it's important that everybody understands that Petra is a band with five different people and five different opinions and we all have a part in what we do and we all give our all to what we do."

The latest surprise twist in the continuing Petra family saga is the departure of keyboard player John Lawry. Lawry, who had previously recorded a solo album 'Media Alert' before his departure from the band in 1993, is going to be a hard act to follow. He was renowned for being a keyboard junkie and was never happier than when he was surrounded by disembowelled bits of electronic gadgetry and had his nose firmly jammed into a keyboard owner's manual.

John Lawry's playing dominated the techno-style 'Beat The System' and he became known for flamboyant solos featuring the sampled voices of his wife and family triggered from a mobile unit keyboard worn on a shoulder strap. Check out the 'Captured In Time And Space' video for an awesome demonstration. Singer John Schlitt explained John's reasons for leaving. "John Lawry had been with Petra for 10 years, so we were very surprised by his decision and it's been a challenging time for us as a band, but he said to us that this seemed like a time when he could leave. He wanted to do some producing and try out other new projects. The new guy that we have, Jim Cooper, was John's technical adviser for the last 18 months, so he's very familiar with the band. We didn't automatically choose him because of that, we tried out a lot of other guys too but Jim just flowed really smoothly and integrated with the band."

Petra fans who have bought the new album 'Wake Up Call' and see Lawry's name credited as keyboards player and his casual stance in the centre of the band shot will be surprised to learn that his contribution to the album was minimal, just one lead part and half authorship of one song. "John had already decided to leave before we recorded 'Wake Up Call'," explained John Schlitt, "but we still wanted him to contribute something to it and to be able to credit him for that. We had a lot of other guys in to help out." They sure did -take a look at the 'Special Thanks' listing.

In the early 70s a revolution swept across America, taking the continent by storm and affecting every aspect of American life. It was known as the 'Jesus Movement'. America's hippies were fast becoming disillusioned with the guru-led Eastern mysticism trend of the late 60s and their spiritual search was leading them into the light.

The Jesus Movement led to the birth of 'Jesus Rock', a very small seed that over many years has blossomed into the fruit that all Cross Rhythms readers love to partake of. A lot of those old Jesus Rock albums are, in truth, pretty awful. It was a time when anyone who could put well-known scriptures and Christian clichÃ©s to three chords and bash them out on a tatty old acoustic would find it relatively easy to get a deal. But pioneers did begin to achieve recognition. Artists like Barry McGuire, the Resurrection Band, Servant and the granddaddy of Jesus Rock, Larry Norman were drawing a great deal of attention for the quality of their music and the integrity of their message.

It was into this rapidly developing musical scene that Petra was born. Bob Hartman and his friends from the Christian Training Academy in Fort Wayne, Indiana, began to take their music out to anybody who would listen; schools, youth clubs, parks. Their vision was to play great music that young people would love and to preach the gospel with no compromise. They soon attracted the attention of Word Records and cut their eponymously-titled debut in 1973.

No one could have foreseen at that time how big an impact Petra was to have on Christian music - they have been one of the major ground breakers. It is certain that nine out of 10 Christian musicians on the scene today, no matter what their particular style, would cite Petra as an influence and an inspiration.

In their 20-plus year history they have notched up 19 'proper' albums, including four compilations with such dubious titles as 'Petrafied' and 'Petraphonics', which John Schlitt told me were not really thought of as legitimate albums by the band. Amongst their major achievements you would have to include the fact that the 1983 'More Power To Ya' album was the first Christian rock album to sell more than 100,000 copies. As well as the fact that in 1991 they were the first Christian rock band to win the Gospel Music Association 'Group Of The Year' award. That year also brought them a Grammy for what was arguably another classic album, 'Beyond Belief, as well as eight simultaneous CCM Magazine reader's poll awards.

Over the years Petra have explored many different musical avenues, from the early country/blues sound to the east coast harmonies of 'Washes Whiter Than'. Experimenting with hi-tech for 'Beat The System' and dabbling with Motown and black gospel on 'Unseen Power' the underlying theme has always been one of gutsy guitar-driven AOR and the one element that Petra have always guaranteed is an up-front, no-compromise approach to the gospel. Whilst many CCM artists have 'crossed over' into the more lucrative secular scene, Petra have always stuck to their guns.

"Petra was originally founded as a ministry to tell people about Jesus Christ, that is the most important thing in our lives," explained Ronny Cates. "I think it's very important that if you're a Christian people around you should be able to tell that you're a Christian, so you should live your life worthy of the calling of Jesus Christ. People have to accept or reject us for who we are. If God opens the door for Petra to be played on MTV or pop radio then that's great, but it will be because we're Christian and we will continue to be very verbal about that."

Their fans certainly admire the undying commitment of the band and recognise the sincerity of their ministry. People come away from a Petra concert feeling uplifted and challenged. "I am very conscious of the fact that young people look up to the groups that they listen to," continued Ronny, "but everything that happens during a Petra concert is not directed toward us, but directed towards Jesus Christ. So by the end of our concert people don't have a chance to idolise us, because the whole time we're drawing the attention to Jesus Christ. When people come to our concerts they'll never question whether or not we try to have the attention on ourselves."

This kind of conviction has always been the driving force behind the band's longevity. It was in 1986 when vocalist John Schlitt joined Petra's ranks that the band really hit their stride and entered the vistas of statisticians' dreams selling, literally, hundreds of thousands of albums and leading, literally, hundreds of thousands to faith in Jesus. But after six immensely successful albums with stadium rock producers supreme Dino and John Elefante culminating in the Grammy Award winner 'Unseen Power', the band asked producer Brown Bannister to pep up the sound. The resulting album 'Wake Up Call' with its real drums (no electric enhancement), slick harmonies and 90s production touches encouraged the reviewer for America's CCM magazine to enthuse "it's been quite a while since Petra have sounded this contemporary." So far big sales of 'Wake Up Call' have supported that journalist's enthusiasm.

"We wanted to try something different and Brown has really proved himself as a rock producer," stated Bob Hartman in a recent press release. "This album is probably the most indicative of who Petra really are. With Brown we were able to record in Nashville, which was great not only because we could be at home with our families, but also because we were able to be very hands-on in the arrangements and production. We didn't want a radical change stylistically, but Brown gave us the creative freedom to try some different things."

"There's been an extreme response to 'Wake Up Call' in both directions," said John Schlitt. "It's a new sound, a different sound, exactly what we were looking for. Some people got used to what we were doing with John and Dino and that's what they like, but others have said that they think this is the most exciting and the best album we've ever done."

The album title comes from the song "Sleeping Giant" which Bob sees as the theme song of the album. "It's about waking up to who we are in Christ," continued the press release. "A lot of the songs on the album reflect that theme of 'getting off the couch' and getting serious about faith. I think that kind of message goes well with the sound of the music that we play; it's forceful, both the message and the music."

In May of this year British Petra fans will have the opportunity to catch their live act as part of the European 'Wake Up Call' tour. This will be their third visit to the UK. "I'm more excited about this trip than the last one," John Schlitt enthused. "The European market has really accepted us as a genuine Christian band and I'm very pleased that we can now include Europe as part of our regular route."

22 years, 19 albums, 13 members, umpteen compilations and videos, three labels, countless live appearances: how long can all this go on? How long before the dinosaur lies down? "If you'd asked me that five years ago I would probably have estimated five years," said John. "But there seem to be a lot more opportunities for us now than there were five years ago. So I guess we can keep going as long as we all stay healthy and the kids enjoy our music. Could be a long time to come, but who can say? We're all getting older!"