Rich Mullins: A poet for the common man bucks the CCM stereotypes

The scene is Youngstown, Ohio, at the Holiday Inn Convention facility that is being completely overtaken by teenagers for the weekend-a frightening thought to be sure. It's the Ohio Baptist Youth Fellowship Convention (BYF), and this year they have chosen their theme from a song that not only hit the top of the CCM charts and received a Dove nomination for Song of the Year last year but may well end up in your church hymnal soon. The theme (and the song) is "Our God Is An Awesome God", and its author, Rich Mullins, is scheduled not only to provide a concert for the second night of this convention, but to be its primary teacher for the course of the weekend.

And at the opening Friday night session, to the strains of the aforementioned song, the man who opened for Amy Grant's Unguarded tour and wrote her mega-hit "Sing Your Praise To The Lord" takes the stage dressed in a bowling shirt, and a pair of seriously ripped jeans which will adorn him for the duration of the conference. "I like to travel light", he says to me later, with a sly grin that tips its hat to his Irish origins and lets me know this could be a tricky interview.

It was, of course. Not because of any purposeful evasiveness on his part, but due to his seemingly indirect way of answering my questions. The answers were always better than the questions anyway and different, in a way not dissimilar from the young Hebrew who dominates the New Testament, who answered His difficult queries with stories and ideas that had 'em thinking for days.

It was only fitting though, from a guy who made a conscious decision a couple of years ago to step off the big stages and move away from Nashville, to travel to Third World countries and go back to school at a Quaker college in his new home base of Wichita, Kansas, all the while turning out some of the most creative and thought-provoking songs in contemporary Christian music and ministering with a guy named Beaker under the banner of a religious order in the tradition of St. Francis of Assisi-at youth retreats like this one.

At the BYF Convention, it's positively unglamorous for Mullins, and just the way he wants it. Talk about de-mythologizing! "I don't want to be put up on a pedestal, 'cause I don't want to have to take the fall, I want people to listen to what I have to say because I'm real, not because I'm flashy. When Christ met the rich young ruler, the first thing he did was look at him. A lot of Christian musicians don't look at who they're singing to. That's an O.K. attitude if you're there to entertain, but I don't think ministry happens when the person you're ministering to is invisible.

"You know what? The world is full of musicians. What the world is starving for is Christ. If I wanna just go to a concert, I'll go to see the Chieftains, or a symphony, or a jazz concert, or a rock concert. But when I go to a Christian concert, I want to be reminded that He is a loving God, and that He has forgiven me, and there is hope".

A Rich Mullins concert is full of hope. It's also full of a lot of other things you won't see at most "professional" rock concerts. Like the presence of "non-professionals" on the stage, instruments you might not have seen before, a lot of rough edges on a gem we're used to seeing buffed and polished. A lot of life.

When Mullins took the stage Saturday night for his official concert-part of the weekend, he looked virtually no different to the attending kids that he had spoken to that afternoon in his teaching session. Well, he had changed out of his bowling shirt-into a Friends University sweatshirt. And his hair was pulled back into a ponytail, which I suspect was more for convenience. But the ever-present jeans stayed on (barely), and the effect was pretty underwhelming. The concert got started in the same manner,' with Beaker, a guy who has only played the guitar for 10 month.;, leading the group in a simple praise chorus he wrote called "Step by Step", instead of kicking in with one of Mullins' many number one hits.

But by the time he pulled a hammer dulcimer on his lap to lead Avenue G (a local Wichita band Mullins has been touring with) through a series of songs that incorporated in it the recent "My One Thing" among them the room was alive with a spirit and energy equal to that at any U2 concert. Maybe it's something in his Irish blood, but Rich could have been Bono's brother leading this crowd in the dramatic closer, "I See You", which had us all singing a cappella, not unlike U2's "40". And the rafters shook when we sang "Awesome God" that night, followed by Rich's virtuoso performance of "Sing Your Praise to the Lord" his first song to be recorded on a major label by a major artist - which presumably changed his life, Or did it?

"I had been singing that song for years. None of my peers were into Christian music, and a good many of us didn't even know who she (Amy Grant) was when she recorded it. I wrote it because I was practising Bach's C Minor Fugue, and when I got to where I could play it decently, I just didn't want to quit, so I wrote the introduction, which led to the song. I hope Bach would like it. His music is way more important than the Christian music you hear now, I'm not saying today's Christian music has no value, I'm just afraid that we miss the real value of it, and use it for something it's no good at. It's value lies in its ability to point beyond itself to Christ."

Guess I shouldn't have been surprised at his reaction. After all, this was the guy who moved away from Nashville. "Hey, a career is only so important anyway, I remember in my senior year at high school thinking, "If I am going to be resurrected someday and stand before God, and live forever with Him after only 90 years or so here on Earth, then my relationship with God has got to be my top priority. That's when I decided to go to Bible College, and that type of thinking has led me to a lot of decisions since, because nothing else makes sense. I keep looking at people, who have chosen other priorities, and maybe their life isn't necessarily more miserable than mine, but it's certainly no better. In many ways, I have a far better way of living." 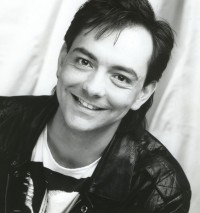 And Mullins' "better way" has led him to be in Youngstown this weekend. He says the reason has something to do with incarnation. "People are naturally interested in people more than ideas. People want relationship, and are naturally interested in incarnation. They want to see someone who embodies ideas. These kids could have spent a lot less money on a book that would have given them more to think about, for a longer period of time, than it cost to come to this retreat. But it would not be incarnate to them. It's not good to be alone anyway, and libraries are lonely places." But wait a minute. Isn't this guy single and spending a lot of time in school libraries? This guy who wrote "Doubly Good To You" a song about the joys of spending your life with a helpmate?

"Yeah, somebody said to me, that is one of the most hurtful songs I've ever heard, because it implies that God hasn't been "doubly good" to single people," and I said, "You're right. But God doesn't have to be good to anybody. He doesn't owe us the breath we breathe. I figure God has given us salvation, that's way more than we deserve, and I won't judge Him for not giving me something else.

"It's very dangerous to be alone though, and I'm very grateful I don't have to be anymore, 'cause I was alone when I was in Nashville. I made the mistake of not locking into a church body right away, 'cause I think we are not Christians alone, we are Christians in the body of Christ. I was attending a church, but I had not incorporated myself into a body of believers in such a way as made me accountable."

Recently, for whatever reason, I don't know I have discovered Rich Mullins on YouTube and in his books. I have looked up everything about him that I can about him. He grew up about thirty miles from a town I lived in as a child...where I loved. I have grieved over a man I never met! I want to hear more of his music but mostly his teaching. I just thought I would like to say this somewhere. I write poetry myself and I covet to influence for Christ in the way Rich has for me. I thank God for the ripple of the pebble He dropped in the pond that included Rich's life.