Richard Lennox: The "concert pianist" with a taste for pop, rock and jazz

Although Richard Lennox will be the last person to tell you he's a household name, his musical achievements are substantial. He's been advertised as a "concert pianist" though his debut album 'Calm Beneath The Storm' takes in rock, jazz, pop and more. In his own words this supremely gifted piano and organ player plays "Bach to The Beatles, musical theatre to rock and roll and just about everything in between." This renaissance man has played several times on BBC's Songs Of Praise, worked extensively in theatre, performed solo concerts for major cruise lines like P&O Cruises and performed in the prestigious Royal Albert Hall. Born and raised in Weston-super-Mare, Richard first discovered the piano when he was three. Primarily a self-taught musician, he has now mastered the piano, organ, double bass and the art of arranging, producing and composing music. He is also contracted by his local church, St Martins, to play the organ every Sunday. In a Cross Rhythms studio I talked to this virtuoso musician.

Richard began by saying, "I know it sounds strange but I'm trying to specialise in as many areas as possible. It's just about doing as many concerts as possible and combining it with the crossover music that I've developed." He wants to branch out further into more areas of music, particularly in his live shows, "mainly rocked up classics along the lines of what the '70s rock band Sky did and trying to revive that."

Richard spoke about his album 'Calm Beneath The Storm'. "It's very much along the crossover lines. Tracks like 'Marriage Of Figaro' and 'Queen Of Sheba', there's some quite lyrical stuff on there. The song 'Flower Duet' is normally done by two sopranos. It's an orchestrated version with the piano backing but it's given that sort of symphonic treatment. 'Calm Beneath The Storm' is a 'promo' album and it would be great to do it with a full orchestra and real musicians. As you can probably tell from the CD it's all sampled. All those orchestral parts took six to eight hours to lay on some occasions because we were experimenting with the sound so much, but that's what made it great fun. It made it really exciting because you could do everything yourself and I took a lot of pride in that." 'Calm Beneath The Storm' was released independently in 2009 and the following year Richard issued a download EP 'Winter Toccata'. 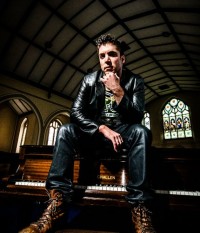 Richard has worked with pop and jazz bands and for musical production shows. He also worked on HTV's eight-part TV series Talent Trial as the musical director and he recorded the piano track for Tim Fywell's film I Capture The Castle in 2003. As well as all this he has also performed on cruise liners including P&O Cruises. I asked Richard how that type of engagement differs to his usual concerts. "It's not that much different. People come along not expecting anything really. I've even had some people say, 'We sat on the end of the row in case we didn't like what you did' and they were hooked right from the start because they're half expecting something else," he laughed. "I'm billed as a concert pianist not a crossover artist because it's such a difficult thing to publicise. It's not like an Abba tribute where you put up a poster and everyone knows what they're going to get. It's quite a difficult thing to publicise. You get those people who know what you're going to do - they either know you, they've heard of what you're doing or they're just curious. You're hitting more markets there and hopefully that's what's going to build the audience. But to actually get people saying 'we came along, we didn't know what to expect and then we really enjoyed it' is great. That's half the battle."

Richard has also featured on BBC's Songs Of Praise in 2008. I asked him about the experience of working on the longest running, most watched religious programme in the world. "It was a totally different experience. I went in and we did two days and two programmes in different venues. We went to the BBC in Manchester, recorded the two songs with the choirs and then we did the final the following week which was done in another venue. I got the chance to arrange the piano and the organ. I played piano and another guy played the organ. They made quite a big thing out of us being there and they were being quite virtuous about what we were doing and the fact they were our own arrangements. It was a really great experience, it was almost like walking onto a film set in this large abbey in Manchester. It was a great experience and I can't wait to do it again."

Richard told how he managed to come by such a major opportunity. "I had worked with an orchestra that do annual Christian events and it was through the conductor who takes charge of those events. One of the editors from Songs Of Praise rung him up and said, 'Have you got anybody that would be suitable for doing these arrangements and playing on camera?' Fortunately he gave them my details which I was very grateful for. The next thing, I had a phone call from this guy and he said, 'Could you put this together?' and it was the Songs Of Praise School Choirs competition."

I asked Richard what it was like playing at the Royal Albert Hall. "You can picture it on the TV with the camera angle pulling away looking at the orchestra and the organist from 30 feet in the air. It really is a fantastic thing. And to play a hymn with 6500 people, which is the largest congregation that a church organist could ever wish for, is an unbelievable experience. I've done it for probably five or six years on the trot now. Last year I did a solo with the orchestra. Sometimes I'll get to do the piano work as well. Four years ago I actually did a piano solo in the first half and an organ solo in the second, which was a fantastic thing to do. It's a very good platform building process."

Richard was raised in a Christian household. His parents were the caretakers of a Methodist church in their hometown of Weston-super-Mare. I finished our chat by asking him about his time away from showbiz and touring. "I play at my local church on a Sunday. I've had the job for about a year and a half. That job is just mixed with general freelance work. I work in a performing arts college four days a week and it's the college work and the church contract that actually give me the most financial security. It's by no means flush but it stabilised the ship financially because it's such a precarious business."

The opinions expressed in this article are not necessarily those held by Cross Rhythms. Any expressed views were accurate at the time of publishing but may or may not reflect the views of the individuals concerned at a later date.
About Kate Nesta

I saw Richard on Tuesday evening at a concert in Princes Hall, CLEVEDON, when he performed with Miscellany. It was an absolute delight.
Richard's playing of an arrangement of familiar Christmas carols, heavily disguised, was one of the most fascinating pieces of music I have ever heard.
Can't wait to listen to him again.

Well, he's OK here and there (just kidding mate!) I have had the privalage to play with him in a music festival, a duet on the same piano-its so long ago now, you will have to ask him what the piece was!. All in all, fantastic! Fantastic, fantastic!!! P.s. it was good to see you at the theater the other night, even though you did put me off my magnifisant rendition of Beethoven's Moonlight Sonata!! (I did recover though, I think!? Lol

I am just back from taking a group of care home residents to Blakehay Theatre where we were all absolutely blown away by Richard's talent. I'd love more of our residents to enjoy his playing.

Our home has a fabulous piano....any chance he might come up and play for us one day, I wonder?

At the present time I work as Richard's PA, as he is looking for management/agent.
He is an amazing guy, with an amazing gift of music!
Richard really deserves to make it to the top of his carrer, its just a case of getting the right people on board! So will be delighted to hear from management/agents who may be able to help!
Val.