Richard Reid: Looking for a city

How does a self-confessed rebel from the mean streets of Glasgow get himself invited to the White House? Trevor Kirk spoke to singer/song writer RICHARD REID to find out. 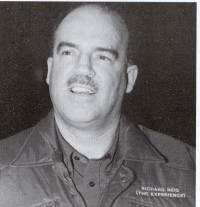 Talk to Richard Reid and you'd think that here was an ordinary Glaswegian; the accent, the figures of speech he uses, are typical of one brought up on a working class housing estate in the Glasgow of the '50s. "I was a head case," Richard told me; "not so much a juvenile delinquent as a rebel. I left school as soon as I could, I didn't get a school-leaving certificate, they just told me to go! I learned the basics, how to read and write and add up, but not much more; I couldn't hold down any sort of regular job until my mid 20s." However, from these unpromising beginnings has blossomed a music ministry that takes him to the USA on a regular basis, into the Faslane nuclear submarine base, onto US Navy warships and aircraft carriers and even into the White House itself.

After Richard made his decision to follow Jesus in 1984, he began to play the guitar and try his hand at songwriting. "It's a real inspiration from the Lord; there's no way I can put something like a song together on my own." His first proper album, after a few strictly demo quality recordings, came in 1992, 'Can't Make It Without You', an eight-song CD recorded in a bedroom-cum-studio in a friend's flat in Glasgow. In spite of the budget (what's a budget?) available, and due to the engineering skills of Andy Thornton of Late Late Service fame, the end product was very good. A cassette EP was released the following year to help raise funds for the running costs of an orphanage in Romania; 'We Can Do More' paved the way for a full album in 1994 entitled 'I Can Do All Things', which benefited from the facilities at Heaven Studios in Glasgow and the assistance of Steve and Charlie of legendary jock-rock band Lies Damned Lies.

I asked Richard about his charity work and discovered that his newest grandchild, Samuel Joshua, born last September, has spent his entire short life in the Intensive Care Unit at Glasgow's Yorkhill Children's Hospital. "A lot of the proceeds from gigs and album sales are going to Yorkhill, it's my way of saying thanks to the staff for the way they've looked after him. Incidentally, he's named Joshua after the greatest warrior in the Old Testament, because he's been battling all his life just to live."

The new album 'Looking For A City' was put together at Chapel Lane Studios last year and features ex-Dire Straits drummer Terry Williams; read Mr Editor Cummings' review elsewhere in this issue. "I think it's come out very well," says Richard, "plenty of good songs. I'm pleased. I've sold it myself so far, but we hope to get a distribution deal soon." Meanwhile, his transatlantic journeys continue; he's off to the prairies of Minnesota in April for another church tour of ministry and music. "I've previously only gone over about twice a year. I can't go too often, otherwise I'll be neglecting my window-cleaning business, even though I'm the boss, and I've got my son working for me, but no sooner do I get back, than the phone rings, and they're asking me, 'When are you coming again?' It's a real privilege to serve the Lord this way."
Trevor Kirk is a broadcaster with UCB